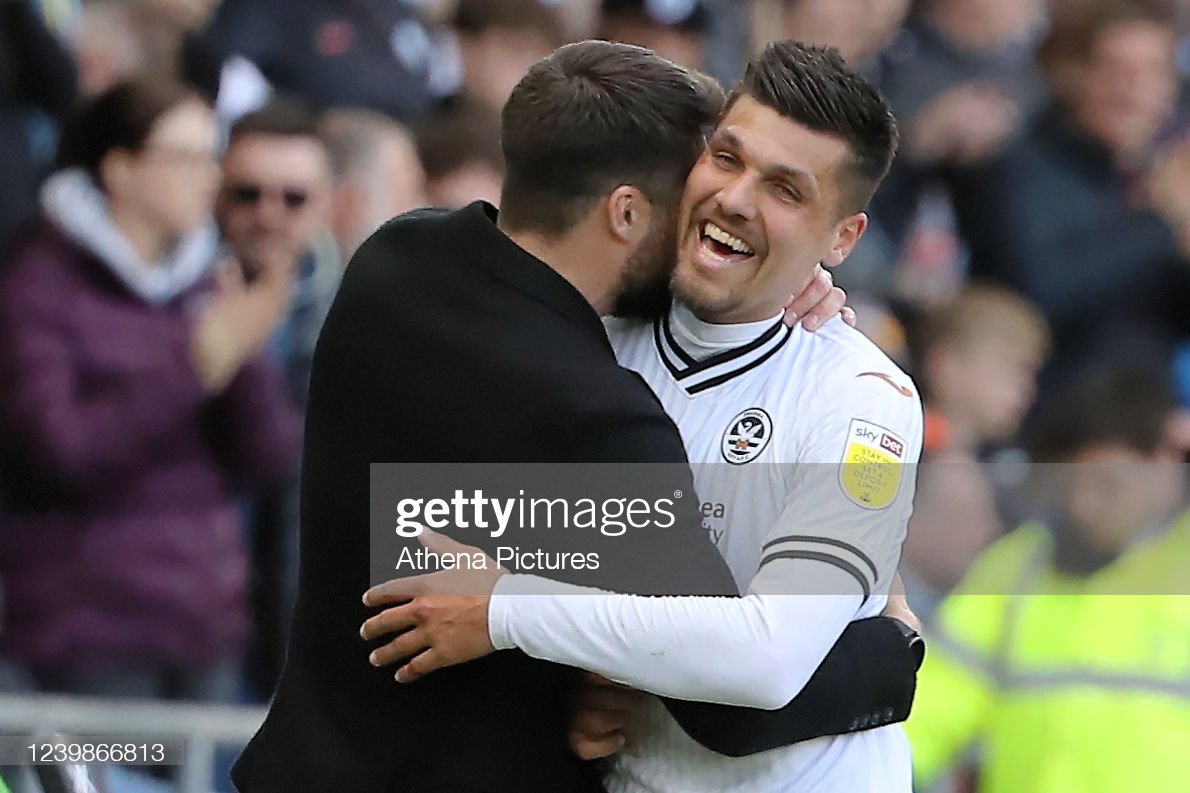 Swansea City head coach Russell Martin is bracing himself for a summer spent fighting off interest for the club’s 20-goal striker Joel Piroe.

The Dutchman scored two stunning goals in his side’s 2-1 victory over Derby County on Saturday to become the first Swans player since Oli McBurnie three years ago to reach 20 goals in all competitions in a season.

The 22-year-old joined the Swans for a bargain £1m from PSV Eindhoven last summer, but already looks worth 10 times that figure after a stunning debut season in the Championship.

Asked if he expected the club’s owners to have to deal with offers for Piroe at the end of the season, Martin admitted: “We’ll have to wait and see.

“If it’s something we have to cross in the summer, we’ll try and deal with it. Of course, we want him to be here for as long as we possibly can.

“He’s a beautiful footballer and a brilliant finisher. He just needs to continue with the same attitude.

“There’s a lot more to come. He’s only a young man in his first season here so it excites us a lot that we still think there’s a lot left for him to get out of himself.

“I think that’s one of the reasons we were brought in, to play in a way that would improve the players, add value to the players and create assets for the club.

Piroe was used as a main central striker in the first half of the season and hit the ground running with 13 goals in his first 23 matches.

He then went seven games without scoring and was moved into a more withdrawn role to accommodate Michael Obafemi.

The Netherlands U20 international has responded with seven more goals in 11 games, including two superb first-time efforts to open up an early 2-0 lead over the Rams.

He might even had a first-half hat-trick but skied a difficult chance over the bar and Martin expects Piroe to make further rapid improvements.

“We said that from day one, that was part of the role.

Joel Piroe becomes the seventh different Swansea player to reach 20 goals in a season since the stadium move in 2005. All from open play! Remarkable.

“But the best chance we have of getting to where we want to get to in a period of time is to try and keep a group of young men together that continually improve and grow.”

Piroe’s sweet first time efforts put Swansea into a 2-0 lead inside 16 minutes, but they were left hanging on after Tom Lawrence’s penalty made it a tense finish.

Derby manager Wayne Rooney was incensed his side were denied a penalty in added time when substitute Bartosz Cybulski tangled with Swans defender Ben Cabango.

“I hope the referee gets banned and fined because that is not good enough,” stormed Rooney.

“We’ve got a good young group of players who are working hard to try and help this club get through the difficulties it’s going through.

“We’ve got a young player coming on for his second game, he gets wrestled to the ground and the officials don’t see it. It’s crazy!

“You can ask what do we do? Do we get VAR in? But officials are looking at VAR on a screen and still getting decisions wrong, so I don’t know where we go.”

Wayne Rooney: “they’re probably the most difficult team to play against” pic.twitter.com/jdorcruRXI

The defeat – Derby’s third in five games – leaves them looking near enough doomed as they are still nine points from safety with only five games left.

It might have been a different story if they had shown the same application in the first 20 minutes as they did in the last, but the Swans had it too easy.

Piroe clipped in a beauty for his first from the impressive Hannes Wolf’s cross and then pounced on an error by Curtis Davies to curl home a second.

A foul by Swansea keeper Andy Fisher on Luke Plange enabled Lawrence to pull a goal back with a spot kick, but the Rams have only scored more than one goal in a game once in 11 matches.

Rooney admitted: “We know we’re in a difficult position with five games to go but the players will give everything for those five games.”

What they lack is a natural scorer of Piroe’s quality.

Martin’s side now have four wins and a draw from their last five games and could even make a late tilt for the play-offs if they maintain that momentum.

“I don’t think the play-offs are in my thinking at the moment, but the players may be different,” added Martin.