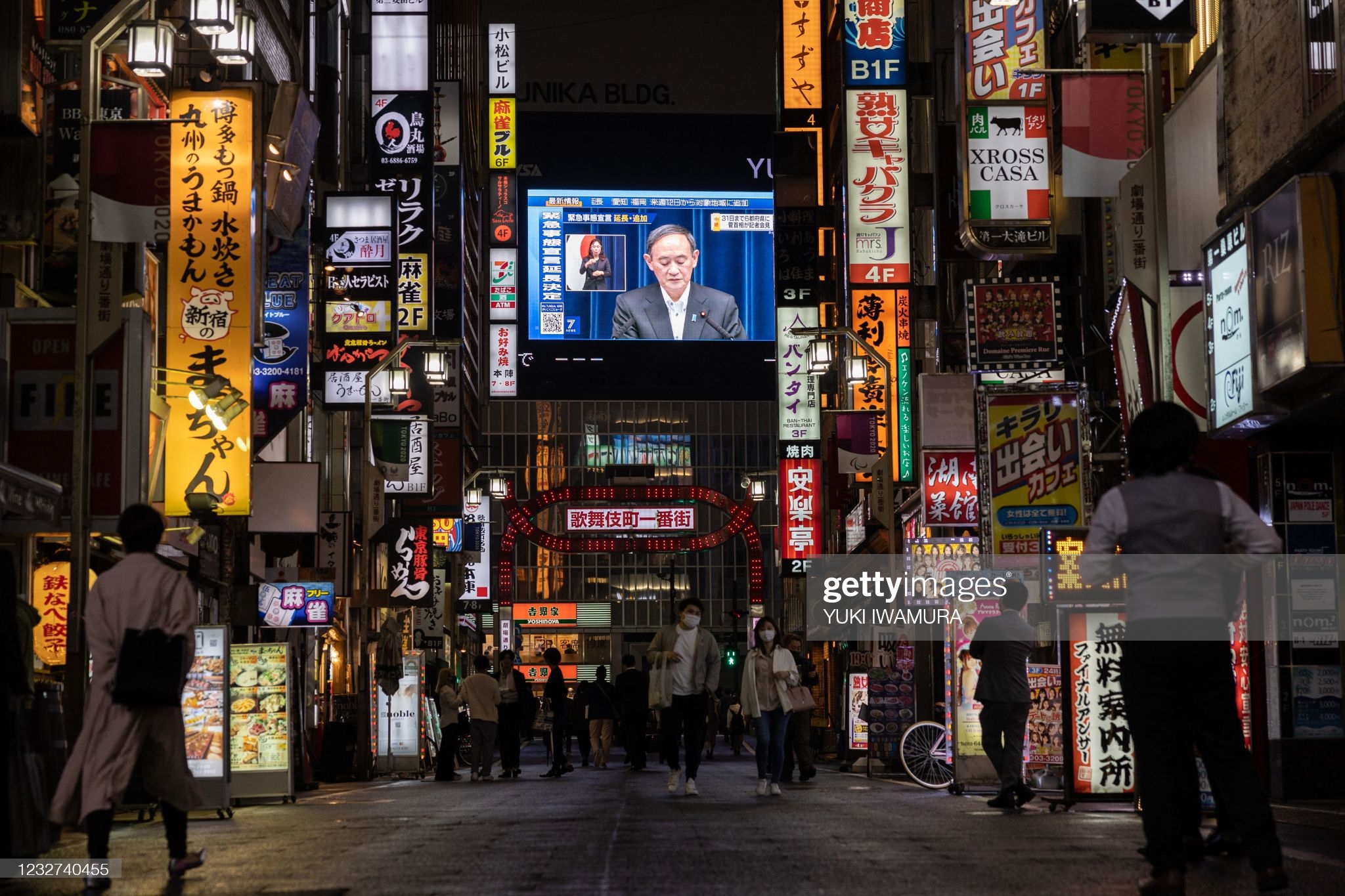 A screen shows Japanese Prime Minister Yoshihide Suga speaking during a press conference to announce the extension of a coronavirus state of emergency, in Tokyo. Pic: Getty Images.

Tokyo’s state of emergency has been extended until the end of May in a bid to tackle rising coronavirus infections – placing more doubts over the staging of the delayed Olympic Games.

The Japanese capital is due to host the Games in just over two months’ time, with the Paralympic Games to follow.

But Japan extended a state of emergency in Tokyo and three other areas until the end of May to stem a surge in novel coronavirus cases, although Prime Minister Yoshihide Suga reiterated that it was still possible to host the Tokyo Olympics just months away.

The government had hoped a “short and powerful” state of emergency would contain a fourth wave of infection, but new cases in major cities such as Tokyo and Osaka are still at high levels, Suga said, announcing the decision.

Extending the state of emergency to May 31 from May 11 will leave a margin of less than two months before the July 23 start of the Games, which were postponed last year due to the pandemic.

Responding to a question about the public’s continued unease about hosting the Tokyo Olympics, Suga reiterated that Japan would be able to host a safe event while following appropriate virus containment measures.

“We are putting all our efforts into stemming the spread of infections,” Suga told a news conference on Friday, after acknowledging that he was “aware” of concerns from the public about the Games. Suga said Olympics organisers were considering a series of anti-virus measures that would protect the health and lives of the Japanese public.

“We believe it is possible to host a safe and secure Olympics,” he said.

Suga, noting that speeding up vaccinations was the best defence, promised to fast-track the government’s efforts on that front and said it aimed to administer 1 million shots a day. Only around 2 percent of Japan’s population has received at least one dose of the vaccine.

The president of the Tokyo 2020 organising committee, Seiko Hashimoto, told reporters at a press conference that it would be “very difficult” for her counterpart at the International Olympic Committee, Thomas Bach, to go ahead with a planned visit to Japan in the next few days.

The IOC said no dates had been fixed for Bach’s visit yet.

Last week the Games organisers released an athletes’ playbook – effectively rules they must follow once in Japan.

Athletes are set to be subject to daily tests, asked to wear face coverings during medal ceremonies and quarantine on the day of arrival and the next three days.

The British Olympic Association was handed a boost on Thursday in its bid to vaccinate all its athletes and support staff prior to the start of the Games.

Under a deal struck between the IOC and pharmaceutical giant Pfizer, vaccines will be made available to athletes in nations not in a position to prioritise jabs for those heading to the Japanese capital.

Games organisers have already taken the decision to bar overseas spectators from attending. A decision on how many – if any – Japanese fans can attend is due to be taken next month.

The Olympics are scheduled to run from July 23 to August 8, with the Paralympics taking place from August 24 to September 5.

But a petition calling for the cancellation of the Games due to the pandemic has received more than 200,000 signatures in two days.

The petition has been addressed to Bach and International Paralympic Committee President Andrew Parsons.

In excess of 223,000 people have now signed the petition, which says the Games should be stopped to protect the lives of people in Japan.