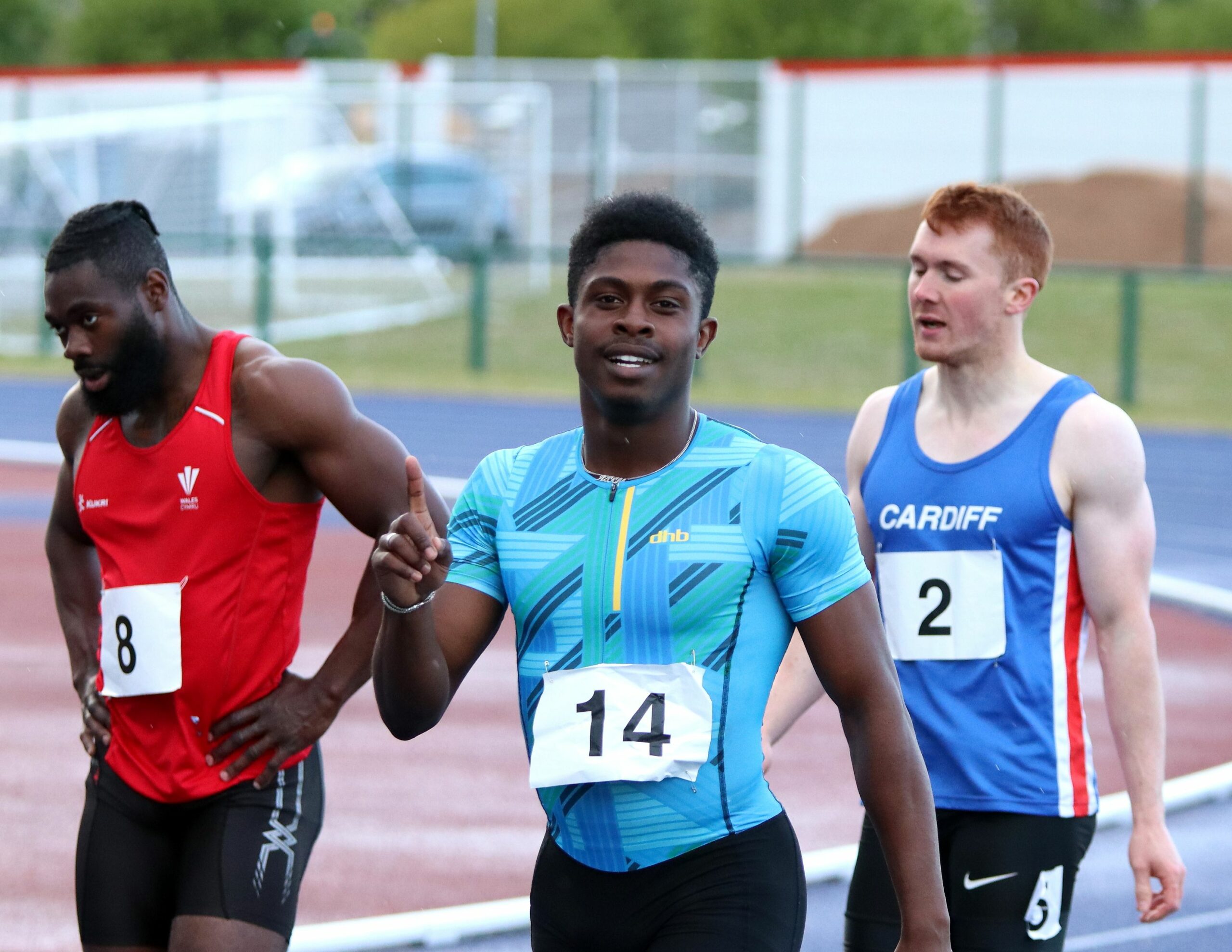 Two years ago Welsh sprint sensation Jeremiah Azu had European Under-20 gold within his grasp when disaster struck.

The Cardiff athlete was just yards from victory in the 100m final when he pulled up sharply, clutching his hamstring in agony.

The then 18-year-old’s challenge ended in pain and anguish, face down on the Ryavallen Athletics Stadium track in Sweden.

But now the trademark smile is firmly back on Azu’s face as he builds towards trying to put those memories behind him at this year’s European Under-23 Championships in Norway.

The 20-year-old produced two blistering performances in bitterly cold conditions at Wednesday night’s Run With the Wind event in Cardiff.

Run With the Icy Arctic Blast would have been a more appropriate title for the meeting as heavy showers punctuated brief sunny spells and a biting wind dominated proceedings.

But Azu made light of the conditions as he won his heat in a wind-assisted time of 10.52 and then clocked 10.54 an hour later in the elite 100m final as the weather deteriorated again.

“I’m in good shape. It’s still early in May. I think this is the earliest I’ve opened up – it was the 25th of April I think and that’s my third one already. So, yeah, I’m feeling good.

Azu is delighted to be back competing following two years disrupted first by injury and then the pandemic.

“I’ve missed this feeling,” said Azu looking out over The Cardiff International Sports Campus after his races.

“It just made me feel genuinely happy. There’s no better feeling than competing for me. I really feel happy today, especially.

“The first round was okay, the sun was out a bit, but for the second round the sun dropped and it started raining just after we finished, so it wasn’t too bad.

“It was fun today. Regardless of the weather!”

Like all athletes, the past year has been a challenge for the young Welshman.

#project19 didn’t go to plan but I’m grateful to God for how far he brought me. Onto next year for that #ClearVision 👓 pic.twitter.com/YqLtYMPXEa

“Last year was terrible. Nothing was open for anyone. But then September to December here was open outdoors.

“It was difficult because I’m normally indoors that time of year because it’s cold but we were able to train. Then, in January, everything shut again.

“It’s just been difficult because I’ve been by myself. Normally, I’m used to being in a group, vibing off everyone.

“But I’ve just had to be grateful because other people were not in my position. So, I made sure I turned up every session. Just work hard, get work done. And I’m here completing and enjoying it.”

Now he is starting to reap the rewards of that hard work, looking forward to the summer and unfinished business at the Europeans.

“I’ve never felt this this good about athletics and I’m really enjoying it,” says Azu, who was the fastest teenager in Europe going into that final in Sweden two years ago.

Having cruised through the rounds, Azu was clear of the field after 60m when injury struck and ended his race.

With a 10.37 clocking, Great Britain’s Jeremiah Azu qualifies fastest for the 100m final in #Boras2019. pic.twitter.com/wiORzBvh5d

“I need to be there. I need to go back. Certain people think they won that race, but everyone knows what happened!”

There’s also the small matter of the Tokyo Olympics looming on the horizon later in the year.

Still smiling broadly, Azu refuses to be drawn on the subject, saying: “I don’t want to put any pressure on. I’m just going to run. I’m not going to think about times. I think I just need to enjoy my running. And that’s what I’m trying to do.”

A number of other young Welsh athletes enjoyed competing at Wednesday’s event, including Caitlyn Mapps, who was the fastest under-20 female on the night as she clocked 12.17.

In the 200m, the Cardiff Archer posted the fastest women’s time across the five races as she stopped the clock on 24.31.

Earlier in the week, the sprinter was celebrating her inclusion in the British Athletics Futures Relay Programme.

An excited Mapps said of her call up, “It’s a great opportunity.

“I’m just excited to meet the team now and start training. It means I’ll have to train a lot harder now and grow with more elite athletes.

As for the rest of the season, the youngster said: “I just want to run PBs really. I ran a good time just now but the wind was quite strong, but I haven’t run sub-25 in the 200 for years so I’m really happy.”

Mapps also has one eye on a place at next year’s Commonwealth Games in Birmingham.

“I’m going to try my best, hopefully I can get the qualifying time.”

Another rising Welsh sprinter who looked in fine form was Cardiff Archer Nell Desir, who ran a fastest 100m time for an Under-15 athlete – male or female – by some distance as she clocked 12.70.

But it wasn’t all about the juniors on Wednesday, as a number of established athletes also shone through the frequent downpours.

Swansea Harrier Dan Beadsley was the fastest man on the night over 200m, clocking 21.28.

In what were testing conditions for the long jumpers, another Welsh Commonwealth Games athlete, Rebecca Chapman, posted a best jump of 6.05m.

Full results for the Run With the Wind event can be found on the Welsh Athletics website.

3 thoughts on “Jeremiah Azu Finally Has The Wind At His Back . . . And Redemption On His Mind”