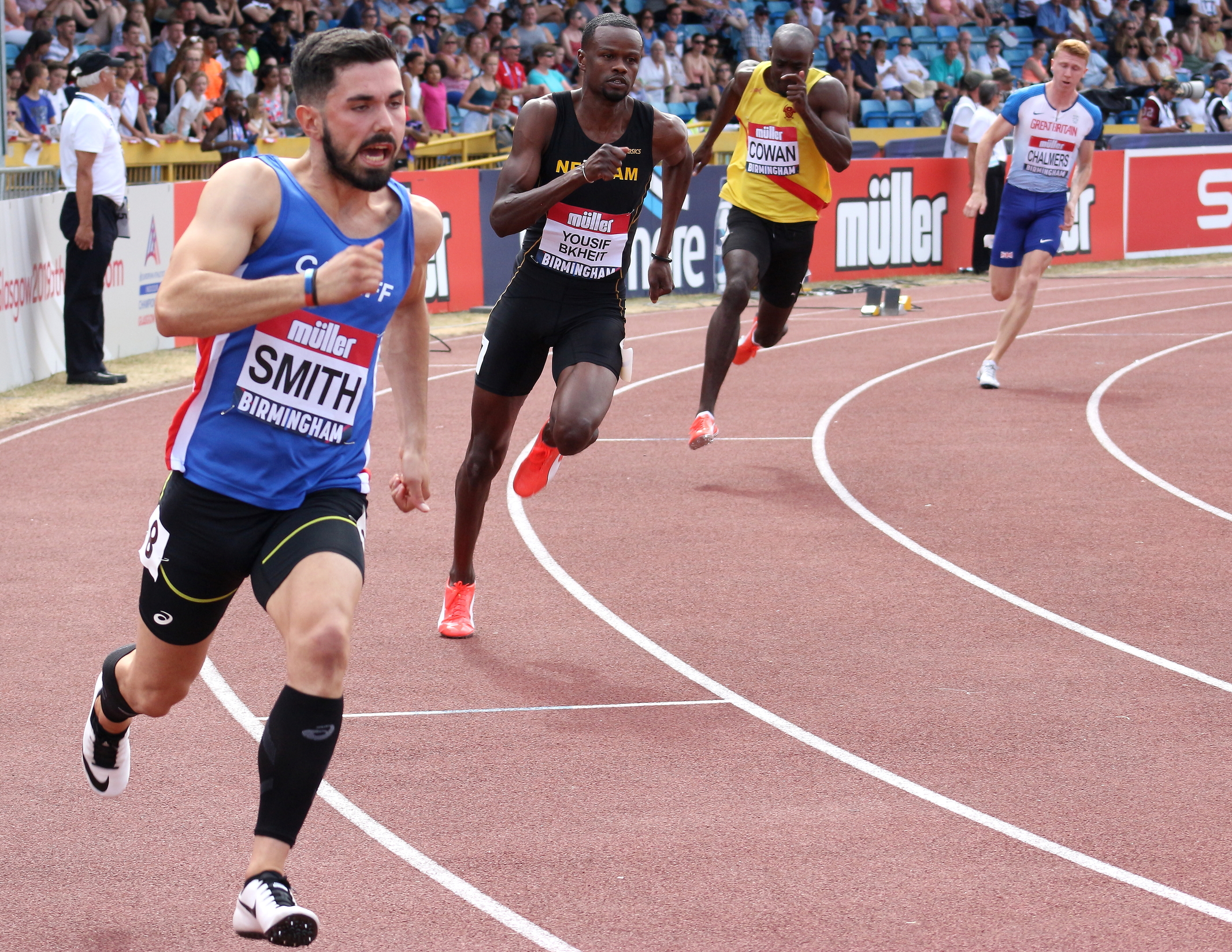 Owen Smith, in action at the British Championships, has his eyes set on the major meetings in the next few years. Pics: Owen Morgan

Welsh athletes are hoping to make it a St David’s Day to remember on the opening day of the European Indoor Championships in Glasgow.

First up on Friday morning will be Cardiff’s Owen Smith, who takes to the track in the opening round of the 400m at 10.20am, while Melissa Courtney will feature in the evening’s 3,000m final.

Flintshire-raised Smith said: “It’s an important day for Welsh people and for Wales in general, so to be able to actually race on the day, to be representing not just Wales but Great Britain, it gives it that extra special buzz.

“We’ve got two Welsh people going tomorrow with myself and Millie Courtney in the 3,000m final in the evening, so it could be a big day for the Welsh guys up here.”

Smith secured selection for the GB team by claiming a silver medal at the British Indoor Athletics Championships in Birmingham earlier this month.

The 24-year-old is in top form having set personal best times in the heat and final in Birmingham where he clocked 46.37.

All being well, Smith will also hope to be involved in Friday’s semi-final, which will take place at 8.55pm.

“The lane draws and everything are out and I’ve got quite a good heat, so I’m feeling pretty confident going into it,” he says.

“It’s obviously new for me to be competing at this level but it’s something I’ve strived to do pretty much my whole career so I just want to be able to take the opportunity and have fun while doing it.

“It’s going to be a case of trying to continue from the British Champs trying to keep rolling on from where I was back then. It’s been three weeks since I last raced so my body’s had time to recover.

“It’s feeling good so hopefully I can get down back towards where those times were, push on a bit and even go a little bit quicker if possible.

“The final is the target, obviously I’ll be taking each round as it comes. Each round I’m going to be treating as a final.

“None of the rounds are going to be easy, so it’s a case of needing to make smart decisions and run pretty quick each round to just make a place in that final.

“Once you’re in the final anything can happen. The hard part is getting there.”

Smith will have plenty of support at the Emirates Arena, having put out an appeal on twitter for spare tickets earlier in the week.

“I luckily managed to get hold of some tickets for my family,” he said. “My parents and my aunt are travelling up and they have tickets for all of the sessions.

“I’ll have my family in the crowd which is going to be nice as well as it being a home crowd, it always gives you that extra edge against the other countries.”

The Poole AC athlete faces a formidable challenge in the form of reigning champion Laura Muir who has set a Scottish indoor 800m record and bettered the British mile mark in recent weeks.

Also featuring in the high quality field will be another talented Scot Eilish McCoglan, along with talented German Konstanze Klosterhalfen, the fastest European over 3,000m so far this year.

However, Courtney herself is in outstanding form having smashed Hayley Tullett’s 17-year-old Welsh 3,000 metre indoor record and set a then world lead time in Germany at the start of the month.

Meanwhile, Smith will be hoping to be back on the track on Saturday evening for the final of the 400m which is scheduled to start at just after 8.20pm.

And on Sunday, he is due to be joined by his Matt Elias-coached training partner Joe Brier, of Swansea Harriers, in the 4x400m relay, which is due off at 8.25pm.

This will be Brier’s first senior vest having helped GB to 400m relay bronze at the World Junior Championships in Finland last year.

Smith and Brier are joined in Glasgow by a third member of former Wales and GB 400m star Elias’s training group. Cardiff-based Isle of Man athlete Joe Reid runs in the 800m.

Smith says: “It’s a pretty good training group, it’s a good environment. We’re all friends, we all hang round socially. To us, it’s not a forced environment. The training’s been going well, everyone’s been putting a shift in.

“It’s showing now that there are three guys from the group in the European Championships – two going individually and one in the relay.

“It’s a good starting block for what could be potentially a big couple of years for the group.

“As an athlete you want to reach the top of your sport. To be able to go to European Championships, World Championships and Olympics are what you target, but being a Welsh athlete there is always something special about being able to represent Wales on the big stage.

“For me the Commonwealth Games are just as important as representing Great Britain. For the next few years, there are going to be a few big competitions and I just need to carry on from where I’ve started 2019 and try to keep that going into the outdoor season and hopefully progress it on to 2020 which is World Indoor Championships and Olympics, which would be a very big year.”

The BBC has live coverage of the European championships from March 1-3 on BBC Two, BBC Sport app, Connected TV and BBC Sport website, as well as via BBC iPlayer.