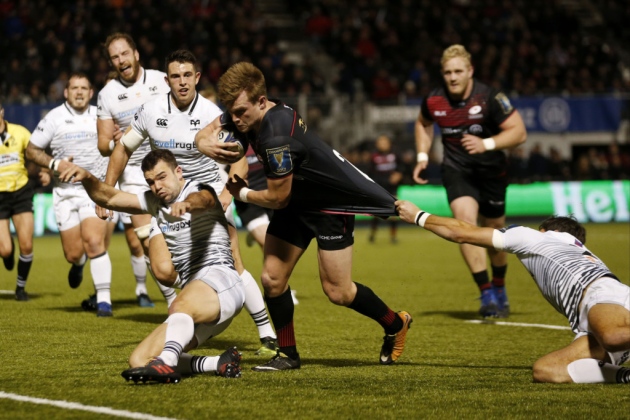 Nick Tompkins insists Wales will see the benefit of his move back to Saracens as he targets his ultimate dream of playing at a Rugby World Cup.

The 26-year-old made a fast start to test rugby after being a shock selection for Wayne Pivac’s 2020 Six Nation squad having previously represented England under 20s.

Following Saracens’ relegation to the Championship, Tompkins spent a year on loan at the Dragons before returning to his parent club last summer.

Tompkins believes being part of the Saracens environment can help take his game to the next level and with the Six Nations less than a month away he is adamant Wales will see the benefits of it.

“I loved living in Cardiff Bay, and it was a wonderful experience being able to immerse myself in the Welsh rugby culture for a year,” said Tompkins.

“I got to know the people and the places, and I hope they got to know more about me. But being able to come back to Saracens playing in the Premiership was unbelievably exciting.

“With the World Cup not far away it is important that I establish myself in the Saracens side and play well enough to stay there week in, week out. Playing well for my club is going to be the key to any success I might enjoy at international level.

“The Six Nations is going to be really exciting if I get the call. I can’t wait to see where Wales will be when they go in to defend their title.

“I came pretty late to international rugby. That was because it took me so long to break into the Saracens side.

“I guess I am a good example of someone who got there in the end through perseverance. I had to earn my spurs and I learned so much from being in the Saracens environment.

“If I had been thrown in much earlier maybe I wouldn’t have been ready for international rugby. I might have missed my opportunity.

“Now I’ve got a shot at a World Cup, and it is something I really would love to be a part of. It would be something I could look back on for the rest of my life.”

Tompkins has been mightily impressive for Saracens during the first half of the Gallagher Premiership season, starting 10 out 11 matches, while he has also averaged 74 minutes per match.

Saracens may have a star-studded squad that includes the likes of Billy and Mako Vunipola, Maro Itoje, Jamie George, and Owen Farrell but the 16 times capped Welsh centre is as important as anyone to Mark McCall’s side.

“I felt I had to prove myself all over again coming back to Saracens,” he said.

“There were a lot of familiar faces, especially among the coaching staff, but there were also a number of new guys. I initially felt like one of them.

Nick Tompkins is the cover star for this weekend’s programme 📚

📮 Order your copy straight to your door below 👇#StrongerTogether ⚫️🔴

“But while it took a while to learn about the cultures and tactics of a new team when I first got to the Dragons, there were no problems fitting right back in at Saracens. It was as though I’d never really been away from the club in many ways.

“Having never been out to another club before it was an experience that made me realise how fortunate I had been to spend such a long time at Saracens. I came back with renewed enthusiasm.

“When relegation was forced upon us, we had to look ourselves in the eye, be hard and say that things aren’t going to be the same again after what happened. Our collective goals and dreams haven’t changed, but we needed to discover what is going to make us tick moving forward,” he added.

“We are being honest with each other, and we are finding out who we now are. The aim is to reach the same heights as before and seeing so many players re-sign for the club has been huge.

“Seeing Mako and Billy Vunipola stick with us, along with Alex Lozowski, Alex Lewington, Andy Christie, and Alec Clarey has been huge. That is indicative of where we are and what we are looking to achieve.

“We are second in the Premiership and fighting as hard as we can on all fronts.”