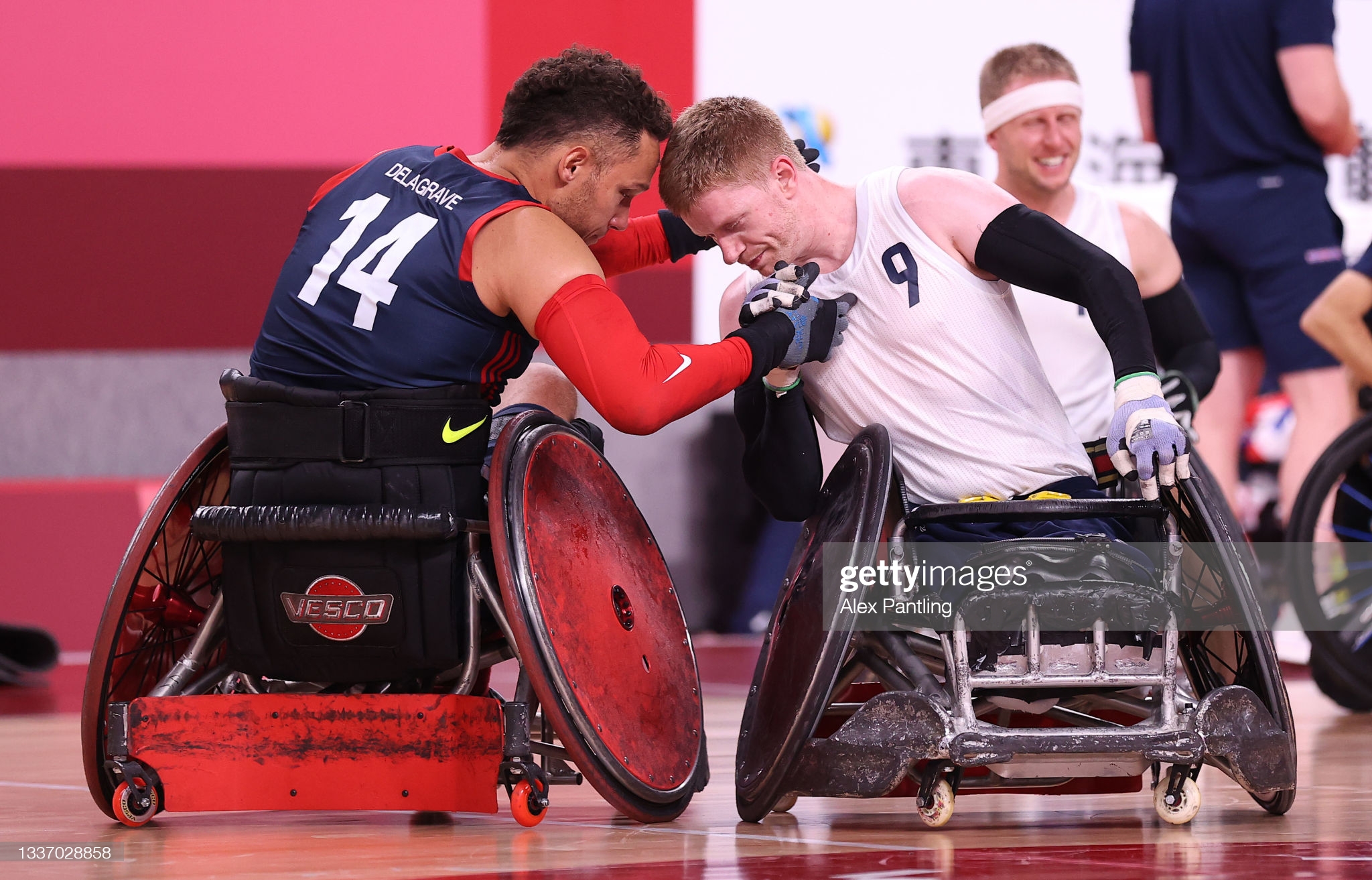 Gold medal-winning Welshman Jim Roberts insists he holds no grudges against those who cut funding for wheelchair rugby.

Roberts, from Welshpool, top scored with 24 tries to seal a memorable 54-49 victory over the USA at the Paralympic final in Tokyo on Sunday.

It was the first gold medal won by team GB in a Paralympic team sport since the Olympics and Paralympics became aligned under one organising committee 20 years ago.

But it also came after the decision by UK Sport to cut funding to wheelchair rugby after the failure to win a medal at Rio in 2016.

Roberts, 33, consistently performed at the Yoyogi National Stadium over the past five days and once again led the way in Sunday’s showpiece.

A bi-lateral amputee, he plays for London Wheelchair Rugby Club and made his full debut for GB in 2013.

On the lack of funding after Rio, Roberts said: “UK Sport funding is amazing. But although it was heartbreaking, I didn’t disagree with the funding cut.

“Why would you fund 12 athletes to win one medal when you could fund one swimmer who could win five medals? To me, it makes financial sense so I was annoyed but I didn’t disagree with it.

“I’m just glad that all of our sponsors and supporters back home were able to keep it going. We have an amazing chief executive, David Pond, who’s retiring.

“The amount of work that he put in to get the funding, to all the sponsors we’ve had along the way, they’ve ensured that we’ve had a programme that has been competitive and got us to tournaments, got us to camps, and paid for equipment.

“It’s not a cheap sport and it’s so good to see that all that hard work that everyone behind the scenes [put in] has paid off.”

Wheelchair rugby made its full debut as a medal event at Sydney 2000 after being a demonstration sport at the Atlanta Games four years earlier.

A milestone moment for the country in the mixed gender game came following previous bests of bronze-medal match defeats in 1996, 2004 and 2008.

Jointly captained by Chris Ryan and Gavin Walker, GB had guaranteed a place on the podium on Saturday courtesy of a 55-49 win over hosts Japan.

Against the Americans, Stuart Robinson and Aaron Phipps chipped in with 14 and 11 scores respectively to keep the scoreboard ticking over and ultimately ensure an unprecedented achievement.

“We knew there would be some amazing teams here,” explained Roberts. “The USA are a class act, and it was just amazing to meet them in the final.

“They always beat us in the major tournaments and it was nice to put a nail in that one.”

“Both of our 3.5s absolutely performed today. They took the load off my shoulders completely.

“Ryan Cowling had an absolutely phenomenal game. Jonny Coggan has been probably the best 0.5 in the world now, for the best part of 20 years probably, and it’s so nice to see him get some reward.

“I really enjoy the tactics of the game. You have to really slow it down, make it a thinking man’s game – that’s why USA are so good; they are one of the smartest teams.

“We knew they had a strong defence and our main goal was to try to stop them using that, because they would get turnovers against us using that.”

Captain Chris Ryan admitted the cuts in funding had made life difficult for the whole squad.

He said: “It was tough, I’m not going to lie. We had to cut back on a few things. We’ve got a brilliant team of staff around us, some work in formidable pay and they were brilliant throughout it all.

What a day for Jim Roberts from Welshpool.

He scored more than 100 tournament tries as he powered GB to a history-making gold in the wheelchair rugby 🥇@Jim__Roberts 👏#ParalympicsGB #ImpossibleToIgnore pic.twitter.com/kpZOWgJmOa

“Then we did get some funding back towards the cycle, and that just really helped us make that final push. The quality was always there. We managed to get through it and to win gold through the journey we’ve been through is just incredible.

“In some ways, it made us grow. We grew as a team, grew as players, grew as staff, and we realised what we had to do to work. It’s not all about money, performing well at sport, but my god, it helps.”