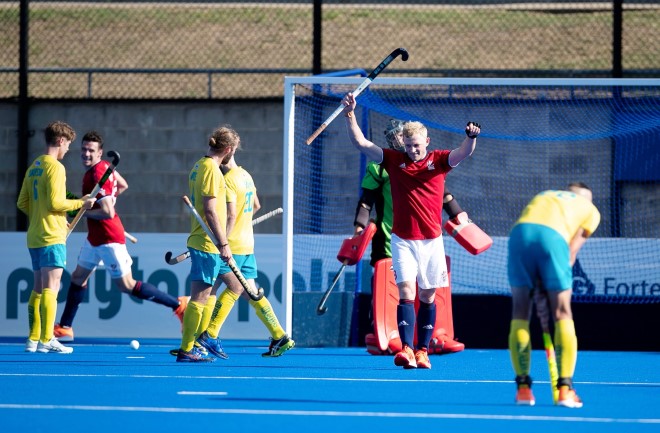 Wales hockey ace Rupert Shipperley has been offered a full-time place in Great Britain’s men’s programme in the lead-up to this summer’s Tokyo Olympics.

The Hampstead & Westminster player had been training with the team in the latter part of 2019 before being called up to the squad for the first time, featuring in all four FIH Hockey Pro League games against Australia and New Zealand last month.

Shipperley scored on his debut against the Kookaburras and impressed to the extent that Danny Kerry and his coaching team have decided to bring him into the fold ahead of a crucial six months.

He is the fourth Welsh player in the programme based at Bisham Abbey for the next round of the FIH Hockey Pro League games and the Tokyo 2020 Olympics.

Shipperley joins Jacob Draper in the men’s team and Sarah Jones and Leah Wilkinson in the women’s.

Delighted Shipperley, a former teacher, said: “Originally Danny said he’d speak to me when we got back from the tour so I knew there was a decision coming – whether it would be a good one or not I wasn’t sure.

“But I felt like I played well out in Australia and New Zealand so I was fairly confident. I was relieved and happy when I got the call!

“That was my trial. I felt like I trained and played well out there. It’s obviously one of those subjective decisions but luckily I was on the right side of it.

“I was a little bit nervous, it was a bit like getting my first cap for Wales. It reminded me of those emotions. Scoring on debut is always nice – I was absolutely shattered at the time though, hence the celebration where I just stood still!”

Kerry said of the call-up: “I am delighted for Rupert in his selection to this GB squad. We have been tracking him for some time in his play for club, with Wales and then through an extended period of assessment within the GB programme.

“Rupert brings good game intelligence, a fantastic work ethic and athleticism and a competitive edge on the pitch.

“His inclusion further increases the depth in our squad as we prepare for the FIH Hockey Pro League and Tokyo Olympic Games and we look forward to working with Rupert.”

Shipperley will be next hoping to be in action for GB’s men in their FIH Hockey Pro League games away to The Netherlands on 28-29 April before the league returns to London on 2-3 May when the men face India and the women take on China.

That is the first of four big double header weekends taking place in London this year, with GB Hockey returning to Harlequins’ Twickenham Stoop to take on Argentina on 16-17 May.

For the May Bank Holiday, the men face Spain and the women play USA at Lee Valley Hockey and Tennis Centre on 24-25 May, while the double header against Germany on 13-14 June will be the final chance to see the teams play before they head to the Olympics.