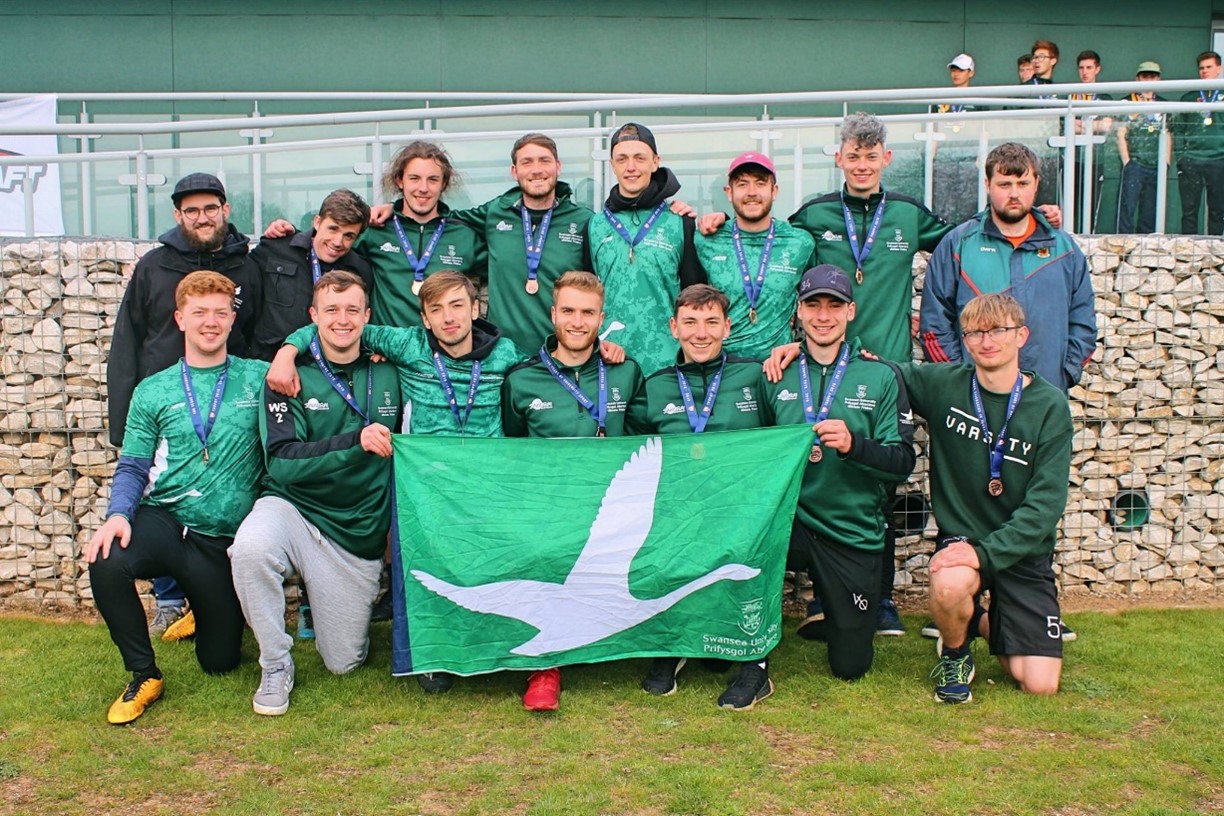 The first image that pops into your head when you think of the word “frisbee” is probably a family or bunch of mates chucking a plastic disc around at the beach.

With the barbeque smoking and sun shining in the background, those familiar with frisbee usually see it as nothing more than a bit of fun to pass the time.

There is, though, another world of the plastic disc. A hard core, competitive world.

Ultimate Frisbee is a fast-growing sport that has all the intensity and highlight plays you would expect from a serious team sport.

Comparing this to a summer beach session is like believing kids at a skate park are Olympic BMX racers.

“It’s annoying. It’s not seen as a real sport or one that people even know can be intense and competitive, the way I love it.”

Swansea University student Ryan Kapma agrees. “A lot of people are closed-minded to it.” he says. “They think, ‘this surely isn’t a sport’.

This is the perception that Ultimate Frisbee players like 21-year-old Ryan and 23-year-old Joe deal with each time they discuss the sport with newcomers.

Both players began playing in secondary school and have carried on playing at university and club level. This makes them both highly experienced for their age, as most players discover the sport at university.

Since joining the Swansea and Cardiff University teams, they have contributed to progressing the teams into qualifying for the national competitions on a regular basis.

There’s something else that sets Ultimate Frisbee apart from other sports. It’s played by nice guys. Or, at least they attempt to avoid the ugliness often found elsewhere.

Ryan calls it, “a game of integrity that ‘seems to attract nice people.”

Progressive elements, such as self-officiating and mixed-gender competition attracts athletes looking for an alternative to more traditional team sports.

After having lots of conversations explaining how Ultimate works, many within the community have simplified the premise into being “a hybrid of netball and American Football.”

Players work together to move the disc up the pitch towards the end zone. To score a point, a  teammate must catch the disc in the opposition’s end zone.

But players are not allowed to move with the disc and if a team loses control of the disc at any point, the opposition will gain possession.

Games can be played indoors, outdoors, or on the beach with each format having separate regulations to follow.

However, the rules are just the beginning of understanding this niche sport. Ultimate is stacked with conventions that build a unique ethos when compared to other competitions.

These values have helped Ultimate grow into an international entity that is eager to break into the mainstream.

Whilst the UK has been amongst the highest performers in the global game, individual British players and clubs face restrictions. This has meant they have fallen behind the top-ranked countries like Japan and the USA.

Kapma’s own experience in the sport is a mix of passion . . . and frustration.

He began playing at secondary school in Warwick, “by mistake” he says, when he was tricked into going along to a training session by a mate.

But he soon discovered the quick skill progression and instant gratification of getting to play at a national tournament hooked him in.

Throughout the years, his progression continued. He moved on to national club and university competitions and has since played for a variety of clubs based across the UK.

He was attracted by the quality of the teams in the south-west of England and reckons his greatest achievement was being selected for Devon’s highly-rated nationals squad. The squad qualified for the European Championships but were unable to attend due to Covid restrictions.

Whilst he has played at a high level, the Swansea masters student says his top priority is to reach a World Championships. With this goal in mind, he created an Instagram page titled ‘kaps_road_2_worlds’ as “a place where I can visualise what I’m doing.”

Though this objective is more realistic within Ultimate compared to other sports, Kapma is concerned about the level of commitment needed to get to the biggest stage.

The sport’s lack of exposure has left the UK scene “a shambles”, he says with “only two to three elite teams in the country.” It means players looking to compete at the highest level use up a lot of their time and money to do so.

As a Swansea student living in the Midlands, his trips to Devon for training take two more hours or more from both locations. Not only that but his university and club teams have to pay for their own travel, accommodation, and registration fees.

With the top teams like Devon and Clapham attracting the best talent, it leaves a big gap in quality between them and other clubs across the UK.

This becomes very apparent when looking at the differences between clubs in England, Scotland, and Wales.

England would be expected to have a strong club presence, but Scottish club Alba perform at the highest level, too, recently claiming a spot at the 2022 Club World Championships.

Wales, on the other hand, lags behind. The current club scene is “appalling”, says Kapma.

South Wales Storm are the only active club within Wales. Based in Cardiff, the club are looking to improve Welsh Ultimate by developing players of all abilities.

But there’s a long road ahead.

Penning – who combines coaching with his studies in Swansea – is using his knowledge of the sport to “build a solid cohort of players in the south Wales area.”  By creating this larger group of players, it will allow the club to have both an experienced and developmental squad.

Originally from Devon, he started playing in secondary school.

“It was seen as quite a cool sport,” he says.  “It was new and interesting.”

That was 10 years ago. He’s been playing non-stop since.

His own achievements include topping the league as captain of Cardiff University Ultimate and finishing third at Division Two Indoor University Nationals.

Alongside playing, he has coached for the past four years at both club and university level. He now has high hopes for his latest role as club coach for South Wales Storm.

Though he is currently focussing on developing a “core roster” of players not wanting to travel outside of Wales but still seeking to play at a competitive level, he has another big ambition.

In the hands of coaches like Penning, South Wales Storm, and Welsh Ultimate in general, look to be heading in the right direction. But what else can be done to improve the state of Ultimate Frisbee in Wales?

“There needs to be a push in terms of competition,” says Penning. “We need to get the sport on TV, get it into the Olympics.”

If Ultimate Frisbee goes down that road, the belief is that high quality, motivated athletes from other sports might give it a try.

“The community should be doing more to change the perspective of Ultimate to make people know it can be intense and competitive, so we can someday achieve higher levels of game play and attract more athletes.”

This ambition is shared by the rest of the Ultimate Frisbee community, with UK Ultimate and the World Flying Disc Federation (WFDF, known as ‘WoofDuff’) devising plans to increase the popularity of the sport.

“The sport has given us a sense of comfort and peace. Not too many people in India know about frisbee, just like they don’t care about us.”

Read this incredible story from @AJEnglish about the growth of Ultimate in India’s Assam.https://t.co/8uh9akgU0a

UK Ultimate has taken inspiration from USA Ultimate to develop a more professional approach. Already, some games are being live streamed on a regular basis, pushing team brands.

In addition, Ultimate Frisbee has been introduced to the school curriculum, in some parts of Wales and England, encouraging more schools to set up junior clubs.

As a player who started at school, Kapma believes introducing the sport to younger people is a good idea. “It teaches them the ethos of the sport.”

On a global scale, WFDF have been bidding to get Ultimate Frisbee into the Olympics. This would provide a massive boost to the sport by placing it on a stage viewed by millions worldwide.

Although the sport has been recognised by the International Olympic Committee, the bids to make the Games have yet to be successful.

However, the 2028 Games in Los Angeles provide the best chance yet due to Ultimate Frisbee’s American background.

Ultimate Frisbee Dog | Brodie Smith https://t.co/HO6tXEWJyR via @YouTube do a Brodie with your pup not Pelosi!

Those plans form part of a long term strategy for a continued progression of Ultimate Frisbee across the globe.

In essence, Ultimate remains a niche sport. But it is full of passionate, committed players like Kapma and Penning.

They, and many others, are eager to see the sport they love progress into a competitive powerhouse like football or rugby.

Next time you’re in the park and see that orange disc sailing through the air, then remember: there’s a whole other world out there called Ultimate Frisbee.