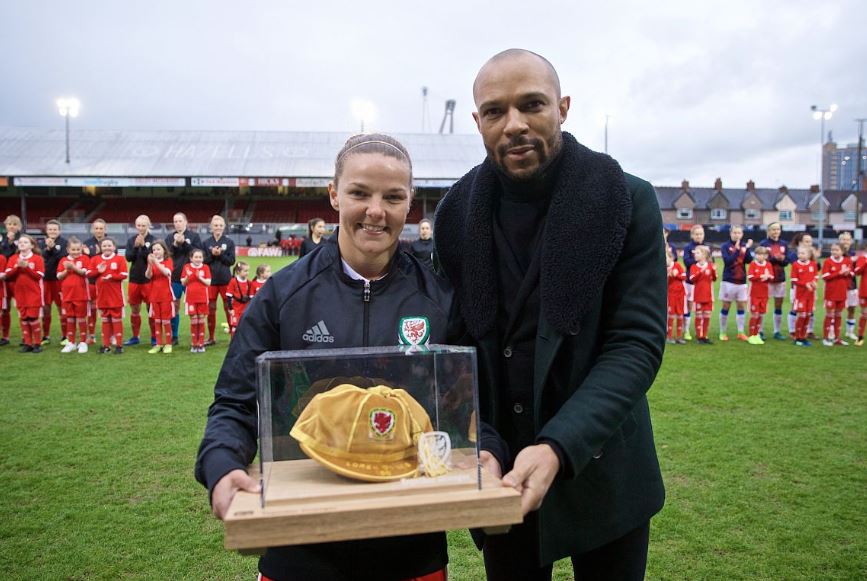 Loren Dykes, here presented with her 100th cap by Danny Gabbidon, will assist in next week's training camp following her retirement. Pic: FAW.

Wales women will begin life without head coach Jayne Ludlow at a training camp next week.

The 26-strong squad will begin preparations at the Vale Resort in Hensol for the 2023 FIFA Women’s World Cup Qualifying campaign.

The near full-strength squad will be led by an interim coaching group following Ludlow’s decision to recently step down as head coach.

FAW Technical Director David Adams will take charge of the squad as the recruitment process for a new manager progresses.

“I’m very excited to be involved for this camp along with the rest of the coaching team.

“We plan to keep it an elite and enjoyable environment for the players, working on targets for each individual as they start to look ahead to the upcoming world cup campaign.”

Adams will be assisted by Cymru Men’s U18s manager Matty Jones and  defender Loren Dykes who retired from playing earlier this week.

“I’m privileged to be asked to work with these girls on the upcoming camp, they are such a talented group of players with a good mix of youth and experience,” said Dykes.

“It’s a great learning opportunity for me and I hope I can make a positive impact in the short time we have together.”

The only player unavailable is Megan Wynne, who is at the final stages of her recovery from an ACL injury.

The Women’s World Cup qualifying campaign is due to start in September with the draw made on 30 April, while Wales will have friendly games beforehand.