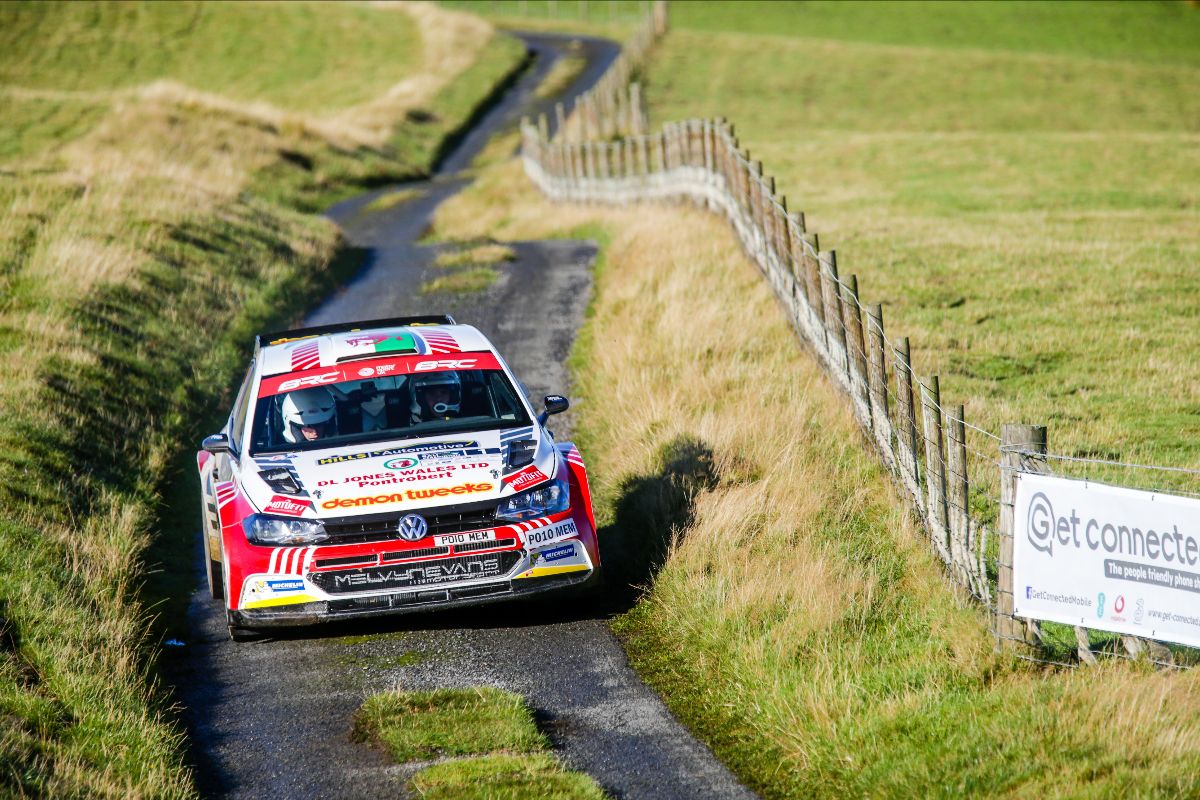 Machynlleth’s Osian Pryce ensured his quest for a maiden Motorsport UK British Rally Championship title remains firmly on track, by taking maximum points at the fifth round of the series, the Get Connected Rali Ceredigion.

Pryce and co-driver Noel O’Sullivan returned a scintillating drive in their Michelin-shod Volkswagen Polo GTi across each one of the event’s twelve daunting stages in the Welsh hills around Aberystwyth  to seal their third BRC victory of the season.

“I`m over the moon with that one,” said Pryce.

“There is a number of people that could have taken the win this weekend to be honest but I`m really impressed with how everything has gone, I`m super happy with the car.”

Based in Aberystwyth on the Welsh coastline, the British Rally Championship was visiting the Get Connected Rali Ceredigion for the first time.

The Ceredigion lanes attracted thousands of fans to watch the action of the event’s challenging 85 miles.

And a truly international feel to the event added a buzz to proceedings over the two days of competitive driving.

The event blasted into action across the promenade of the seaside town on Saturday with two tricky super-special stages to entertain the fans who had packed the streets to enjoy the star-studded entry list.

Pryce would find himself second to Keith Cronin and co-driver Mikie Galvin in their similar Pirelli-backed Polo GTi but only by 1.5 seconds. However, the following stages under the cover of darkness would prove pivotal in the event’s result; and Cronin’s title hopes.

The first closed-road moorland test would see Cronin extend his lead to over six seconds over Williams who vaulted Pryce into second. That deficit came largely thanks to boost issues in the Melvyn Evans Motorsport run Polo and the local ace would emerge third, just half a second ahead of teammate Merion Evans.

But the final test of the leg, the aptly named Devil’s Bridge would see Cronin uncharacteristically leave the road after going light over a crest less than a mile into the stage and suffer a sizeable roll. Ceredigion was an important event for Cronin’s points tally and now the four-time champion is left pondering his next move.

Newcastle Emlyn’s Williams led overnight but just 2.6 seconds separated the podium places with Evans and Jonathan Jackson hot on Pryce’s heels. When Sunday came, so did the rain and Pryce played a blinder.

Opting for slicks whilst those around him bolted on the wets, he capitalised on the quickly drying roads throughout the 17-mile Llanfihangel test, moving into the BRC lead by almost 30 seconds. That mammoth stage also saw Evans break the steering in his Polo GTi and Jason Pritchard roll out of the event. But there were no such issues for the man out front.

Despite being tempted to fight with World Rally Championship regular Hayden Paddon for outright victory, Pryce continued to punch in the times with aplomb, leading from the opening stage on Sunday morning to the last, securing an important win for his elusive BRC title chase.

“You only have to look at the calibre of the guys who haven’t made it to the end, it’s clearly no mean feat to finish this rally and with a car that’s pretty much unmarked,” added Pryce.

“It’s been a pretty special weekend. A huge thanks to all my supporters who have got me here, there is not just the small matter of finding the budget for the next one.”

The British Rally Championship heads back to the forests in just a few weeks’ time as Trackrod Rally Yorkshire plays host to the sixth round of the series at the end of September.