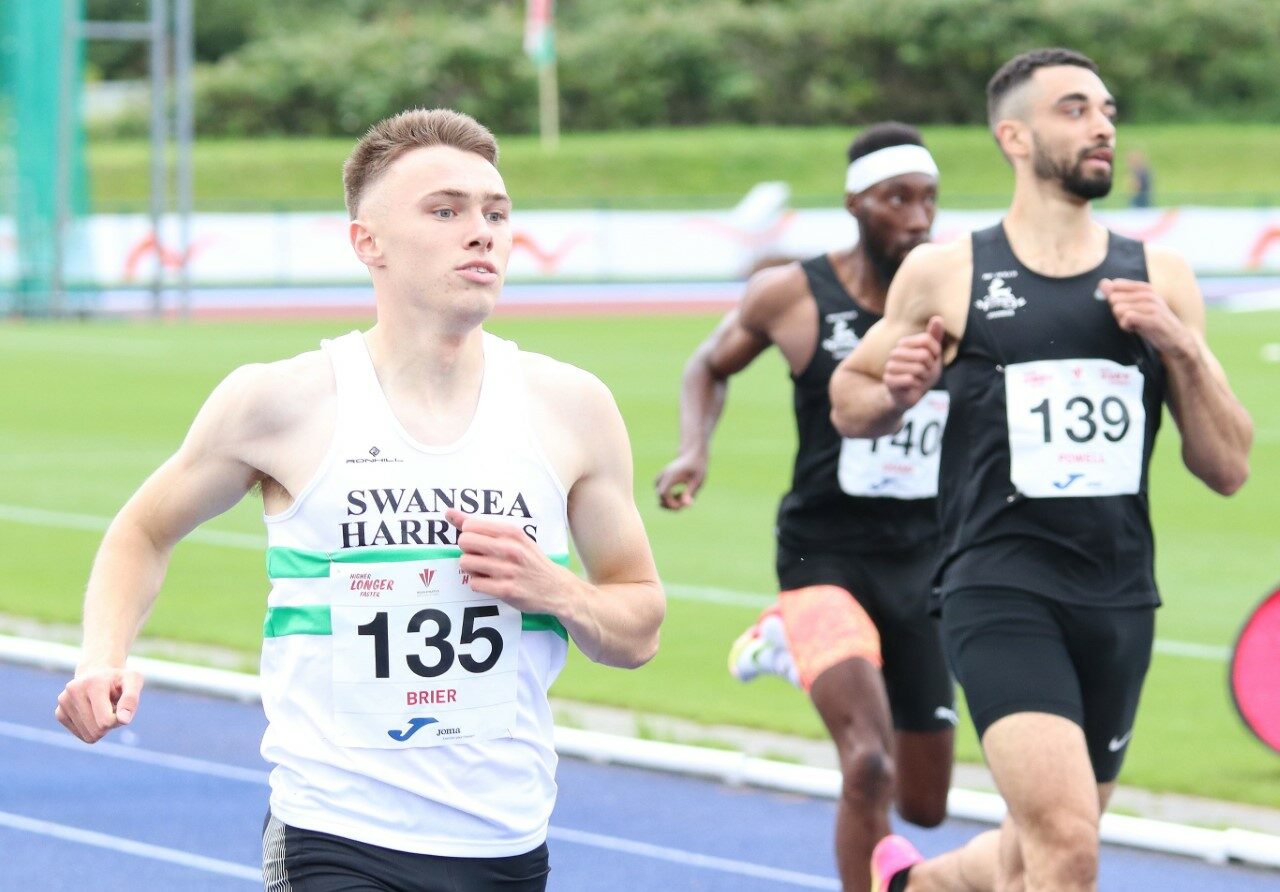 Joe Brier in action at the 2021 Welsh Championships.

Two of Wales’ most talented young sprinters want more of life in the fast lane after competing at major championships this summer.

Joe Brier’s experiences at the Tokyo Olympics and Jeremiah’s Azu’s European Under-23 gold medal winning performance in Estonia have whetted the appetite for even more success on the world stage next summer.

And what a sizzling summer it promises to be with Commonwealth Games, World Athletics Championships and European Championships all taking place within the space of a few short weeks.

For Brier, the experiences off the track in Tokyo were just as valuable as those he gained on it.

Being around world class athletes day to day proved to be both educational and inspirational, who returned from Tokyo to win the Welsh 200m title last month.

The Swansea Harrier was fortunate to be one of the few people in the stadium when 400m hurdles sensation Karsten Warholm produced one of the most enduring highlights of the games.

None other than Olympic 400m legend Michael Johnson described Warholm’s obliteration of his own world record as “one of the most impressive performances in the history of the sport”.

And the 20-year-old from Neath was trackside to witness the Norwegian break the tape in a barely credible 45.94 seconds.

“That was the highlight of the games,” said Brier, smiling broadly at the memory. “There were only about 20 of us in the stadium. There was me, the other four by four boys, a few other guys from Norway and a couple of guys from Ireland.

“We tried to make as much noise as possible for him. After the race he came over and said ‘cheers guys for coming down to support’. It was a really nice gesture from him.

“It was an unbelievable run. I didn’t think it was humanly possible for a man to go under 46 seconds over the hurdles.”

Brier says he has taken inspiration from Warholm’s performance. “It was pretty special to see. And it’s made me hungry for more. I can’t wait to fully reach my potential.”

Olympian – thanks for all the love and support over the past few weeks💫🇬🇧🇯🇵 pic.twitter.com/XbCL5VNftA

The Cardiff Metropolitan University student says the whole Olympic experience was invaluable, especially as the Tokyo games weren’t necessarily on his radar at the beginning of a season which saw him lower his personal best from 46.38 to 45.84.

“My goal has always been Paris 2024,” admitted Brier. “This Olympics probably didn’t actually nail itself on my schedule until I raced in Belgium at the end of May where I ran 45 seconds twice.

“So that’s when I really thought I actually have a good chance to get to the Olympics.”

Even then, a disappointing performance at the Great Britain trials meant Brier missed out on initial selection for Tokyo.

The 20-year-old was subsequently selected as a travelling reserve and was only promoted to the actually relay squad when team-mate Matthew Hudson-Smith was forced to withdraw.

However, despite not being in the original selection, when Great Britain lined up for their heat in Tokyo, Brier was one of the four who took to the track.

“When I ended up getting selected it was a bit of a surprise selection for myself. But I’ll take every experience I get at the moment. I really enjoyed it and now we move on towards Paris.”

Although the GB team exited the competition in the heats, Brier thoroughly enjoyed the whole Olympic experience.

“It was surreal. It was everything I expected and more. It was a bit of shame, obviously, with no crowds, but I still feel like I had the full experience.

“Just sitting in the food hall with some of the biggest names in the sport at the moment, such as Fred Kerley and Marcell Jacobs. It was good to be around some of those names in that environment. Just to see how they go about their day.

“The main thing is managing yourself in that environment. This was the first holding camp I’ve been to, so it’s about applying yourself to training properly.

“It’s nothing like any of the junior competitions I’ve been to where you’re on the flight the day before the competition and then you go home.

“At the Olympics, you’re there for a month so it’s about managing yourself, cracking on with training and listening. You have a job to do while you’re there.”

All the knowledge gained in Tokyo will prove invaluable not only for his bid to reach Paris, but also next year when athletics will experience a summer like no other.

Despite the tight schedule, Brier hopes to qualify all three championships, but for the fluent Welsh speaker, the Commonwealth Games are a particular target.

“When you’re in the final, anything can happen, so hopefully I can bring a medal home as well. So I’m really looking forward to the next year.

“It’s a huge year. Hopefully I’ll get the opportunity to do all three championships. They’re one after the other, it starts off with Commonwealth Games, World Champs and then Europeans, so hopefully I can bounce from one champs to the other and run really well.”

Had Brier not been a late call up for the Olympics, he would have been competing alongside Azu at the European Under-23 Championships in Tallinn, where the current Welsh 100m champion was in outstanding gold medal- winning form.

In the heats, the Cardiff athlete clocked a sensational new PB of 10.19 – the second fastest 100m of all time by a Welshman and the quickest run this summer.

The final saw him leave the rest of the field in his wake – allowing him the luxury of a celebration 10 metres from the finishing line.

That celebration was particularly poignant as the win provided redemption for Azu after he had European Under-20 gold snatched from his grasp by injury two years ago.

On that occasion, the then 18-year-old was just yards from victory in the 100m final when he pulled up sharply, clutching his hamstring.

This summer’s victory put to bed the “unfinished business” Azu felt he had with European Championships.

“At the under 20s two years ago, I was 18 at the time,” said Azu. “It doesn’t sound like a long time, only two years, but you learn a lot about yourself in just a year.

“So I had two years to learn about myself, I had a different mindset going into the champs.

“To go back there and get what was mine – I don’t like saying that, but that’s how I felt about it. I felt like that it was mine. Unfortunately, I was robbed of it. No one’s fault. It’s just track and field, isn’t it?

“But thank God for getting me through it fit and healthy, I’m here and still running well. ”

Like his fellow Welsh sprinter, Azu feels the whole championships experience was invaluable, even though COVID-19 restrictions meant the event threw up some unique challenges.

However, Azu who never seems to have a smile far from his face, used the unfamiliar circumstances to his benefit.

“It was good experience, but a bit weird,” he said. “Although that really allowed me to get in the zone because we weren’t allowed to leave the hotel.

“That allowed me to focus on the task at hand. And I think I learned a lot about myself at that champs. Things like how much of a competitor I am.

“When it really matters, I know I can bring my A-game. And I showed that. And ever since then I’ve been running times near the fastest I’ve ever run.”

Indeed he has, last month Azu realised his burning ambition to become Welsh 100m champion as he wrestled the title from fellow Cardiff athlete Sam Gordon, clocking 10.31 in the final.

Having shown he can deliver at championships at home and abroad, like Brier, Azu has got a taste for the big time and wants more.

“I really enjoyed it,” said Azu of the European Under-23s. “It’s always nice to be running against the best in Europe and the best in the world. So every opportunity I get to do that I’m going to take.”

Azu is also particularly keen on wearing the Welsh vest at the Commonwealth Games next summer.

Having already achieved the individual nomination standard, he is also desperate for the Welsh 4x100m to qualify for Birmingham.

The day before winning the Welsh title he ran the final leg as the national relay team enjoyed victory over England and Scotland in 39.43.

In July, he was part of a Welsh quartet which ran the fastest time by a Welsh team outside of a Commonwealth Games when they clocked 39.36 at the Wanda Diamond League meeting in Gateshead.

With Azu, Gordon, Josh Brown, Dewi Hammond and Daniel Beadsley all having clocked new PBs of 10.36 or under this season and several others all in fine form, Welsh sprinting has rarely enjoyed such strength in depth and success.

And the youngster is revelling in the whole environment, his sheer love of the sport always shining through that trademark smile.

“It’s been a long year,” admits Azu. “But I’ve enjoyed every single minute, even when it wasn’t going well. I just kept the faith, I knew that I just had to be patient and it’s shown in my running.

“I’m loving it. I’m looking forward to next year. I’ve got to go into winter again, get all of that hard work in. I always look forward to it, as painful as it is, I enjoy it! It’s what I do. I love athletics.”

And next year there will be plenty of athletics to love for the two young Welsh sprinters who thrived on life in the fast lane during the summer of 2021.