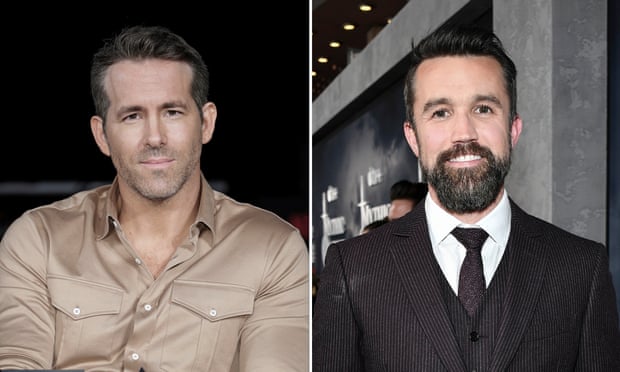 Ryan Reynolds and Rob McElhenney are new owners of Wrexham

Wrexham fans today began voting on a future that could see the club back in the Football League as a global force and starring in a Netflix documentary of their rise.

That’s the enticing vision presented to them by Hollywood actors Ryan Reynolds and Rob McElhenney who want to invest in the National League outfit.

The duo moved a step closer to owning Wrexham after making a positive impression during a lengthy virtual meeting where they put on a presentation before they answered questions for fans.

Deadpool star Reynolds and McElhenney, known for his role in It’s Always Sunny in Philadelphia, vowed to protect the heritage of the club while trying to return it to former glories.

We've been asked to share this mission statement, which can be found here 👉 https://t.co/nLPfzj64LO

Reynolds, who has just sold his American Gin brand to drinks giants Diageo for a reported £460million, said: “We want to be at the Racecourse Ground as much as possible – as many games as I can make.

“We want to have a pint with the fans. You’ll be fed up of us! We want to be great ambassadors for the club, to introduce the club to the world and be a global force.”

McElhenney added: “The Racecourse hasn’t been full for a while. I have a vision of the Racecourse being full again. I’ve seen how packed it used to be in ’77 – I’ve been watching a lot of films about that and I want it to feel like that again.

“We want to pack that stadium again. Ryan is much more responsible in his business life, but I get so excited by possibilities and what it could be. I want people to be so excited to watch the rise of the club and the Racecourse.”

Members of the Wrexham Supports Trust, which own the club after taking over in 2011, voted 95 per cent in favour of listening to the Hollywood duo’s plans.

Didnt tweet last night as too much exciting stuff was going on. Firstly @RMcElhenney & @VancityReynolds outlining their vision for @Wrexham_AFC their pronounciation of 'Wrexham' was solid too rather than the expected 'Wrex-Ham' 👍👍! They said lots of other good stuff too

Voting started today and run until 15 November, with a vote of 75 per cent in favour needed for the resolution to be approved.

Wrexham would then star in a Netflix documentary if the take-over gets the go-ahead.

“The community must be more included. We must build a supporters’ board and there will be full transparency. We’re not doing it to make money.

“We have successful day jobs, we feel we can grow something and we can only do that by knowing we have support of community.”

And in their mission statement the duo also admitted one of the goals would be to always beat Chester – if the two close rivals ever play each other again.