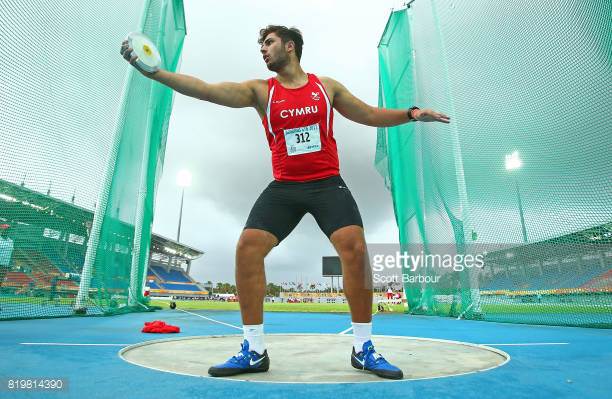 Wales and Great Britain discus international James Tomlinson clinched automatic selection for next month’s European Under-20 Championships in Sweden at Bedford on Sunday.

The Pembrokeshire athlete took gold at the England Athletics Under-20/U-23 Championships and European trials with a throw of 56.93m to retain his title.

Having already gained the qualification standard of 57.50 a number of times this season, the win gives Tomlinson automatic selection to the Great Britain team for the European Championships which start in the Swedish city of Boras on July 18.

After his latest victory Tomlinson said: “It feels great. Obviously I wanted a little bit more distance, but everyone says that.

“But in terms of moving forward, I’ve got the Europeans coming up now, my tickets are in the bag and it all matters then really, doesn’t it?”

Azu had hoped to add 200m qualification on Sunday, however he pulled out of the event after feeling hamstring pain while winning the 100m.

Former European Youth and Junior European 1500m Champion Jake Heyward had hoped to gain an automatic selection spot for the European Under-23 Championships, starting in Gavle, Sweden, on July 11, in Sunday’s 1500m final.

However, the Cardiff Athletics man’s spring and early summer has been hampered by injury and the Bedford Championship was his first outdoor track outing of the year.

Heyward won his heat on Saturday in a time of 3:53.25 and he took early control of Sunday’s final going straight to the front of the field from the gun.

The youngster led the way right up until the final bend when Piers Copeland took the lead entering the final straight and held on to take the win, with Heyward winning a hard-earned silver medal in 3:51.21.

With automatic selection places to the Under-23 only going to this weekend’s championship winners who have achieved the qualification standards, Heyward must now wait for the decision of GB selectors when the team is announced on Wednesday.

A maximum of three athletes will be selected in each event, with up to eight athletes being chosen for each relay event.

Under-20 athletes who haven’t yet gained the qualifying mark for the Under-20 championships have until July 7 to do so. The first round of selections for the under-20 team will be made on Monday, with the remainder being decided on July 8.

There were a number of other excellent performances from Welsh athletes during the second day of the championships, including Swansea Harrier Lauren Williams winning silver in the under-23 400m hurdles in a time of 59.13.

Cornwall AC’s Patrick Swan won a bronze medal in the under-23 shot put with an effort of 15.96m and there was also a third place in the Under-23 javelin for Birchfield Harrier Bethan Rees, who registered a season’s best throw of 49.47.

Seasons best of 49.47m at the England athletics U23 &U20 championships and European trials today! Almost as tall as Mark Roberson (with some help from the podium) 😊 pic.twitter.com/hXU5gXbIGs

In the under-23 400m final, Swansea Harrier Joe Brier narrowly missed out on a medal by finishing fourth, but he enjoyed the consolation of lowering his personal best for the third time this season as he threw himself over the line to clock 46.66.

Full results of the two days of competition at Bedford can be found of the England Athletics website.