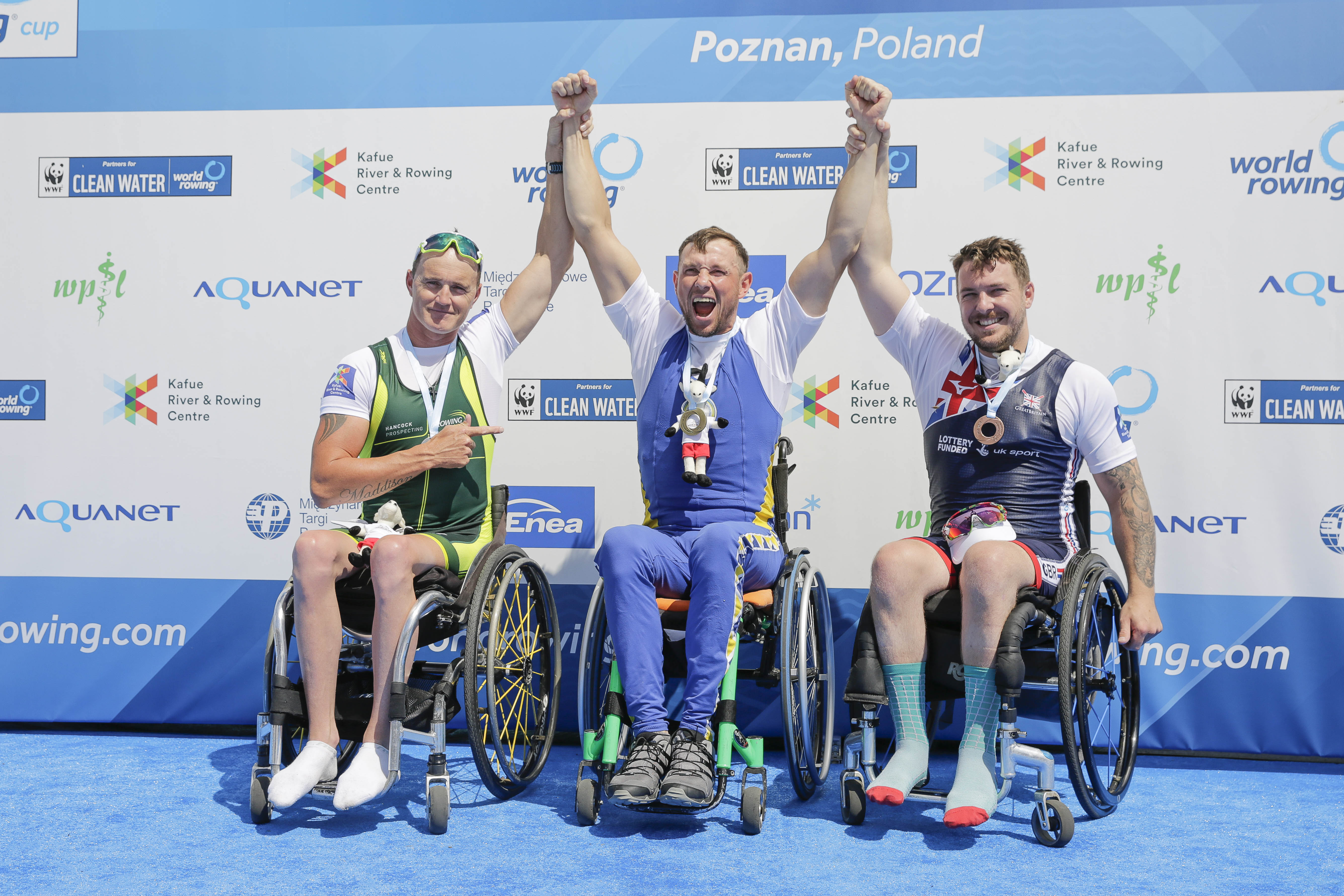 Ben Pritchard has paid tribute to his Great Britain rival Andy Houghton after beating him to a bronze medal at the second World Rowing Cup regatta in Poland.

The Welsh para-rower finished third in Poznan – one place ahead of Houghton in the PR1 single – to continue his rapid rise through the sport.

Former triathlete Pritchard, from Swansea, had beaten Houghton to a medal when he took bronze in Italy earlier this month and he repeated the trick in Poland.

It’s becoming a case of the master now being overtaken by his apprentice as Pritchard was quick to acknowledge the role Houghton played when the Disability Sport Wales Emerging Athlete of the Year nominee first made the switch to para-rowing two years ago after an accident on his bike.

“He’s given me loads of advice. Without him being so supportive, I’d have packed it up last year,” said Pritchard, who rows the boat formerly used by 2008 Paralympic champion Tom Aggar.

“I feel for Andy as well because we’re good friends as well as team-mates.

“This is my first World Cup… and it’s set a very high standard for hopefully my long rowing career.”

Pritchard finished behind Ukraine’s Roman Polianskyi and Erik Horrie of Australia in the PR1 M1x event.

Thornley, who contested the B Final at the European Championships, said: “This weekend has definitely been a step in the right direction after the Europeans.

“ My coach and I had a clear plan of what we wanted to do and this shows I’ve definitely moved on.

“The margin today was a bit tough to take but finishing fifth after not even making the final in the Europeans means I’m definitely going in the right direction.”

Having narrowly missing out on a podium spot at the European Championships in Lucerne, some sensational racing from Graeme Thomas and John Collins saw them move from fifth place just before the 1,000m mark to take the lead in the final 500m.

They were narrowly beaten to the line by less than two tenths of a second by Barnabe Delarze and Roman Roeoesli of Switzerland, finishing with the silver medal.

In the single sculls, Tom Barras just missed out on the podium finishing fourth while Beccy Girling was part of a women’s four that finished sixth.

Following the race, Preston-born Welsh rower Thomas said: “We’re really pleased with that race – progress is always a good thing. Getting on the podium today gives us renewed confidence that the things we’re doing in training really are working and we are stepping forwards.”

The third and final World Rowing Cup will take place in Rotterdam, the Netherlands from 12-14 July.

British Rowing Director of Performance Brendan Purcell said: “This has been a strong weekend in that we now have much more information about where we are in comparison to the rest of the world.

“We went into the weekend aiming for 11 boats to reach the position needed to qualify for the Olympics at this year’s World Championships and we had nine boats in that position.

“Some of our medal-winning boats from the European Championships stepped up and delivered more strong performances, others didn’t get the performances they would have liked, but we can now go back to training and use what we’ve learned in the lead up to World Cup III in Rotterdam.”

One thought on “Ben Pritchard Admits He’d Have Sunk Rowing . . . If Not For The Rival He’s Now Beating”