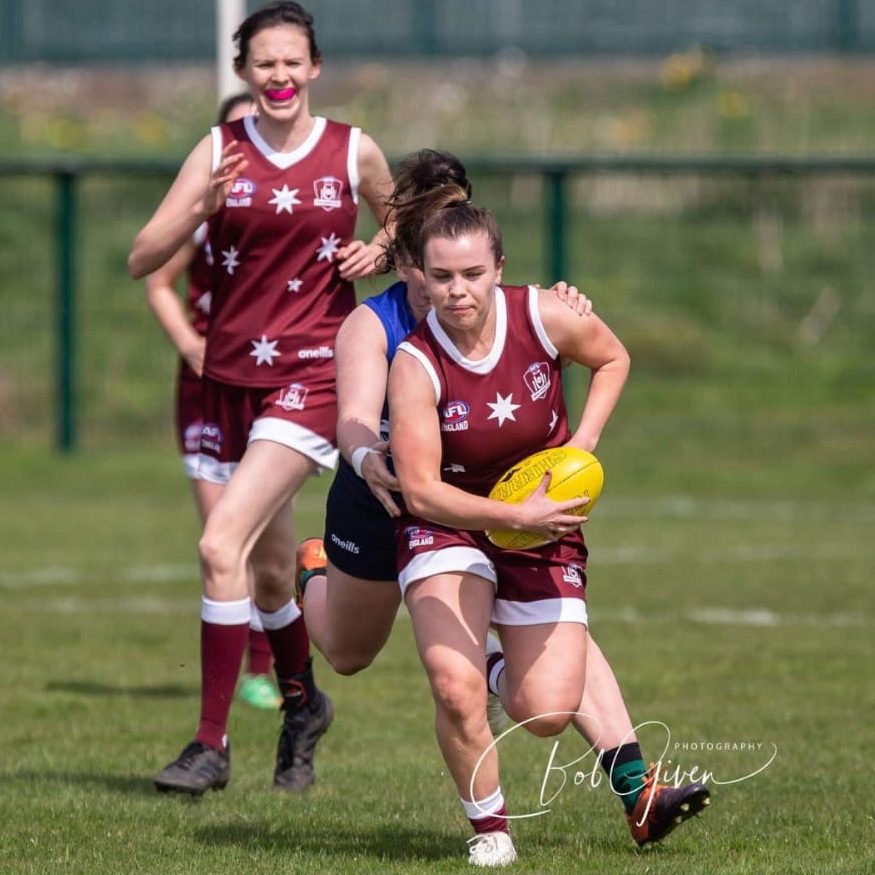 The Euro Cup takes place in Sweden this weekend, where Wales will be represented at the annual Aussie Rules tournament by both a men’s and women’s  national team. The Welsh Wyverns include former badminton international Carissa Turner, who tells Graham Thomas why she crossed over to the Aussie side.

Former Wales badminton star Carissa Turner is just one of a number of sporting refugees to find a new home in Aussie Rules.

Turner – who won European titles and represented Wales at two Commonwealth Games – is in Sweden this weekend as part of the Wales women’s Aussie Rules team competing at the Euro Cup.

Her switch from an indoor, non-contact sport to the rough-and-ready battle of Australia’s national obsession is one of the more intriguing transfer stories of the summer.

But the Wales team – who are making their third appearance at the annual tournament on Saturday – are not exactly short on sporting experience assembled from elsewhere.

“If someone had said to me as a badminton player that one day I’d play Aussie Rules, I’d have replied, ‘what’s that?’” admits Turner.

“I was quite happy in an indoor sport, but I’ve had the best time. It’s brought out a side of me that I didn’t realise was there.”

Like the Wales men’s team – the Red Dragons – Wales women have an official sobriquet. They are the Welsh Wyverns, a wyvern being a dragon with a barbed tail.

The barbs might come in handy on Saturday when they face the Irish Banshees, the Croation Queens and the German Eagles.

Although this is Wales’ third year in the tournament, it’s the first time they have not had to rope in help from Irish and Danish teammates.

Stand or fall – and they’re likely to fall heavily against Ireland and Croatia – they will be going in alone this time, on their own two feet. And their progress can be measured by the fact that eight players from Wales are now training with the Great Britain squad.

Turner adds: “Last year, when the tournament was in Cork, I’m not sure how competitively minded we were going into it. Certainly, this time we have got a good, strong team who can compete.

“We’ve got Ireland in the group which will be a really tough match. Rather than having a target of winning, we have our own targets with each game – working on the targets we have been setting in training.

“Ireland have won three of the last four Euro Cups, and Croatia are very strong. But the Germany game is one we can target and have a chance to take a scalp from.”

Most of Wales’ players play for the Cardiff Panthers – the same club that supplies the majority of the Wales men’s team – and training sessions are often mixed.

But the know-how gained from other sports has also helped, even for Turner, who has learned that the leaping ability and co-ordination required for badminton has its uses on the oval.

“The sports are quite different and I was quite anxious about the contact element, initially.

“But the position I play helps with that. I play ruck, which is the player who competes for the ball at the re-starts and tries to tap it back to your teammates.

“Badminton actually helps with that, because I can change the direction of the ball. It feels like a natural movement and I’m fairly agile.

“When I played in the Euro Cup last year there was one time when I got thrown around like a rag doll. I didn’t even see the girl coming and I ended up with whiplash.

“I woke up the next day and could barely move my neck. I thought, ‘what am I doing?’

“But it’s another sport that’s giving opportunities to women. The contact can be off-putting, but if I can cope with it, then anyone can.”