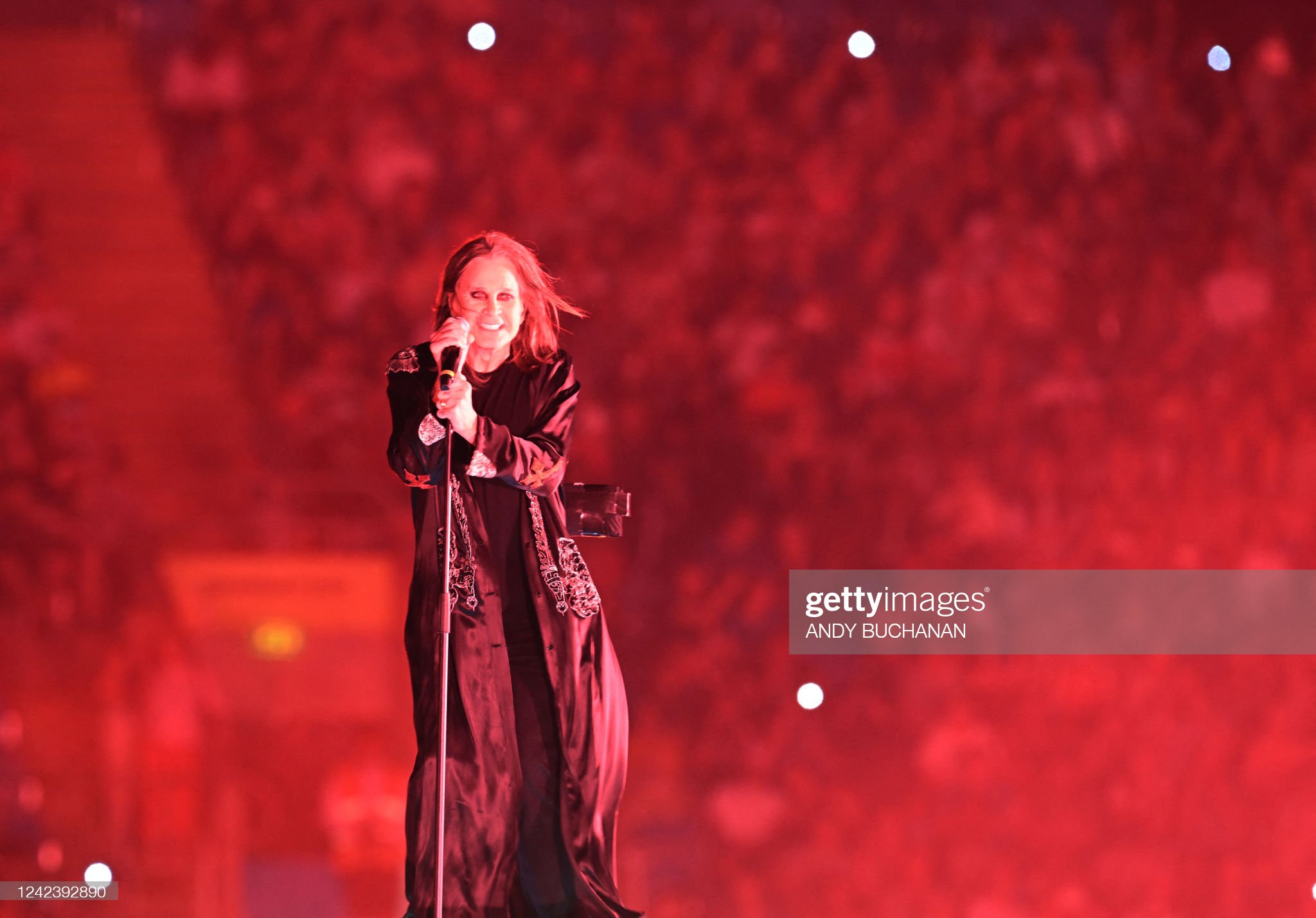 Ozzy Osbourne performs during the closing ceremony for the Commonwealth Games at the Alexander Stadium in Birmingham. Pic: Getty Images.

The final medal has been awarded, the last anthem played, and some of the temporary venues are already being dismantled. The Birmingham 2022 Commonwealth Games is over and it’s on to Victoria, Australia in four year’s time. Owen Morgan reflects on what he has seen.

Birmingham, you were absolutely bostin’!

From the weather to the welcome . . . with a huge dollop of world class sport in between.

You even produced a finale I didn’t see coming – Brum’s own Prince of Darkness, Ozzy Osborne, leading Black Sabbath in an unforgettable rendition of Paranoid to bring down the curtain on a brilliant Commonwealth Games.

Only in Birmingham, eh?

And the Welsh were at the very heart of an unforgettable festival of sport, music, culture and friendship.

We always knew there would be plentiful Welsh support on the streets and in the stands, given the proximity of England’s second city.

But no-one could have predicted quite how many Welsh dragon flags, bucket hats and inflatable daffodils would descend on the Commonwealth Games venues.

From a banjo-playing sheep at the hockey, to a rhythmic gymnastics fan riding a Welsh dragon around Arena Birmingham – we saw it all across the 11 days of the Games.

What a way to bring it all to an end!

It was an absolute pleasure to be amongst those supporters, who were true ambassadors for their nation, adding that unique splash of colour, fervour and humour only Welsh fans can.

With an army of supporters cheering them on, Team Wales responded in fine style.

Our sports men and women may not always have finished at the top of the podium, but they certainly did us proud with the pure passion and effort they put into representing us at these Games.

The medallists will obviously take the majority of the headlines and quite rightly so.

Of our eight gold medal winners, my own personal favourite was Olivia Breen’s win in the T37/38 100m final on the first night of the athletics schedule.

The BBC built up the apparent invincibility of Breen’s main rival, Sophie Hahn, before the race. Understandably so, in fairness.

Hahn was the first female track and field para athlete to hold gold medals in the same event from the World Championships, Paralympic Games, European Championships and Commonwealth Games.

The English sprinter had equalled her own world record on the way to defending her T38 100m title at the Tokyo Paralympics last year where Breen finished sixth in the final.

From the start it was clear Hahn was not going to have it all her own way.

Breen was staying with the champion in the early stages. Not just staying with her, but reeling her in and overtaking her.

The phrase “pure delight” is often used, but rarely more appropriately than to describe the smile that crept cautiously at first over Breen’s lips in the final few metres of the race and then exploded across the rest of her face as she crossed the line.

There were plenty more indelible images across Team Wales.

Daniel Salmon and Jarrad Breen dancing around the carefully manicured bowling greens of Royal Leamington Spa following their thrilling pairs win over England was a delight.

While the fiery sunset which provided the backdrop to Aled Davies and Harrison Walsh’s respective gold and bronze medals in the F42-44/61-64 discus could scarcely have been more appropriate as the Dragon roared again at the Alexander Stadium athletics.

Then, there was the gold struck by para cyclist James Ball, Josh Stacey’s brilliance in the para table tennis, plus Rosie Eccles and Ioan Croft standing atop the podium at the boxing.

One of my own biggest boasts after these Games will be that I saw gold medal winner Gemma Frizelle and her team mates Lauryn Carpenter and Elizabeth Popova perform live.

Apart from following the multiple gold medal- winning exploits of Frankie Jones at the Gold Coast games on TV, I had barely ever watched rhythmic gymnastics.

But sitting just a few rows back from the floor where Frizelle, Carpenter, Popova and the rest of the rhythmic gymnasts were performing, I found myself constantly catching my breath at their sheer brilliance.

When I played football in the lower divisions of the Neath and District Football League, it was said that I couldn’t trap a back of cement, let alone a bouncing ball.

These remarkable young women weren’t just trapping a ball with their feet, they held it under their control with various other parts of their anatomy while simultaneously performing spectacular gymnastic feats.

And their skills weren’t limited to ball control, they extended to clubs, a ribbon and a hoop.

The day after I witnessed this spellbinding control in the team final and individual finals qualifying, Frizelle’s mastery over the hoop brought her a richly deserved Commonwealth gold, a fitting reward for the hours of practice which must go into honing this incredible talent.

And the Llanelli-based gymnast achieved this feat while recovering from a back injury which would have confined most of us to the comfort of the sofa where the gymnasts sat to await their scores.

The icing on the cake for an amazing triathlon career for @NonStanford! 🧁

The most memorable Welsh quote of the Games came from Non Stanford after she brought the Welsh triathlon mixed relay team home for a hugely creditable silver medal behind red hot favourites England in Sutton Coldfield.

My all-time favourite quote by a Welsh sportsperson is Gareth Bale’s: “The dragon on my shirt, that’s all I need,” when he was asked what motivated him at the 2016 Euros in France.

But Stanford came close when an interviewer suggested after the silver medal-winning performance that it was a great time to be Welsh.

Non’s answer was perfect and these Birmingham Commonwealth Games as a whole came as close to being perfect as is possible for a major sporting event.

But it has to be said that despite being a wonderful occasion, there were some glitches.

Some of the start lists at the athletics, in particular, were on the sparse side.

Just nine athletes toeing the line in the men’s 10,000m final was disappointing, especially with the likes of Wales and Great Britain international Kris Jones, who had gained the nomination standard, sitting at home.

This happened a number of times across the athletics schedule.

Jake Heyward ran a time that wins gold in every single CWG prior to this one, and comes 5th. Just shows you can’t always judge the results by the medals alone. Still a fantastic achievement. PB, Welsh Record and beating a previous Games record. Couldn’t ask more 👏🏻 https://t.co/rdWFZUPagZ

For example, there were no Welsh 4x100m teams at the Games, despite both the men and women having clocked times this season which would have potentially seen them reach their respective finals.

The Commonwealth Games’ quota systems is something that may need looking at ahead of future events.

Despite their successes, Team Wales’ medal tally was down on their haul at the Gold Coast Games four years ago.

There were too many wonderful performances which did not gain medals to conclude that success purely comes down to how much metal is hanging around Welsh necks at the end of the Games.

Looking at athletics alone, Jake Heyward finished fifth in one of the greatest 1500m races ever witnessed – improving his own Welsh record.

His time of 3:31.08 put the Cardiff man eighth on the all time UK list – just behind the likes of the British middle distance holy trinity of Coe, Cram and Ovett, along with current world champion, Jake Wightman.

Well we threw everything at that yesterday. If you don’t try you never know eh 👍 Support was incredible racing on British roads. It’s always a special feeling racing for Wales again 🙌🏴󠁧󠁢󠁷󠁬󠁳󠁿 #dyfaldonc #haveago pic.twitter.com/jNTJA70iwr

Jeremiah Azu placed fifth in the 100m final – the best Commonwealth Games performance ever by a Welshman over that distance – and Heather Lewis broke the British 10,000m record in finishing fifth in the women’s race walk.

There were Commonwealth Games records for discus throwers Davies, Walsh and Julie Rogers.

These kinds of performances were replicated across Team Wales – not always rewarded with podium places.

And then there was Geraint Thomas.

At 36 and a former Commonwealth Games gold medallist, Thomas would have been forgiven for giving these Games a miss, having just completed a 3,328 km circumnavigation of France.

But, no. Thomas was in Birmingham and raring to go in the red skinsuit of Wales.

Perhaps, too raring as it turned out. In the time trial he hadn’t even left Wolverhampton – the town which hosted the start of the event – before he hit the tarmac.

He picked himself up, climbed back into the saddle and defied logic to claim a bronze medal.

If that wasn’t enough, he was back for more a few days later to spearhead the six-strong Welsh challenge in the 160km men’s road race.

Finding himself as the only Welshman left in the breakaway at the head of the race, the Cardiff cyclist was once again our main hope for a medal going into the final couple of kilometres.

As a non- specialist sprinter on a course that favoured the fast men, Thomas knew his only chance of winning Welsh gold was to launch a lung-bursting brave attack from distance in the last couple of kilometres.

He could have played it safe in the hope of claiming one of the lesser medals. But no, Thomas wanted gold and launched the ultimate “shit or bust” attack.

That it ended in failure mattered not to those draped in the dragon on the streets of Warwick. Geraint had gone for it. We were proud of him and hopefully he knew it.

He had once again shown bravery and desire in the Welsh cause.

And that was true of all those who’d lined up under the banner of Team Wales.

Agreed, @OzzyOsbourne. What a way to celebrate the end of 11 incredible days of the Birmingham 2022 Commonwealth Games!

That’s the thing about the Commonwealth Games. You know that every single member of the team are there not just because they want to be, but because of their burning desire to be wearing the red of Wales.

That’s why we followed them in our droves to Birmingham.

And the welcome we, and all the other supporters who arrived from around the globe, received, was second to none.

The event was superbly organised, with the 14,000 Games volunteers acting as the collective smiling face of the host city.

Any slight sign of hesitation deciding whether to turn left or right on the street or at an event usually saw an orange and grey clad volunteer bounding into view asking if they could help.

And on the rare occasion there was no volunteer to hand, the locals would step in with a concerned “are you lost?” or “where are you trying to get to”?

Brummies and residents of the wider West Midlands, you can be hugely proud of the warmth of the welcome you provided.

Congratulations to all the athletes that competed at Birmingham 2022.

And you can be equally proud of the facilities that hosted the Games and the organisation put in place.

It was unquestionably Birmingham and England’s home Games.

But with so many Welsh people on the streets and in the stands across the West Midlands – and even imported Heddlu officers pounding the beat – it felt like a real home from home.

A cheeky Welsh bid for the 2034 Games anyone?

Just imagine how wonderful that could be.