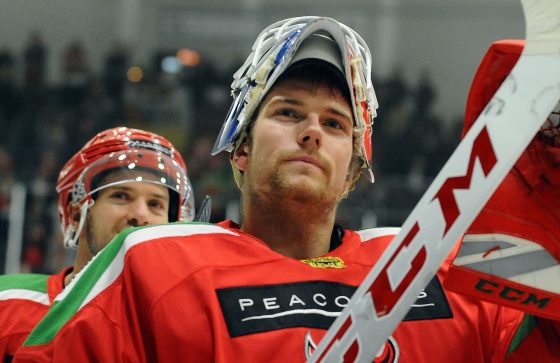 Former Cardiff Devils netminder Ben Bowns says he is on the journey back to the ice – just don’t ask him when it will be finished.

But he is finally back between the pipes – if not quite ready for a full return to action yet.

“I’ve not done a full practice so I need to be fully cleared by the doctor before I can join that.

“I’ve also got another MRI scan to come to check and make sure everything is going as planned.

“It’s a day by day thing really and it started by going out in no kit, then gradually adding more and more before you try moving and dropping for shots.

“We’re still a little while off. I’ve got a date and a timeframe in mind for when I would like to come back, but I’m keeping it to myself. I don’t want to put myself under any extra pressure.

“With the position, I need the MCL to be at full strength. One wrong move could put me back a bit.

“It was nice to be back on the ice and feeling it under my feet. It’s certainly good to be back rather than being a little loner.”

The Yorkshireman earned his move to Austria after six trophy laden seasons with the Devils.

But he suffered the injury in a 2-1 loss to Dornbirner – but fortunately did not require surgery which would have meant an even longer spell on the sidelines.

Bowns says he was determined not to let the injury set-back derail his bid to impress in Austria and was determined to recover as quickly as possible.

“You can deal with it in two ways,” added the 29-year-old. “You crack on and work hard to get back and hopefully come back sooner than expected or you can sit and sulk, do nothing about it and maybe be out longer.

“It was my MCL (medial collateral ligament) and ACL (anterior cruciate ligament) that were hurt. Thankfully, it wasn’t not as bad as first feared and I had to wait eight weeks before I knew if they would operate on it.

“If I had the surgery, it would have been game over for me as far as the season was concerned, but I would have done all I could to try and get back.

“The odds would have been against me, so to hear the news was good.”