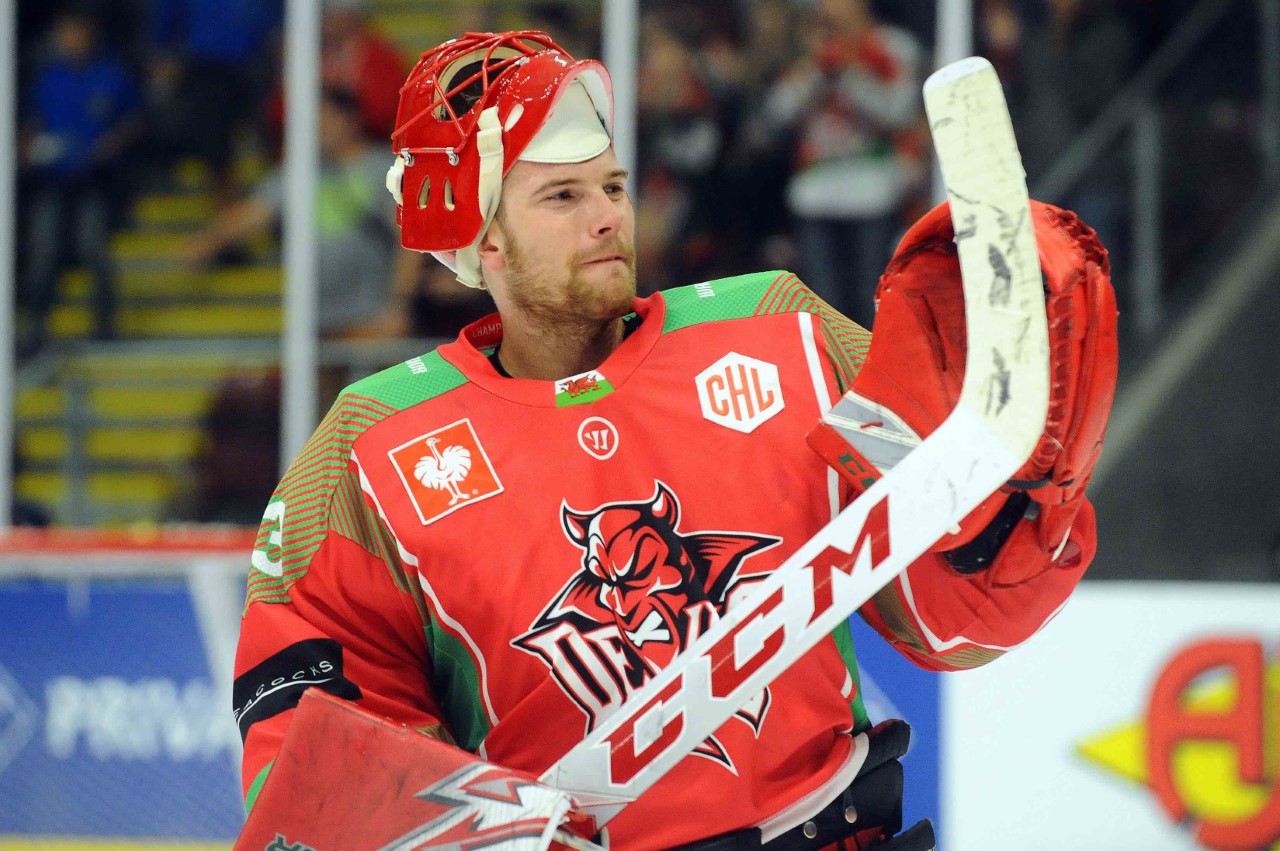 Ben Bowns, the most successful starting goalie in Cardiff Devils history, faces having to overcome a huge injury setback if he is to make a success of his move to Austria.

Yorkshireman Bowns, a man at the heart of every Devils trophy success over the last six years, suffered a badly damaged knee playing for Graz 99ers against Dorbirn and was taken off the ice on a stretcher.

He was hurt in an on-ice collision, twisted his knee and it was some time before he was able to leave the pad.

There were initial fears that goaltender Bowns could be ruled out of playing for up to a year, but the latest prognosis suggests a much better outcome.

Doctors have had to wait for swelling to go down before deciding exactly what action to take, but there is some hope that Bowns may play again later this season.

Ontario-born Doug Mason is the Graz coach and his reaction was: “Ben’s knee is broken, I’m sure of it. I’ve seen it and I know it’s not good.”

Ben Bowns absolutely ROBS Jack Hughes of his first goal of the World Hockey Championship. What a save! pic.twitter.com/PwiK27ZFif

Graz insist they will stick by Bowns, saying in an official club tweet: “Ben is very much still a 99er. He is doing his recovery and is with the team daily, helping the coaches with an extra pair of eyes.”

Another club statement said: “The shock was great he was injured. Bowns will be out for a few months.

“We wish him all the best and support him in his recovery.”

Bowns, who has been learning to speak the local language in Austria, is helping out on the coaching side while he waits for probable surgery, spending a lot of time at the rink.

Graz-born back-up goalie Felix Nussbacher stepped in to make his 99ers debut at home against KAC on ice where he learned to skate.

Now Graz have signed Rodrigue, who was selected by Oilers in the second round of the 2018 NHL draft and spent last season playing for Quebec Major Junior League Moncton Wildcats. His father, Sylvain, has been Oilers’ netminder coach for six years.

Former Devils kit manager David ‘Dease’ Owen is now in that role for Graz and, along with girlfriend Gwennan welcomed Ben and Jade to Austria.

There was also personal success with Bowns selected for the Elite League’s First All-Star Team three times out of his six years in Cardiff. He was also selected Elite League’s Netminder of the Year three seasons in a row from 2015-16 through 2017-18 and the best British player twice.

His 33 shutouts are a franchise record, including a league leading nine 2018-19.

Sadly we have to announce that Ben Bowns will be out of action for a a few months after a collision during the game last night. We wish him all the best and support him in his recovery.

Bowns also led Team GB to successive gold medals and promotion to the top division of the World Championships where they will once again compete in 2022.

He said at the time of his departure from South Wales for his drive to Austria: “Going to Graz is a great move for me and made a lot of sense.  It’s a great rink, having played there with Cardiff in the Champions Hockey League last year.

“The coach [Doug Mason] is an English speaker which helps and having a familiar face in Dease is great also for us. Plus Dease’s girlfriend, Gwennan is some familiar company for Jade too.

“Going to a new city and experiencing a different culture with someone I already know is very settling and will be a big help to us.”

Now Bowns is facing up to his personal challenge. He is a naturally upbeat person – always the joker in Devils dressing room – and well be helped during his rehab by family, friends and team-mates from Cardiff and Graz plus the outpouring of supportive messages from Red Army ice hockey supporters in South Wales.