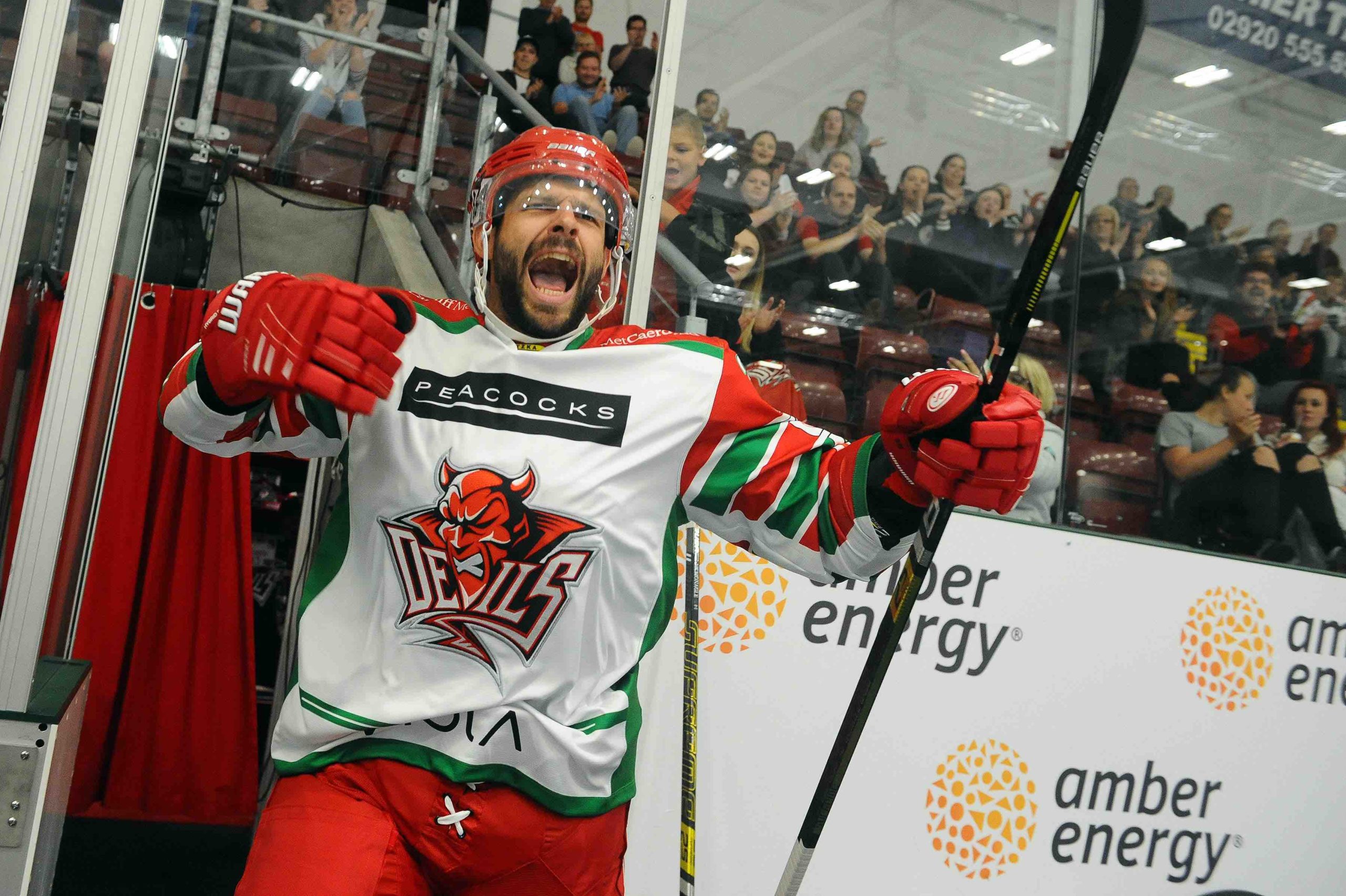 Winger Blair Riley planned to be powering down the ice for Cardiff Devils right now. Instead, he’s building a new career, learning the trade of highway construction back in his native British Columbia. Dai Sport’s ice hockey writer Terry Phillips caught up with the Canadian international at his home in Kamloops.

Blair Riley talks passionately about winning the Elite League title and believes Cardiff Devils would have been crowned British ice hockey champions in 2020 has it not been for Coronavirus.

Canadian forward Riley felt the buzz of glory with Belfast Giants in 2019 and Devils were leaders when the season was cut short, denying the Welsh club a tilt at what would have been a third title in four seasons.

“There is no doubt in my mind we would have been champions had the season finished normally,” he says. “It would have taken a shine off it if we had been awarded the title knowing season was not complete.

“Not being able to finish the season sucked for everybody, especially Devils. I wish we could have played five more games.

“I wish we had won the league title we were well on our way to getting.

“I haven’t cried about it. Maybe we got a bit of a raw deal, but so did many other people. There are far bigger issues going on Worldwide than our league title chase.

“The reality is that we did not finish the season.”

Riley had already committed to Cardiff Devils for 2020-21 when the whole season was suspended and that decision brought an end to his career.

“I hope and believe the league will come back stronger than ever, but I won’t be involved,” added the 34-year-old.

Riley is now working on highway construction back in Kamloops after calling a halt to his professional playing days.

“I have been fortunate to play professionally for 10 years,” he said. “A phenomenal experience. Good times, amazing friends and memories I will cherish.

“It’s been a different summer for most ice hockey players with lots of uncertainty. As the summer went along, started to really think about where I was at in my life.

“My family are in British Columbia and I miss spending time with them. My nephew is four-years-old now and I’ve missed important time with him.

“My girlfriend is also from Kamloops with family and friends there.

“A cousin of mine has been in project management for 15 years, started her own niche highway construction company in 2017 and offered me chance to start out as project co-ordinator. I’m learning the business.

“It’s right in Kamloops and is a fantastic opportunity for me. That’s what I have been doing last five weeks, trying to take in as much as I can, learn and grow and see where it takes me.

“It was disappointing for the EIHL to end as it did, but we are in a serious situation. That puts things in perspective.”

Riley signed for Devils from Giants just over a year ago, making 40 appearances and scoring 18 goals with 13 assists.

“Managing director Todd Kelman, the club’s ownership group and Lordo [head coach Andrew Lord]  were aggressive in getting me to come over and they delivered on everything.

“Devils do right by the players, have built an organisation their fans can be proud of and one I was proud to represent.

“It was a tough decision to leave Belfast, but looking back now it’s something I’m happy I did. There were a lot of core guys in Cardiff and I had a lot of respect for them.

Another one of my favourites retiring… Thank you @Briles25 – it was far too short, but we loved having you as a @cardiffdevils – we are going to miss seeing these celebrations next season… pic.twitter.com/a9aXc9nPUL

“Both Cardiff and Belfast are wonderful cities. Devils and Giants are special clubs. Good places to live and play. I am extremely fond of both.”

“I was able to lift my first championship trophies as a hockey player with Giants and did it with a special group,” he says. “My thanks, too, for the entire Cardiff Devils organisation for giving me the chance to play in beautiful Wales.

“When the league returns I expect the Devils will be right back at the top competing for titles every spring like they have been for the past five seasons.

“I’m keen to revisit both cities in the future and jump in the fans section when I next head to South Wales. I will follow both teams via social media when things get going.”

BR: “In my early 20s, earning 415 dollars a week and certainly not living the lavish Las Vegas lifestyle.

“That’s where I met Sean McMonagle. We played there as rookies and became good friends.”

BR: “There were a couple of call-ups for Peoria Rivermen and San Antonio Rampage for a short spell each while I was at Las Vegas.

“Bridgeport was then do or die – stick around or probably be branded as a pure ECHL player.

“It was kind of my last opportunity. I learned how to play a physical role, make space for myself and showed I had an all-round game.

“I had two pretty good years at Bridgeport.”

BR: “Spent pre-season time with Calgary Flames and was put into the line-up right before warm-up against Vancouver Canucks, who I cheered on for my whole life as a youngster.

“I got into a fight with Brandon Prust on the second shift, one and a half minutes in.

“I went to the penalty box and discovered the coach hadn’t changed our line-up card. I wasn’t supposed to be playing, wasn’t due to be in the warm-up and wasn’t on team sheet.

“The refs came over and my night was done. I was kicked out of the game.

“Kenny Agostini had to come down from the press box put his gear on and finish the game. He became one of my better buddies.

“Bob Hartley was coach and next night we flew to Vancouver and played a second game in front of family and friends.

BR: “Agostini was with me at Stockton, but I missed something like 20 games with a shoulder injury.

“That made a decision to move overseas a lot easier for me.”

BR: Steve Thornton [Giants head of hockey operations] gave me an opportunity to continue my career in Europe and continue my education in a Master’s programme at Ulster University.

“That programme was a huge draw for me at that time. Steve reached out and said they would give me opportunities to play big minutes and get involved on special teams.

“I was enjoying the game again after difficult times because of that shoulder injury. It was a great move for me.

“Winning the League title ahead of Devils was my first trophy as a professional.

“We had completed our Giants EIHL fixtures and we didn’t expect it going into the last day like that. Devils had to lose against Coventry Blaze and it was Belfast’s awards night.

“Our family were all at the banquet as well. Devils lost (1-3). It was a bizarre way to have something like that happen, but what a night it was.”

BR: “The pandemic brought everything to a halt. I had a couple of opportunities to play elsewhere in Europe, but I was comfortable playing for Cardiff.

“As things moved along I really had to make a decision. Sitting out a season at my age [34-years-old] was not realistic.

“The logical step was to end my playing days. It was fortunate that a job opportunity came up and I was able to start a new career.”

“Winning the Spengler Cup with Canada was special, unexpected. A unique experience.

“I was happy to experience that in my final year ends up. To represent Canada and win the gold medal.”