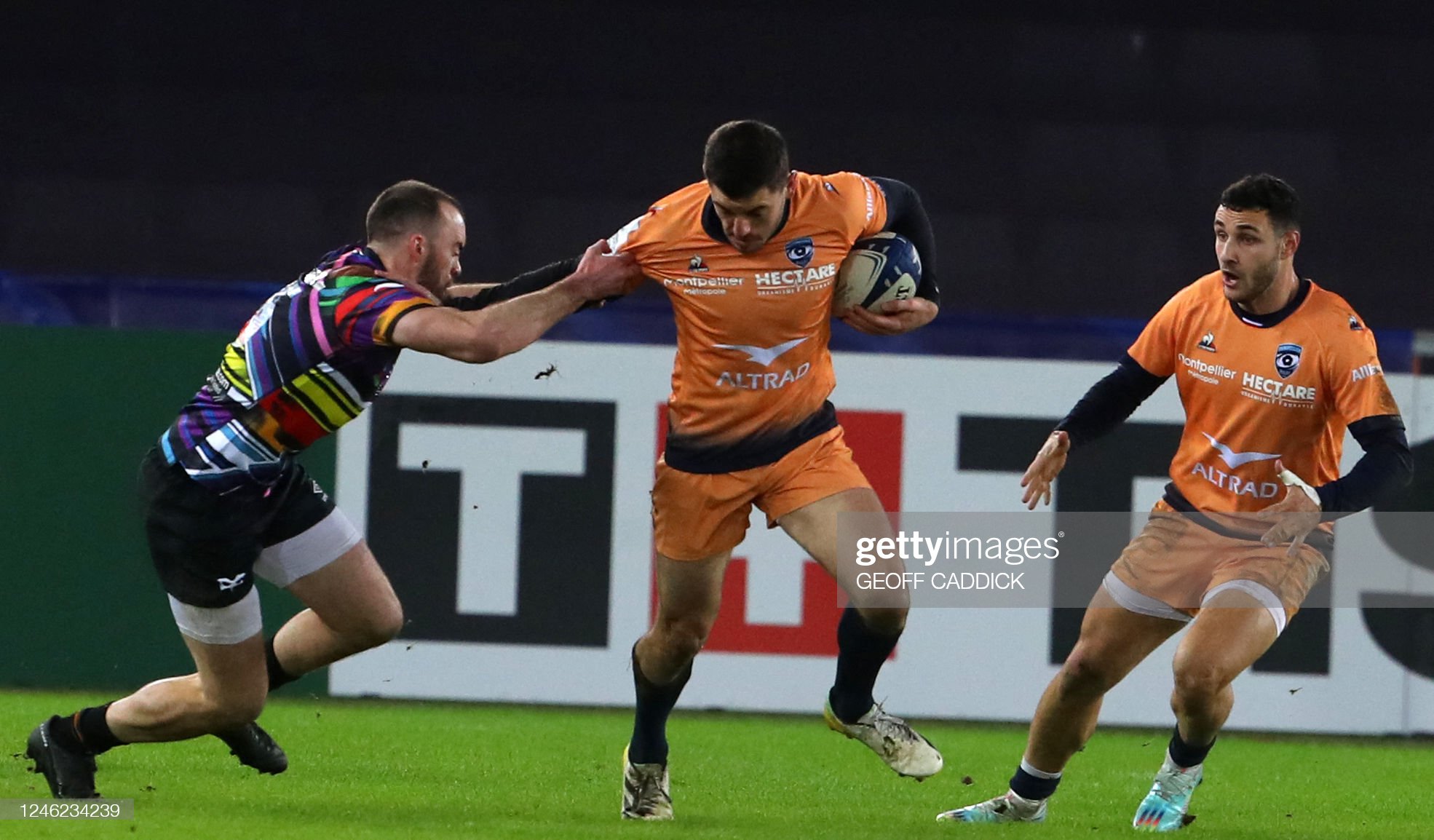 Cai Evans has earned fulsome praise from Ospreys head coach Toby Booth after his superb goal-kicking helped take his side to the brink of qualification for the knockout stages of the Heineken Champions Cup.

Evans landed three conversions and three penalties to claim 15 points as the Ospreys beat Montpellier 35-29 in Swansea, despite being outscored by five tries to four.

The difference was the goal-kicking of Evans – son of Wales legend and Welsh Rugby Union chairman, Ieuan – as the French champions missed four attempts at goal.

The result was that in the space of a month, the Ospreys have achieved two of the most significant results in Welsh regional rugby for years – back-to-back, home-and-away victories over the champions of the Top 14.

The Ospreys now travel to face English champions Leicester next Friday as they bid to seal their place in the knockout stages.

Wales wing Alex Cuthbert crossed for two tries as the Ospreys completed the double with a bonus point win at the Swansea.com Stadium.

It was enough to guarantee them a ticket into the last 16 stage of European competition, but results in the final round of pool games next weekend will determine whether they continue in the Champions Cup or drop into the Challenge Cup.

They head to Welford Road to face English champions Leicester Tigers on Friday night. The Tigers are unbeaten in their three games and are already through to the last 16 of the Champions Cup.

As well as Cuthbert two tries, skipper Justin Tipuric and fellow backrow man Morgan Morris both crossed for tries. Montpellier captain Paul Willemse crossed for two first half tries for his side.

“He has grabbed his opportunity and is really thriving after what has been a difficult journey for him with injury.

“I am pleased for him and his family because he is fulfilling the potential that he has got.”

Tipuric scored a brilliant individual try and gave another demonstration of his special talent.

“I have not seen much like that,” said Booth.

“He reminds me so much of Olivier Magne, who I had the pleasure of coaching at London Irish and was a freak of a player,” added Booth.

“Not just as an athlete but also as a rugby player. He could probably have played six, seven, eight nine, 10, 12 or 13 or 15 and Justin is exactly the same. We have the man in the blue hat who can play anywhere.

“His skill-set is ridiculous, he sets the bar for the team and is leading exceptionally well.”

The Ospreys had recorded one of their best wins in Europe when they shocked the Top 14 champions in a 21-10 victory on French soil before Christmas.

This time they led at half-time and were forced to hit back twice in a compelling see-saw contest after the break before sealing another famous win.

Fly-half Louis Carbonel missed an early penalty for the visitors in a frenetic opening quarter which saw scrum-half Rhys Webb leave the field with an injury. Cuthbert crashed over from short-range after a sustained period pressure to give the home side the lead.

Another Evans penalty made it 13-10 at half-time to the Ospreys and then the hoe full back added a third penalty to extend the lead. The Top 14 outfit hit back with a try by lock Bastien Chalureau, but Cuthbert’s second try, converted by Evans, put the home side back in front.

Montpellier centre Thomas Darmon raced in for his side’s fourth try to edge their noses in front again, but the Ospreys refused to be beaten. Tipuric then started and finished a wonderful counter attack that saw the home skipper put in a pin point chip for Kellan Gules to latch onto and then a great turn of speed and dive in for one of the tries of the season.

Cobus Reinach hit back with the French side’s fifth try before replacement backrower Morgan Morris crashed over from a driving lineout to seal the win.