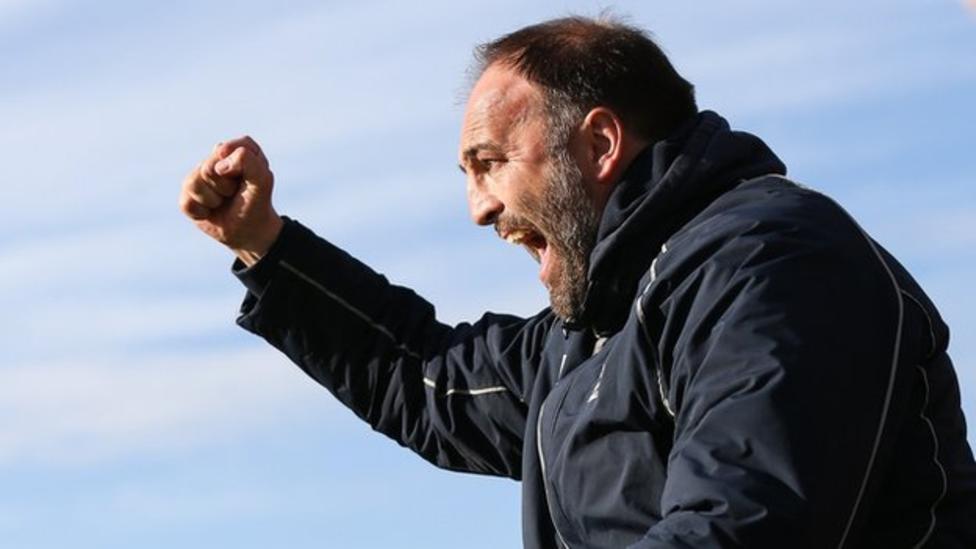 Cardiff Met University manager Christrian Edwards saw his side bow out despite an heroic effort.

Cardiff Met manager Christian Edwards believes all the pressure is on their opponents tonight as the students bid to extend their European football adventure.

Edwards’ side host Luxembourg’s Progres Niedercorn, trailing 1-0 from the first leg of their Europa League preliminary round tie.

A crowd of 2,000 crowd is expected at Cardiff’s Leckwith Stadium to witness Met play their first ever European game on home soil after a fortnight in which the Welsh Premier League club have enjoyed unprecedented media coverage.

Edwards believes his team can play without fear and that all the nerves will be felt by the Luxembourgers.

“We looked at the way they played and how their manager played at previous teams.

“They’re a possession based team, ball dominant, and like to penetrate central areas and we restricted them to eight balls through the middle in 90-minutes which was very disciplined from ourselves.”

“There were eight passes that were made and none were successful – that’s from the data that’s come back and we’re very pleased with that.

“But it was nothing that we haven’t worked on all pre-season, blocking the central areas, defending from crosses as we are traditionally expected to do, week-in week-out.”

But Edwards admits that Met – now without top marksman Adam Roscrow who left for Wimbledon – need to find some goal-scoring spark if they are to continue their journey.

“One thing that we recognised instantly is that we need to offer more of an offensive threat.

“We played a lot of football in front of them last week, which helped them, but we’ve worked on that this week, so we’re happy with the way things have gone and we look forward to the game.

Edwards has a clean bill of health and will take heart from a committed first-leg performance that saw them restrict Niedercorn to just a handful of chances.

Despite trailing to Mayron de Almeida’s second-half goal, the Archers have kept alive their hopes of advancing into the next round.

“There was stuff that we can eradicate and believe we will do that,” added Edwards.

Welcome back, @jordanjaylam! After a season away, Jordan has returned to the club and will also be resuming PG studies. 🏹 pic.twitter.com/kjxYnVjwq2

Much of Cardiff Met’s chances will again rest on how they manage without departed top-scorer Roscrow.

Without him Met struggled to penetrate Niedercorn in the first-leg, but where one door closes another opens and the Archers might just have an ace up their sleeve in returning winger Jordan Lam.

Lam was touted as one of Cardiff Met’s most talented prospects when they emerged in the Welsh Premier League three seasons ago, but after struggling for form with various spells in England, the 24-year-old has returned to the club and made a second-half appearance last week.

“He’ll come back in and he’ll do well,” said Edwards. “He’s lost his way a little bit and he’ll be the first to admit that.

“As always in football, things change and he felt the need or wanted to come back. He sees us as his extended family.

“He isn’t the Jordan Lam that arrived in the Welsh Premier League three years ago but we’ll get him back to that place – if not better.”