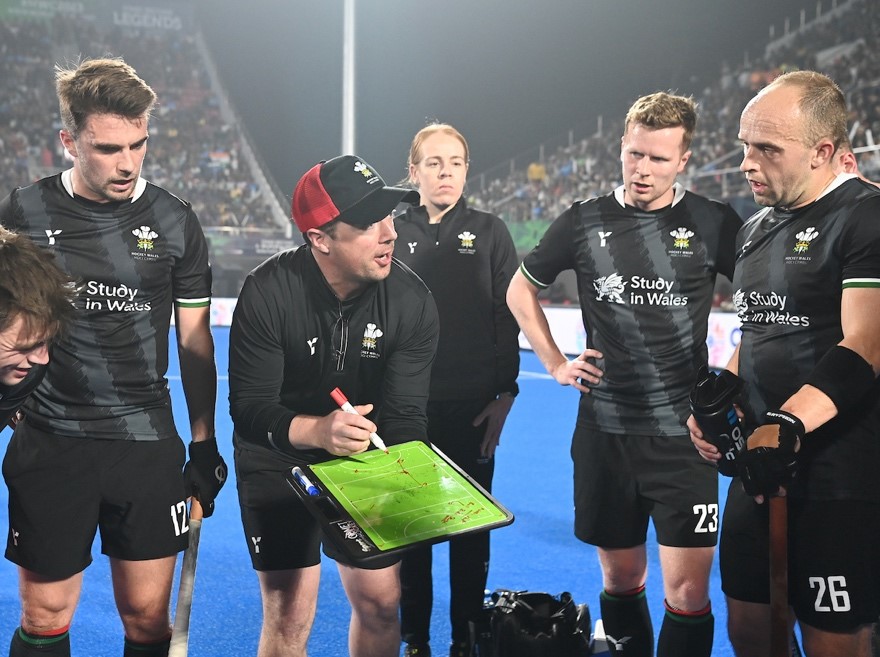 Wales head coach Danny Newcombe has admitted his team have fallen short of his high demands at their first Hockey World Cup.

Wales’ progress at the tournament came to an end on Friday when they lost 4-2 in their final Pool D match against hosts India.

It was a hugely improved display from Wales who had previously suffered heavy defeats to Spain and England.

A brilliant goal from Great Britain international Jacob Draper brought Wales level at 2-2 at one stage, but the Indians – who moved into a 2-0 lead – were able to re-assert their authority with two further goals in the final quarter.

It means Wales miss out on a place in the quarter-finals, but will play two more matches in a bid to secure possible a ninth-place finish.

Newcombe conceded Wales’ tournament has been a frustrating experience.

“The key frustration for me is that if we’d played like in all three [pool matches], one of them could’ve gone our way,” said  Newcombe.

“The key learning for our next tournament is we can’t wait two games to turn up. It’s not acceptable.

“The other key thing is we take the momentum from today and we go and turn that into two results in the next stage.

“For us it’s all about finishing ninth, which for us in our first World Cup would be a huge achievement.

Gareth Furlong, Wales’ other  goalscorer alongside Draper, said: “We were a little bit disappointed after the first two games that we probably hadn’t given the best account of ourselves.

“The intent was there to go out and match them for as long as possible, which I think we did.

“Obviously a little bit disappointed with the final result but the performance was significantly better than the previous two games.”

India tried but Wales were no pushovers. The team which reached India after spending money from their own pockets and crowdfunding, went out but not before giving India a tough fight in their 2-4 loss#HWC2023 #Hockey

India had a mountain to climb if they wanted to earn the top spot in Pool D and qualify for the quarter finals without having to go through the crossovers, needing to win the game by eight goals to overtake England in the standings.

But Wales were no pushovers and competed well in the first half, keeping India at bay till the 22nd minute.

Shamsher finally found the back of the goal for India with a thundering strike after Harmanpreet’s attempted drag flick was run down by the Welsh first rusher.

That would be the only goal India would score in the first half as hopes of topping the group faded for the hosts.

The second half started with an Indian goal by Akashdeep early in the 3rd quarter, but as India searched for more goals, Wales got a chance to launch counters of their own and as the 3rd quarter came to a close, Wales scored twice to stun the crowd and go into the final 15 minutes on level terms.

Akashdeep added a second stunning goal at the start of 4th quarter to give India the lead back and Harmanpreet finally opened his account in the final minute of the game as India won a penalty corner after Wales had taken their keeper off for an outfield player.

The result confirmed India’s 2nd spot in Pool D and they will now take on New Zealand, who finished 3rd in Pool C, in the crossovers for a spot in the quarterfinals.

Akashdeep Singh was awarded player of the match for his two stunning goals and said: “We weren’t very good in the first half in terms of executing our plans, but the second half was better.

“Thank you to all the fans who turned up and please keep supporting us just like this!”