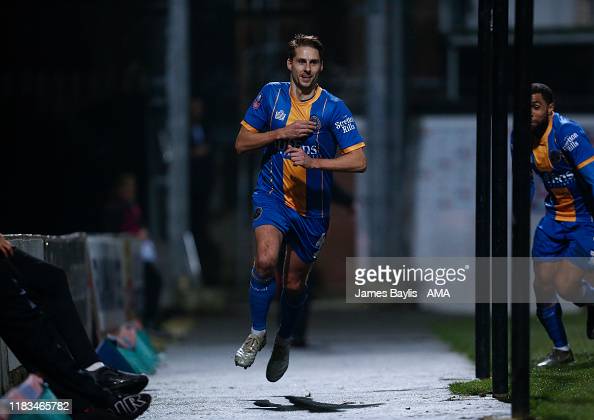 Shrewsbury Town's David Edwards celebrates after scoring a goal to make it 0-1 during the FA Cup First Round Replay match between Bradford City and Shrewsbury Town. Pic: Getty Images

The last time David Edwards was involved in a semi-final was for Wales against Portugal in the Euros in 2016.

Five years on the former Wolves midfielder will be in the thick of the action tonight (Friday) when Bala Town take on Connah’s Quay Nomads in the Nathaniel MG Cup semi-final at Maes Tegid. The second semi-final between Cardiff met and Barry Town United is on Saturday.

Despite playing more than 300 games for Wolves in the Championship and Premier League, a further 200+ for Shrewsbury and another 50 for Reading and Luton Town, the 35-year-old hasn’t enjoyed much success in cup runs.

He was an unused substitute, along with Joe Hart, when Shrewsbury won the National Conference pay-off final against Aldershot on penalties in 2004 at Stoke’s Britannia Stadium, and once again sat out the 2-0 defeat suffered by Wales against Christian Ronaldo’s Portuguese side in France.

So, tonight he is determined to make up for lost time and steer his new club into their first major final since they won the Welsh Cup for the first time in 2017.

“I’ve never really been able to enjoy a good cup run before in my career and the last time I reached a semi-final was with Wales at the Euros in 2016,” recalled Edwards.

“I’m really excited and we are going into the game on the back of a good win over Flint in the JD Cymru Premier. We stopped the rot the previous weekend with a draw against Newtown, but know only too well that when the Nomads last came to us they won 4-0.

“It would be great for the club, and me personally, to get to a final. We are also still in the Welsh Cup and have a quarter-final at home against Aberystwyth Town to look forward to in February.”

Edwards has already made a big contribution to the Lakesiders getting this far. He stroked home a penalty that earned a 1-1 draw at Flint Town United and then stepped up to score again in the penalty shoot-out as Bala went through 3-1.

Bala then pipped Tier 2 side Colwyn Bay 8-7 in another penalty shoot-out in round three before disposing of visiting Newtown 3-1 in the quarter-finals. Now it is going to be a revenge mission against the ever-improving Nomads, who beat Bala 2-0 at the semi-final stage on their way to winning the title in 2019 when the competition was last played.

“The Nomads are an excellent team and they have changed their style since switching managers earlier in the season. They play a more possession-based game now and they played us off the park when we met in the league,” added Edwards.

“I’ll be coming up against one of my former Welsh team mates, Neil Eardley, who has joined them this season and made a big difference to them. We came through the Wales age grade teams together and they played at senior level.”

Edwards has been able to catch-up with a few other ex-Welsh internationals during his time at Bala. David Cotterill is at Newtown and Jazz Richards is at Haverfordwest.

“They’ve all told me how much they have enjoyed playing in the JD Cymru Premier League and we’ve all been impressed by the standard. It has made us all fall back in love with football again,” said Edwards.