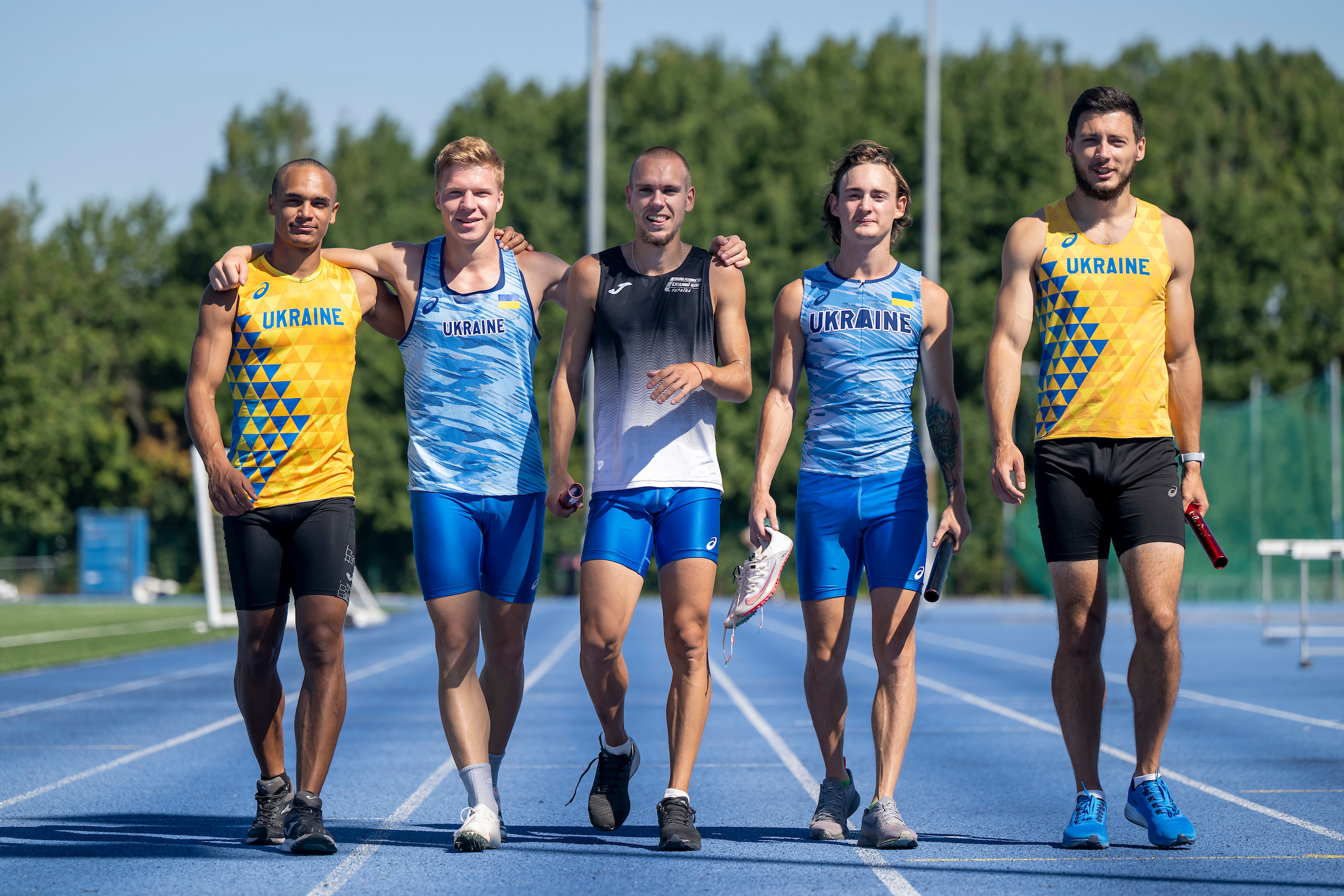 Welsh sprinting sensation Jeremiah Azu’s coach Gareth Walton has another interest in the European Championships on Friday – the fate of the Ukrainian relay squad.

Walton, who played a role in preparing individual bronze medal winner Azu as part of the Great Britain 4 x 100m team, has also been sharing his wisdom with another nation.

They are the squad from war-torn Ukraine, who have honed their skills at Cardiff Met University in readiness to take their marks in Munich on Friday morning for the heats.

Kyrylo Prykhodko, Stanislav Kovalenko, Andrii Vasyliev, Oleksandr Sosnovenko and Vasyl Makukh have spent the last three weeks working on their speed and baton exchanges at Cardiff Met after the university opened its doors and hearts to them.

It all began a conversation between Cardiff Athletics sprints coach Walton and Ian Bezodis, a senior lecturer in sport biomechanics at Cardiff Met, and led to seven Ukrainian athletes and three coaches being invited to the Welsh capital.

Walton met Sergiy Basenko at an athletics conference in Moscow two years ago and struck up a friendship with him. At that time neither could have forecast what would occur in Basenko’s homeland.

When they spoke again recently the plight of the Ukrainian sprints came to light – some were in Bulgaria and another in the Czech Republic – and so Walton asked Bezodis if there was anything Cardiff Met might be able to do.

As a University of Sanctuary, Cardiff Met had been working to support the people of Ukraine since the Russian invasion earlier this year.

The university has pledged £400,000 over the next two years in fellowships and scholarships, as well as a wider variety of projects including accommodation, for those fleeing Ukraine.

That’s why the athletes were welcomed with open arms and provided with free accommodation, food, coaching, facilities and physio and massage services.

Their time at Cyncoed has given them the chance to properly prepare for Munich and given them the  chance to forget the horrors that have been seen in their homes in Kiev, Donetsk and Zaporizhzhia.

“Being in Cardiff gave us a rest from the situation back home. It has given us the chance to prove our worthiness in the fact we are saved from the war,” said Sosnovenko.

“We want, we must and we need to improve our skills to show we are worthy to compete in Munich. I want to show the world that I am a strong athlete and we must get into the final.”

The fastest man in Ukraine this year, Sosnovenko has already raced at the World and European U20 championships and is the team leader. He was given the chance to escape to the Czech Republic in April and has been training and racing in Prague.

“My mother is living in Germany with friends and I was invited to go to Prague earlier in the year. My teammates went to Bulgaria before we all came together in Cardiff,” he added.

“After Munich I’m going back to Prague for a few more races. After that I don’t know where I will end up – I don’t have a home or any money to rent somewhere.

“Things are simply getting worse in Ukraine. We’ve lost our homes, our people and our cities. There is no escape and the Russian military forces are heading towards new cities – the situation gets worse every day.

“We love our country and we want to go home, but by participating in Munich we hope to prove that Ukraine is a strong nation. Physically and mentally it is very difficult for us and while we have received support from all over the world, it can never be enough.

“There are alarms and air attacks every day and you must train while the attacks are going on. You fear for your family and friends and keep wondering if a bomb will crash from the sky.”

The only interruption at the athletics track at Cardiff Met has been from the rugby players honing their skills of the upcoming season.

The Ukrainians have been able to polish their own skills and get ready for their big moment.

“We are warriors on the track for our country. I feel very proud to be flying the flag for Ukraine and I always get goosebumps on the track waiting for the announcement that says I am representing my country,” said 21-year-old Vasyliev.

We (@CardiffSpeedHub) have spent the last three weeks helping the Ukrainian 4×100 team in their preparations for Munich. Go well lads and see you again soon. #Hup 🏃‍♂️🏃‍♂️🏃‍♂️🏃‍♂️🇺🇦🏴󠁧󠁢󠁷󠁬󠁳󠁿🇬🇧https://t.co/J8hXCYe2Ib

“Without the help of other countries, it wouldn’t be possible for us to train. Back home it is impossible to train because the sirens keep going off.

“I was only 13 years old when the Russians first invaded and I didn’t understand what was going on.

“This can’t be right in the 21st century when countries have so many other issues to deal with and should be working together rather than fighting each other.

“What is going on is really crazy – and it has been going on for eight years.  By representing our country, I hope we are showing the world we are not stopping and that we love our country.”

There was one final surprise for the athletes at the end of their final session on Tuesday when they had a visit from one of Britain’s finest athletes, and a former Cardiff Met student and lecturer, Lynn Davies.

He brought along his 1964 Olympic long jump and 1966 European Championship long jump gold medals to show the sprint quartet what they should be aiming for.

“You have to admire the fighting spirit of the Ukrainians and these athletes have done everything they can to represent their country,” said Davies.

“They say in sport that success is 99% perspiration and 1% inspiration, so I just hope that by showing them my medals it will have inspired them.”