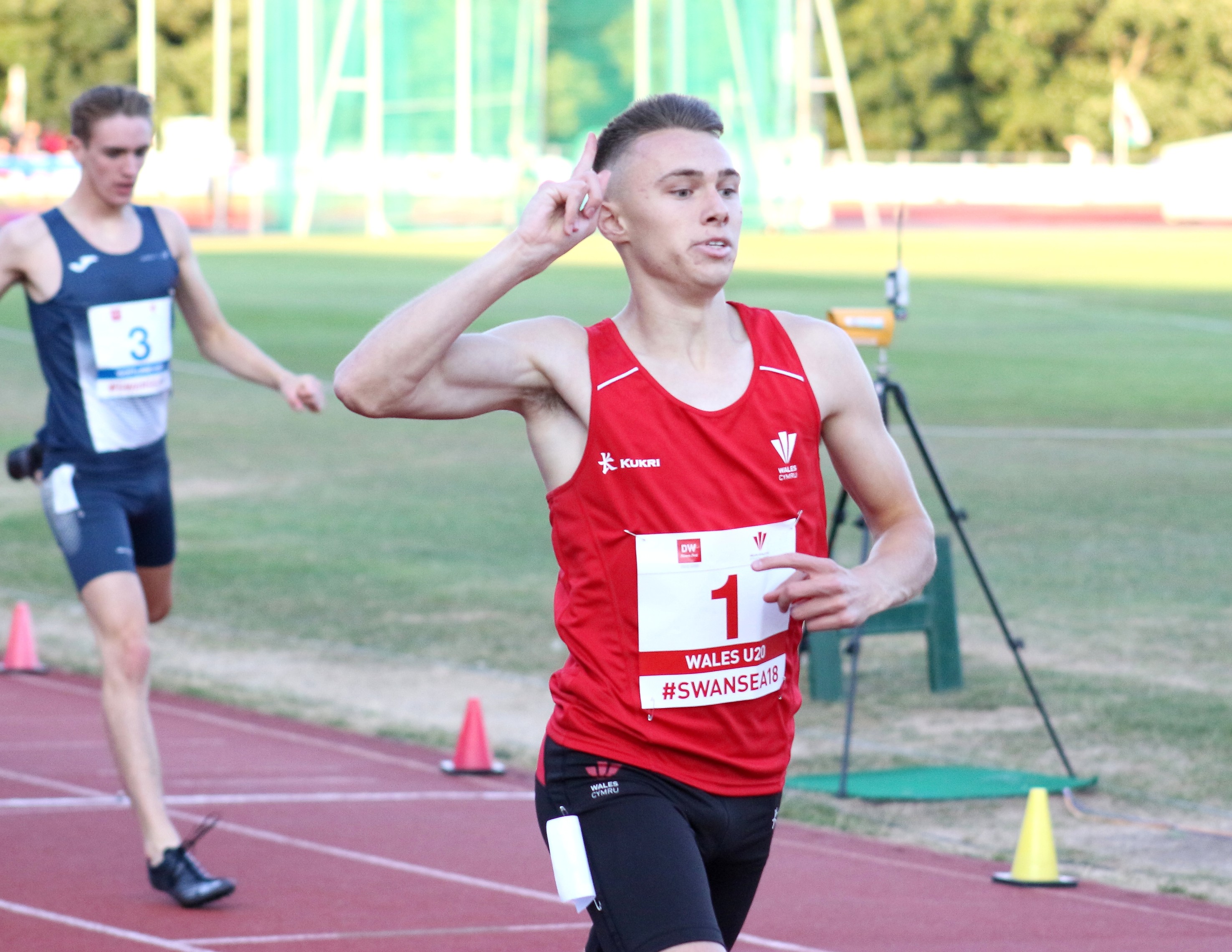 Three Welsh runners will be in Poland this weekend, taking on the continent’s best in the European Indoor Athletics Championships. In the first of three features, Owen Morgan has spoken to the youngest of the trio – 400m star Joe Brier.

Joe Brier is relishing the chance to take on some of the best 400 meters in the world  this weekend.

The Swansea Harrier will face the likes of three-time world indoor 400m champion Pavel Maslák at the European Indoor Athletics Championships in Poland.

A big new personal best of 46.81 at the Great Britain team trials in Manchester last month clinched Brier’s place on the plane to Torun for the championships, which begin on Friday.

Talking to Dai Sport following his selection, an excited Brier said: “It’s only just sunk in!

“All night Sunday and all day Monday I was just buzzing and then it hit me that I’ve actually got to go out there and race some of the best guys not only in Europe but in the world as well!

“You’ve got a guy from the Czech Republic called Pavel Maslák, he’s a three-time world champion, three- time European champion and he’s down to run. So yeah, it should be good fun.”

Despite the calibre of opposition he will face, the Cardiff Metropolitan University student says: “I am more excited to race them than I am nervous to race them.

“I’ve been watching these guys since I was 10-years-old at the Olympics, at the European Championships, the World Championships and now I have been given the opportunity to race them and I just can’t wait to do it.”

“On the performance side I want to see how far I can get. There are going to be some of the fastest guys about at the moment, you’ve got world championships and European championships winners in there.

“I’d like to make the semi-finals and maybe, if all goes well in the semi-final and I run pretty quick, then scrape my way into the final.”

Brier hopes the European Indoor Championships will just be the beginning of what could potentially be a huge year.

“For this season, there is still the European Under-23 championships in Norway, that’s my goal.

“I would like to medal there if not win it, but then I’ve sort of got Tokyo in the back of my mind as well. I’d love to be part of the relay set-up there.”

Many of Brier’s goals for the rest of the season will, of course, be dependent on the Covid-19 situation, which has caused so much disruption to the global athletics calendar.

Despite his delight at qualifying for the European Indoor Championships, Brier is acutely aware of the plight of many Welsh athletes, who haven’t been able to compete, or even train properly, so far this season.

At the time of the British indoor trials, which were hastily arranged to replace the cancelled British Indoor Championships, Brier was one of only 26 elite Welsh athletes given special dispensation to access approved training facilities and to compete.

Brier said: “I’ve actually been one of the lucky ones, over the past few months, anyway. I’ve had this elite dispensation to train at the National Indoor Athletics Centre, so it hasn’t changed much for me, really.

“It’s just a shame for the other athletes that they haven’t been able to train properly. I felt bad that I was able to travel three-and-a-half hours up to Manchester, race over a weekend and then come back again.

“Some athletes can’t even get on a track at the moment and they’re still running on grass and stuff like that.

“I assume that just being able to run on a track is doing something right for me.”

One of those athletes who was not so lucky was Brier’s sister Hannah – an international sprinter in her own right.

Due to the Welsh Government’s restrictions, Hannah was not able to train because she was on a lower level of funding.

Brier said: “I’ve had first-hand knowledge of what’s been going on because my sister has had issues with it and everything.

“You wouldn’t have thought that someone who has been to a Commonwealth Games, world juniors, European juniors and European under-23 championships wouldn’t be considered as elite in Wales. But it’s just down to the funding system.

“It’s a shame. I feel there could be a massive drop off in the sport and we’ll only notice it come the summer months.”

Last week, Hannah became one of 24 athletes on Welsh Athletics’ “futures programme” who have been added to the group of elite athletes allowed to train at approved facilities.

Brier hopes his appearance at the European Championships alongside fellow Welsh athletes Owen Smith and Piers Copeland, will encourage the powers that be to open up that dispensation further.

“It’s fantastic that all three of us have got the opportunity to go,” says the former Ysgol Gyfun Ystalyfera pupil.

“Hopefully the Government will see that as a message that if we do let more athletes have access to the track then we can get more athletes at the championships and not just three of us.

“Hopefully, in the next two to three weeks they’ll be able to get back on tracks and things will start relaxing for all other athletes in Wales.”

Brier is particularly pleased to have training partner and fellow Welsh speaker Smith, who has been selected for the 4×400 relay squad, alongside him in Poland.

Brier adds: “I’ve trained with Owen for around three-and-a-half years and I’m really good mates with him. He’s just got a little bit more experience than I have so it’s really good to have him there.

“Matt’s a great coach from 60m, hurdles, 100 metres, two hundreds, four hundreds, he also coaches a few 800m runners as well, so he’s got a very wide range of experience.

“He’s got so much experience of 400 metre running. He ran some great four by four legs and he’s applied that knowledge to both myself and Owen.

“Me and Owen just really work well off each other. He’s really, really strong, he’s on the strong side of 400m running. He can hold his pace for a very long time. I’m different, I’m more speed side. I can run faster and just rely on my speed for most of it.”

Cardiff Athletics sprinter Smith is also full of praise for coach Elias and how he has kept his athletes motivated through the pandemic crisis.

“It’s tough because from a selfish perspective I’m grateful I’m on the track but we’ve got guys in the training group who can’t use the track,” says Smith.

“Me and Joe had a really strong group around us with other 400 boys, one from Guernsey, one from Oxford and an 800 runner from the Isle of Man.

“But the group has just been blown apart by all of this because they have all had to go back home. Luckily, we both have the dispensation so we’ve been able to train together as much as possible.

“For us, we’ve tried to make it work. This is a result of the hard work and perseverance we’ve had to put in behind the scenes.

“A lot of credit has to go to Matt as a coach as well. Motivation levels have not been the easiest. There are days when you get in from work and you know you’ve got to lift in the garden because you can’t get to the gym.

“You get home and you just go, ‘I’m not really feeling it’ but Matt has managed this whole situation as well as anyone could.

“He’s managed to keep everyone engaged, even the guys who aren’t on the track, so it’s credit to the hard work that he’s put in behind the scenes as well.

“Me and Joe are the ones that get all the plaudits but a lot of credit has to go to Matt for all the work he’s put in behind the scenes for us.”

One thought on “Joe Brier . . . From Ystalyfera To Poland, But With Tokyo On His Mind”