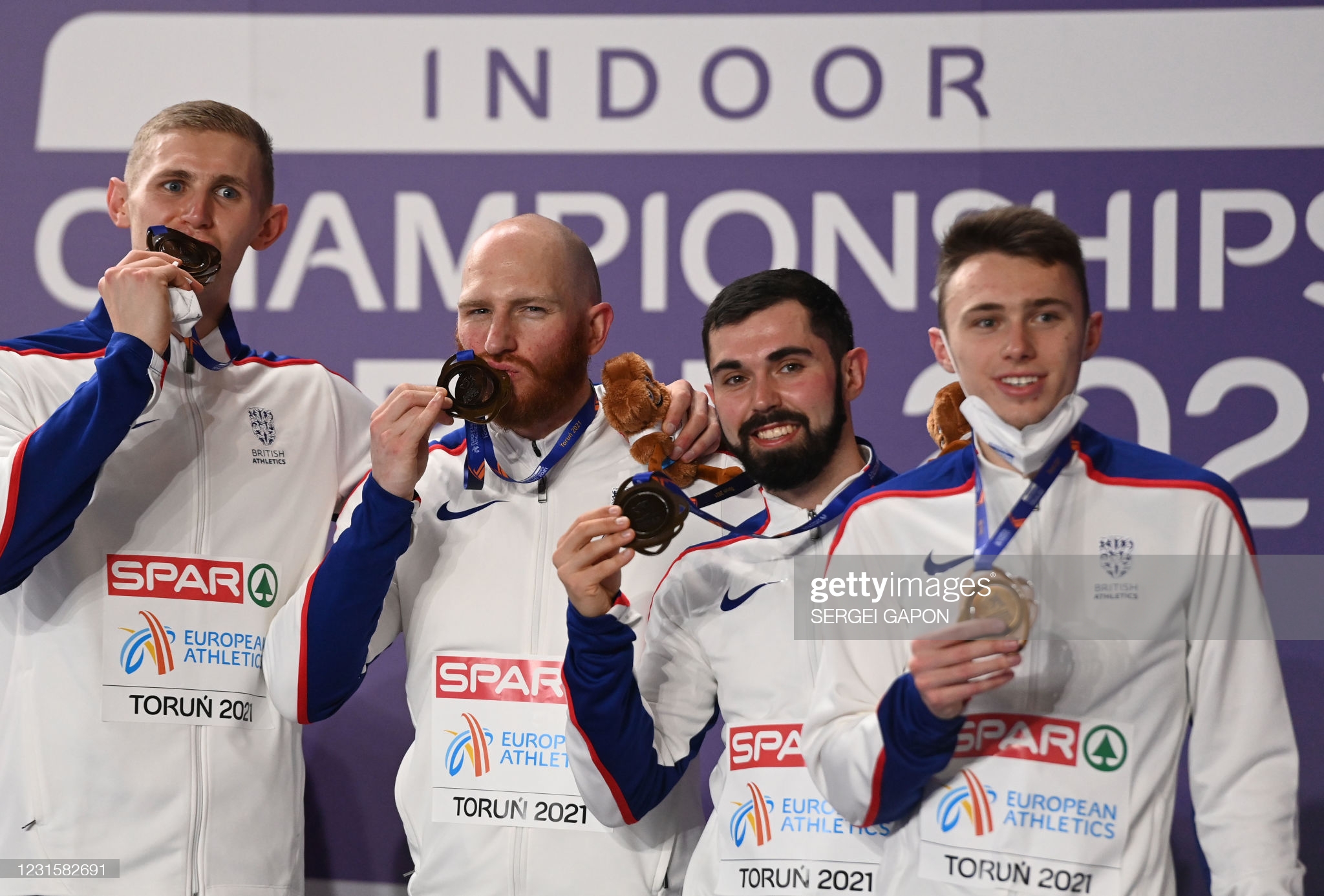 Training partners Joe Brier and Owen Smith blasted Great Britain’s 4x400m team on their way to a brilliant bronze medal at the European Indoor Championships in Poland on Sunday evening.

The Welsh speakers, who train in Cardiff under former Wales and Great Britain 400m international Matt Elias, produced excellent first and second legs to set up a thrilling medal winning performance in Torun.

The race was won by red hot favourites the Netherlands in a blistering European lead time of 3:06.06, ahead of an experienced Czech team.

Britain finishing a superb third in 3:06.70, ahead of a Belgian team featuring the famous Borlèe brothers trio – serial medallists at major championships.

Swansea Harrier Brier was entrusted with leading off the GB challenge and produced a solid leg of 47.4 to hand over to close friend Smith in fourth place.

The Deeside man, who now runs for Cardiff Athletics, was up against the likes of three-time indoor 400m world champion Pavel Maslak and lifted Britain up to third place with a 47.0 leg before handing over to James Williams.

The Liverpool man ran an excellent leg to put GB well in contention for a medal and Lee Thompson, of Sheffield and Dearne, brought the team home for a memorable and well-earned bronze medal – Britain’s first in the men’s 4x400m at this event since 2013.

Speaking after the race, a delighted Brier said: “I just had so much adrenaline going into the race.

“I know I’m quick and I ran a quick 200 metres, so I thought that I would use my speed to my advantage and get us out hard and into a good position at the bell and hold it so I could pass onto the boys for a cracking leg.”

The Cardiff Metropolitan University man added: “At the end of the day, we’ve done more than enough to be here. We’re here to represent our country and we’re as good as the guys on the start line, so I just loved every minute of it.

For Smith, Sunday night was the chance to put past disappointments at the European Indoor Championships behind him.

Having missed out on the relay due to illness in 2019, Smith had told Dai Sport last week that he had unfinished business in a GB vest.

The former Ysgol Maes Garmon pupil said afterwards: “That was interesting. I had to use a lot of experience and spatial awareness because it wasn’t the easiest leg to get around people.

“The Italian in that second lap tied up quite quickly and I ran into the back of him the first time I tried to get past him, so I thought that I would bide my time.

“We’ve been working on changeovers me and James [Williams] about stretching it and making it as quick as possible and the way that he [the Italian] was dying, I knew that I could get past him.

“Having Jonathan Borlèe up my backside is a little bit of a reason to keep going.

“He kept hitting me with his arm as he was running, but in those positions, you’ve got to stay calm and collected because in an individual event, there’s nothing on the line except for your own pride, whereas I wanted to give these boys the best opportunity of a medal and if that meant biding my time to do it, then so be it.

“I’m over the moon. Coming away with my training partners and my best mates and joining up with these two boys that I’ve grown up running with, we’ve essentially become a family over the past few days.

“So it’s just been incredible and I couldn’t have asked to do it with a better bunch of lads and Efe [Okoro] and Tom [Somers] have been a great part of that as well even though they weren’t on track with us today.”

The team’s bronze medal helped Great Britain equal their record of 12 medals at a European Indoor Championships, set in Glasgow two years ago.