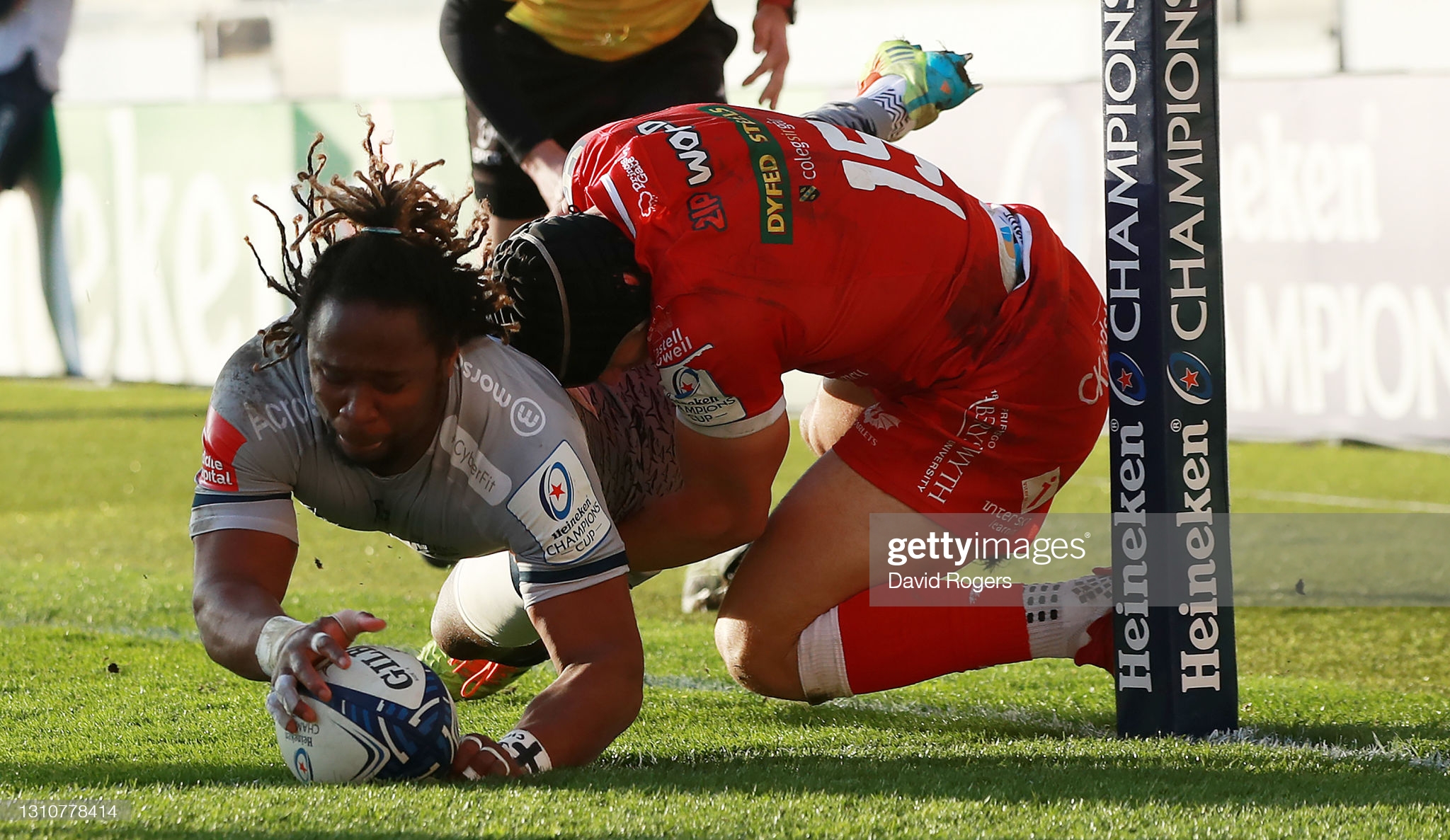 Marland Yarde of Sale Sharks dives over despite being challenged by Leigh Halfpenny. Pic: Getty Images.

As all four regions exited in Europe in varying degrees of disarray, it was left to Sale director of rugby Alex Sanderson to try and raise some Welsh morale.

After the Scarlets had followed the Ospreys, Dragons and Cardiff Blues in losing at the re-jigged last 16 stages of both European tournaments, Sanderson tried to put a positive spin on a bleak picture.

After the Blues, the Dragons and then the Ospreys had all lost in the European Challenge Cup, the Scarlets were humiliated in the Heineken Champions Cup when they were thrashed 57-14 at home to Sale.

Sale will play La Rochelle in the quarter-finals and Sanderson said: “Scarlets are better than that.

“We caught them cold and we were red hot. We would have taken any win down here at this stage of the competition, but everything seemed to click.

“We felt a good performance was coming, but that was a level up. It was exactly where we want to be, but next week will be a different challenge as La Rochelle have some big boys.

“They are a very good side, they pride themselves on our physicality like we do, and we will have to handle their brilliant ball players and Galactico stars.”

Scarlets and Wales hooker Ken Owens lifted the Six Nations title last Saturday, but a week on it was an altogether different story after a humbling defeat.

“We have had a hiding and we can’t shy away from that,” Owens said. “Nothing went right. Rugby is a simple game and we didn’t match Sale’s physicality. We made back-to-back errors.

“We played into their hands and got dominated physically. We didn’t deal with it at all.”

The Scarlets had promised a tilt at the late stages of the competition but fell short in an embarrassingly one-sided clash.

Sale were very good; physically dominant, ruthless in their execution and in AJ MacGinty they had a playmaker who ended the game with 32 points of his own. Scarlets, by contrast, were shocking.

There must be an immediate Welsh rugby inquest into how the country’s four regions are so far away from challenging Europe’s elite when their national side are consistent winners in the Six Nations.

Wales claimed the 2021 title last month, but the domestic game is sliding towards irrelevance as far as trophies – or even challenging for them – is concerned.

Looking at my TL this morning looks pretty unambiguous that Scarlets fans want GD gone. Not sure moving him upstairs is the solution either. But brining in experience to the coaching setup is definitely needed.

There were four Anglo-Welsh club games this weekend with three in the second tier Challenge Cup to go with Sale’s visit to Llanelli.

All four were won by English sides with Sale’s victory the most emphatic of the lot.

“We made so many unforced errors in the first half and once momentum and their power game took hold, it went all Sale’s way,” said Scarlets head coach Glenn Delaney.

“It was a big occasion, but unfortunately we made mistakes. This is not where the four Welsh sides want to be and it’s been a poor weekend.”

There were 605 international caps in the Scarlets squad while Sale boasted just 166, but the Welsh side got off to a nightmare start. It did not improve one jot from the first minute to last.

Sione Kalamafoni dropped the kick-off and a scrum penalty followed.

MacGinty kicked the goal and Scarlets were indebted to some neat breakdown work by Jac Morgan for stopping Sale building on their dominant start. Scarlets were camped inside their own half.

A J MACGINITY THE MAGICIAN 🤩🎩

The gift that keeps on giving, excellent change of direction to find a bit of space and expose the narrow Scarlets deffence.

Beaumont more than happy to receive the pass for the line. ☺️#HeinekenChampionsCup pic.twitter.com/BZBcWsM99i

Fly-half Dan Jones was guilty of overplaying as he tried to break the shackles, but a Sale try soon arrived from another home mistake. Inside their own 22, Owens’ line-out went all wrong, but it was the jumpers more than the hooker who were at fault as no player in red got off the ground.

Sale hooker Akker Van der Merwe made the most of the mistake to power over and MacGinty nailed the kick to make it 10-0. Van der Merwe used Wales scrum-half Gareth Davies as a speed bump on the way to the line, but he was never going to be stopped.

Scarlets were all at sea. The normally reliable Leigh Halfpenny dropped a high ball, Jones was penalised, and only fine Liam Williams work stopped another Sale try.

There seemed to be a real lethargy about the Welsh side which was inexplicable for a knock-out Champions Cup game and it was summed up by a poor team chase of a Jones kick.

Sale, by contrast, were right at the races. Their back-row, including England’s Tom Curry, was relentlessly physical. MacGinty kicked three more points before another away try arrived.

First, Faf de Klerk chipped through, but Rohan Janse van Rensburg failed to get downward pressure. It mattered little as Van der Merwe was immediately driven over for his second.

MacGinty’s kick made it 20-0 and effectively ended the game as a contest. To make matters worse for the hosts, they also lost centre Johnny Williams to a nasty shoulder injury.

MacGinty kicked another penalty. It was so one sided it reminded you of school rugby when the bigger sides score almost at will.

One of the saddest nights in Scarlets illustrious history . A team of over 600 International caps , looked as they had met in the car park .What we do in training is anyone’s guess?? Box kick and aimless kicking . Poorly coached with or without the ball .Ageing injury prone squad

Scarlets did make their first foray into the Sale 22 and even though Owens smashed into the far smaller De Klerk, the ball was held up over the line.

Sale scored a third try right at the start of the second half. Jones threw a simply appalling pass in midfield, MacGinty hacked on, and scored next to the posts. He converted too.

Jones was replaced almost immediately. Jake Ball escaped a card for charging into De Klerk and Owens did get driven over, but the try was already nothing more than a consolation.

Marland Yarde dived over for Sale’s fourth, MacGinty converted, and both teams unloaded their benches knowing the result had long since been decided.

The outstanding De Klerk – who had been given an armchair ride by his pack – was replaced by the highly rated young scrum-half Raffi Quirke.

He immediately saw his captain Josh Beaumont cross for a fifth Sale try. Beaumont had the freedom of Parc y Scarlets to score. Where was the Welsh defence? One can only wonder.

Morgan did get one back, but Quirke responded immediately. It summed up the feeling that Sale scored whenever they fancied it. On this form they could be Champions Cup dark horses.