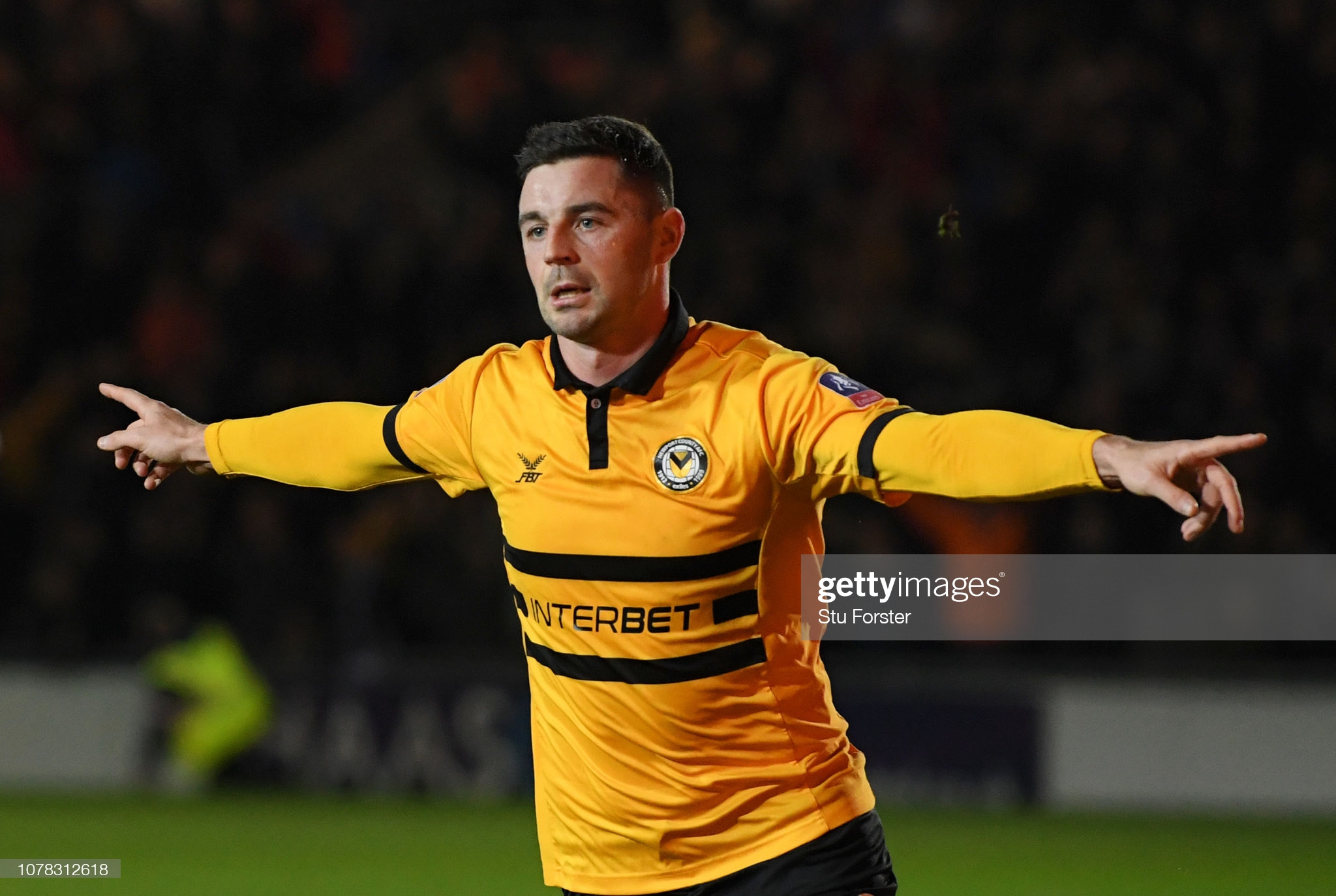 Padraig Amond can enter the Irish record books ths evening, but in many ways he already knows this has been the most productive season of his life.

Amond will be in the Newport County side that host Premier League Brighton at Rodney Parade in the third round of the FA Cup.

The Irishman already feels he’s been blessed during lockdown, but another FA Cup goal would make him an Irish record-breaker.

If the County striker and crowd favourite scores then he will become the leading Irish scorer in the history of the competition with 13 goals.

That would take him past Robbie Keane and Jonathan Walters and provide more reasons to celebrate following the birth of baby son Eòghan, a first-born for Amond and his wife Caoimhe at the start of the season.

“A lot of people have had very bad lockdowns for all kinds of reasons, but I’ve been lucky and had a very good one because we’ve had our first child and it’s been an incredibly exciting time for us,” says Amond.

“There’s a lot of unfortunate things happening in the world right now, but thankfully we’ve all been healthy and the last four months since he was born have just been unbelievably special.

“With restrictions over training, you can’t do any extra work these days. You do the session and go straight home, so that’s given me so much time to spend as a new family and I’ve loved it.

“The only down side is that our families back in Ireland haven’t been able to meet our son yet, but that’s not a big deal in the grand scheme of things.”

Amond loves the FA Cup and the old tournament seems to have a soft spot for the 32-year-old, too – providing him with so many career highlights.

There was his goal against Tottenham in 2018, another that knocked Leicester City out of the competition a year later, followed by a beauty that did for Middlesbrough.

Manchester City eventually stopped County’s march just before the 2019 quarter-finals, but not before Amond again cracked home a sweetly-timed half-volley in the 4-1 defeat to Pep Guardiola’s men.

Last season, he was just as prolific – scoring twice against Grimsby and another against Maldon and Tiptree, before Newport lost at Millwall.

He was back in the old routine this season with another goal in Newport’s 3-0 win over Salford in the last round and reckons the secret is in his relaxed approach.

“For a club like Newport, the FA Cup is always a free hit. The pressure of league points is off and you can just go out and express yourself.

“It’s a chance to score goals that get remembered, too, because not so many of our games in League Two are on TV.”

With their Cup pedigree now complemented this season by a long stint at the top of League Two before they slipped behind Carlisle, it was hardly a surprise the TV companies were lining up to show County once they drew another Premier League club.

“It’s a tie that has upset potential because we’re at home and other clubs don’t really like the tightness of Rodney Parade, or perhaps enjoy our pitch which isn’t one the bigger clubs are used to,” says Amond.

“But Brighton are a high quality team with some excellent players, so we will have to be at our very best to compete.

“But, hey, why not? It’s the FA Cup and I always feel I can score in every game I play.”

A trip to Rodney Parade and a pitch which is likely to be a great leveller having been under a protective dome ahead of Dragons’ Guinness PRO14 rugby match against Ospreys late on Saturday afternoon is not exactly a dream tie for any top-flight club looking to avoid an early FA Cup exit.

Potter, though, will take things as they come, with Brighton getting a break from their Premier League survival battle.

“That is the magic of the cup. You have to play the tie you are given and this is the tie we have got,” the Brighton boss said.

“Mike Flynn has done a fantastic job there since he took over and you look where they are now.

Potter will hope the highlights of Sunday’s third-round tie are not set to join the archive of great FA Cup shocks.

“Ronnie Radford scored that goal (for Hereford against Newcastle in 1972) when he smashed it in from about 50-yards with no grass anywhere, but that’s part of what you have to deal with, so we will get on with it as best as we can,” the Brighton boss said.

“I am sure promotion will be the aim for Newport this year, but at the same time I am sure they will use an FA Cup run to improve that.

“We need to try and stop that – hopefully they will just be celebrating a promotion rather than a cup run.”

South Africa striker Percy Tau could made his long-awaited debut on Sunday.

Brighton have been able to recall the 26-year-old, signed during 2018, from an extended loan spell in Belgium after getting Government approval to secure a work permit following the end of the Brexit transition period with the European Union.

Potter is expected to utilise his squad ahead of crunch Premier League games at Manchester City and Leeds.

“We want to win the game against Newport, we want to go through, so it’s important we have that mentality and that approach,” the Brighton boss said.

“Then we have got a big week in terms of three matches in six days, so we have to be conscious of that.

“But we have to focus on Newport and take that game first, we will play a team that we think gives us the best chance to win.”