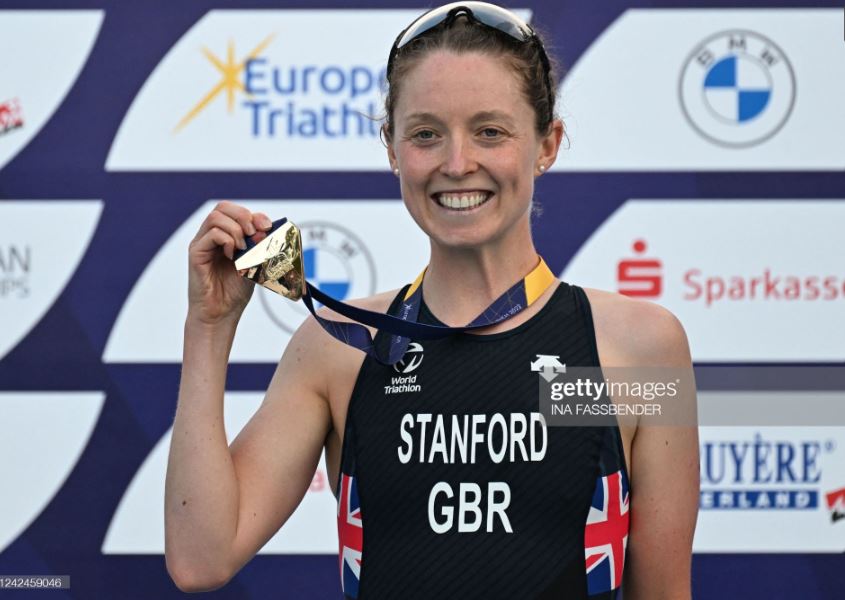 Non Stanford has admitted she surprised herself when she brought the curtain down on her brilliant international triathlon career by becoming European champion.

Wales’ biggest name in the sport went out in a blaze of glory at the weekend, by finishing first at Munich’s multi-sports European Championships.

A full nine years since she became world champion back in 2013, the 33-year-old from Swansea rolled back the years in her final major competition – just a fortnight after she helped Wales win silver at the Commonwealth Games in the mixed triathlon relay.

“This is actually my last ever World Triathlon race as I’m retiring this year.

“2011 was the first time I represented Great Britain at a European Championships so it’s quite fitting that this is the last time I will ever represent Great Britain.

“To come away with gold is absolutely beyond my expectations.

“I had a terrible second transition, something was wrong with my bike and I got really far behind and I thought I’d just have to stick to my own pace here because it’s such a hard run course.

“I just gradually found myself moving through the pack and next thing you know I was at the front. It was quite unexpected.”

Stanford – who has recovered from a serious knee injury – was seven seconds down on the leaders at the end of lap one of the final run, before surging back for a brilliant victory.

The German course must have felt like home for evergreen Stanford, who delivered a dazzling display to clock a time of 1:52:10 and beat German home favourite Laura Lindemann by nine seconds in her last race in a GB vest.

It was all about Stanford in Munich, however, who continued the momentum after her mixed team Commonwealth Games silver for Wales in Birmingham to soar to the top of the podium and cap a memorable career.

Stanford’s enthusiasm is infectious and Great Britain youngster Iona Miller admits she couldn’t be happier for one of the mother figures of the British team.

Everyone does not get to finish their career’s on top in the same epic fashion of @NonStanford A big career ending win yesterday for one of the hardest working athletes I know. So pleased after injuries & setbacks in her great career, she could end on such a high note. pic.twitter.com/BnBuDQUuxS

The Scottish triathlon star, 23, came home 36th out of the 41 athletes to finish.

Miller said: “Non is absolutely amazing. I’m just so happy for her.

“I saw her on the screen when I was coming through – her in first place, and that really spurred me on a bit.”