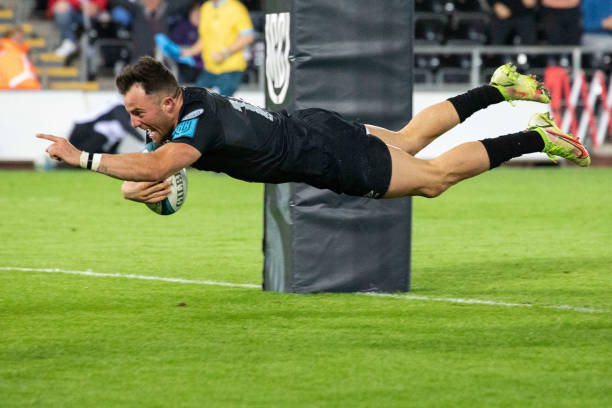 Luke Morgan in action for the Ospreys. Pic: Getty Images.

The Ospreys have secured the Welsh Shield and qualified for the Heineken Champions’ Cup, following a pulsating final weekend of United Rugby Championship action.

They went into the weekend needing to equal or better the Scarlets’ upcoming result to confirm their European qualification and top spot in the Welsh shield.

The weekend got off to a dramatic start when Ospreys hosted the Blue Bulls at the Liberty Stadium in Swansea. Trailing 38-17 with just three minutes left on the clock, Toby Booth’s side looked downhearted as they appeared to have blown their chance.

But late tries from Sam Parry and the ever-impressive Luke Morgan secured 2 precious points for the Ospreys in the dying embers of the game, which meant that the Scarlets effectively had to beat the Stormers in Llanelli the following day to steal victory from the Ospreys.

The Welsh region can still achieve Champions Cup qualification if the Scarlets fail to secure three points in their match against Stormers today 🏉 pic.twitter.com/HnmLHTrBKQ

While the Ospreys’ hopes were lying in the balance following an excellent performance from the Turks, it was not meant to be for the Scarlets as a late try from Ruhan Nel secured the game and ensured the Ospreys held on to their spot in Europe.

“The team showed great character to get back into the game, but we are not happy about losing, of course not, but from where we were and what we had to come past, it’s probably a game that reflected a lot of our season.

“I’m just really proud of the character of the players. I think that the effort was made, they never backed down even when we thought we were probably not getting the rub of the green.

Here’s how the Standings look after the final round 👀

“We’ve got to be better… be competitive more when we’re not on the right side of the result and get within seven, and convert those three tries into four.”

The Ospreys have seen gradual improvement in their playing style under Booth, and the former London Irish and Bath coach is looking to continue to evolve his Ospreys side. Although they finished top of the Welsh Shield this year, they still have some way to go if they are to compete with the top side in the URC.

“We’re very clear on what we have to do, and hopefully we can continue to improve. But any improvement is always based around the attitude of your players and their want to do it for each other, themselves, the region and the people that it reflects,” said Booth.

He explained that qualification is not how he and his players will measure their success this season, pointing out that his team have played strongly “against the top opposition on the league table”.

Booth has worked wonders at the Ospreys since arriving in Swansea in 2020 and the team has come a long way under his tenure. It is a testament to his hard work as well as the work going on in the background that the Ospreys are now back in full form as the best team in Wales.

“This is the end of my second season, and we’ve come through pretty choppy waters over the two seasons,” explained Booth.

“We’ll take time to reflect and I’m much clearer now about who can do, what and where that takes us, and what we are aspiring to become.”

Speedster Luke Morgan put on an admirable display on Friday night, securing two crucial points for the Ospreys when he scored a bonus point try in the 79th minute, confirming Champions Cup qualification and local bragging rights in the URC.

Jac Morgan also put in a huge performance following what would have been a disappointing week for the Brynamman prospect, who was left out of Wayne Pivac’s Wales squad to tour South Africa.

Which winner deserves their spot on our Twitter header?#URC pic.twitter.com/rgMhfpSWU0

Booth said: “We always talk as a team about being ready and Luke Morgan epitomizes that; he’s always ready and he’ll always put his hand up and he did brilliantly for us tonight”.

“Jac Morgan put the disappointment of this week to the back of his mind for today. I thought he was putting in the shift again, he’s done it all year round, he’s been one of our standout players.

“Obviously, it’s his first season here and he’ll get better with age and develop here in this program that has produced and is still producing international rugby players.

“We’re providing a third of the squad to South Africa so we’re doing things right and we’ll try and get all of those boys and the next cabs off the rank as far up the chain as we can. That reflects well on the program and the environment we’ve got.”