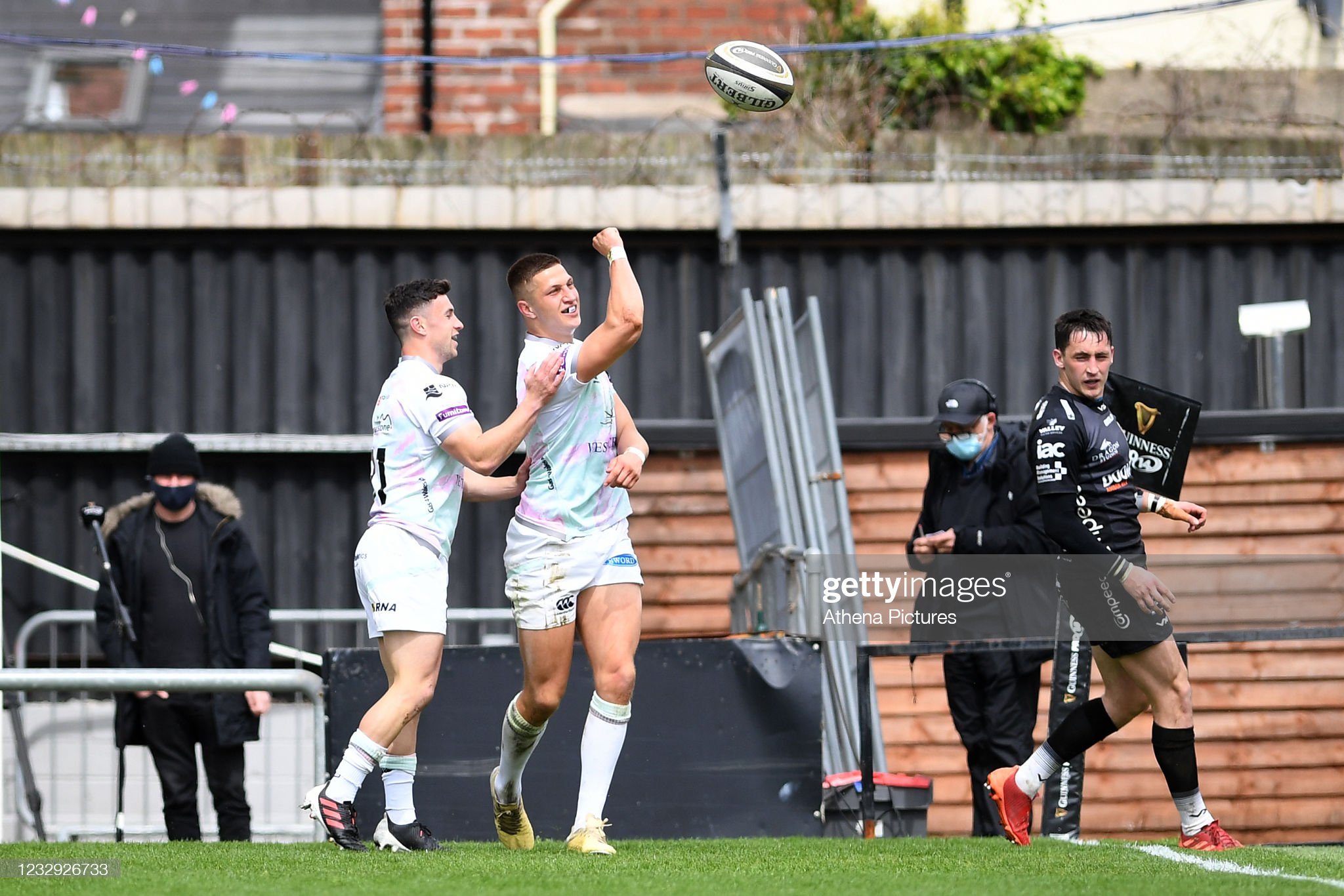 NEWPORT, WALES - MAY 16: Max Nagy of Ospreys celebrates scoring his sides sixth try during the Guinness Rainbow Cup match between the Dragons Rugby and Ospreys at Rodney Parade on May 16, 2021 in Newport, Wales. (Photo by Athena Pictures/Getty Images)

Max Nagy admits he takes plenty of stick from fellow Ospreys George North and Stephen Myler, but at least they no longer look down on him.

At 6ft 4in, the rangy full back is the same height as North and five inches taller than Myler, his teammates at the region.

But prior to re-uniting this season, Nagy was just a small kid seeking autographs at Flanklin’s Gardens when the three of them were last together.

That was eight years ago, when Wales wing North, 30, was powering down the wing for the Saints and Myler – still going strong at 37 – was pulling the strings at outside-half.

On Saturday evening, Nagy is set to face Cardiff in the United Rugby Championship Welsh derby at the Arms Park, a return fixture to the one in which he made his regional debut and a match that is live on S4C.

Nagy was a 16-year-old, hoping to make the grade with the Northampton academy when he was told he was being let go since he was probably too small to ever make it as professional rugby player.

“I was a fly-half back then,” says Buckingham-born Nagy, who recovered from four months out with an elbow injury to make a try-scoring return in South Africa against the Stormers.

“They thought my size was an issue. I was a bit of a late developer and wasn’t as big as some of the other academy boys.

Northampton’s loss has proven to be the Ospreys’ gain with the former Swansea University student offering a valuable selection option at either 15 or on the wing.

As it happens, Nagy holds no grudges towards the club he supported as a boy and the only painful reminders are when Myler and North rib him over his autograph-hunting days a decade ago.

“Steve was there when I watched him as a child with my family. George North was there, too. So, it’s a bit surreal now playing with them.

“But it’s a great opportunity for me to learn off someone like Stephen and all the qualities he possesses. I just about remember Carlos Spencer and then Steve came in and helped Saints win the Premiership.

“He didn’t have a clue who I was when I came to Ospreys and there was no reason why he should. I told him I was from Northampton and our friendship blossomed from there.

“He always makes jokes about me watching him as a young kid and getting my shirt signed. But to be still playing at his age at the level he is, takes something very special. He just comes back season after season and maintains such a high level.

“He gives me so much advice. The best has been to not worry about external factors and just go out and play your own game. Don’t get nervous by worrying about things you can’t control.

“Dan Evans has also been great for me as we play in the same position. He helps me with a lot of positional stuff.”

Nagy built himself up – literally – during gym sessions at Swansea University and having got into the first team in his fresher’s year he helped the college to promotion into the BUCS Super Rugby division.

It was the same springboard that opponents he met along the way – such as Alex Dombrandt and Luke Northmore – have used to propel themselves into the England squad.

“You get exposed to live streamed games and it’s very professional. It’s a really good breeding ground for young players coming through.

“We have seen it with Fitz Harding at Bristol Bears, Luke Northmore at Harlequins and Alex Dombrandt. The list goes on.

“It’s a great opportunity for any young player to make a different route into the pro game and it’s only going to get better as more money gets pumped into it and standards rise every season.

“When you get released by a club, it’s gutting. But at the end of the day, you are not going to become a professional rugby player overnight.

“I went away and went back to basics – rediscovering why I enjoyed playing the game and trying to build on that game.

🔵⚫️ Here is the Cardiff side who will welcome @ospreys to @ArmsParkCardiff for the first time since 2013.

“I went back to my local club, Buckingham, and started enjoying myself. I had a year out in New Zealand, playing U21 rugby which was also a fantastic experience.

“Then came the chance with Swansea University. It’s all helped.”

Thanks to the BUCS Super Rugby standards, Nagy’s ascent to the URC has not been as steep as some might have imagined.

“I have felt at home playing at this level. It’s a big step up from university rugby but I have felt I can hold my own.

Here is your Ospreys team to face @Cardiff_Rugby at the Cardiff Arms Park on Saturday evening in the @URCOfficial, K.O 5:15pm pic.twitter.com/moaYU1d6sD

“Results have not gone our way recently. But we feel we are building towards something special and the Welsh derbies are a chance for us to show everyone in Wales what we’re about.

“It’s an added bonus for me because my first start was against Cardiff at home. So, it’s a special fixture for me and I’m looking forward to getting stuck in.”

Live coverage of the United Rugby Championship match between Cardiff and the Ospreys. English commentary available.