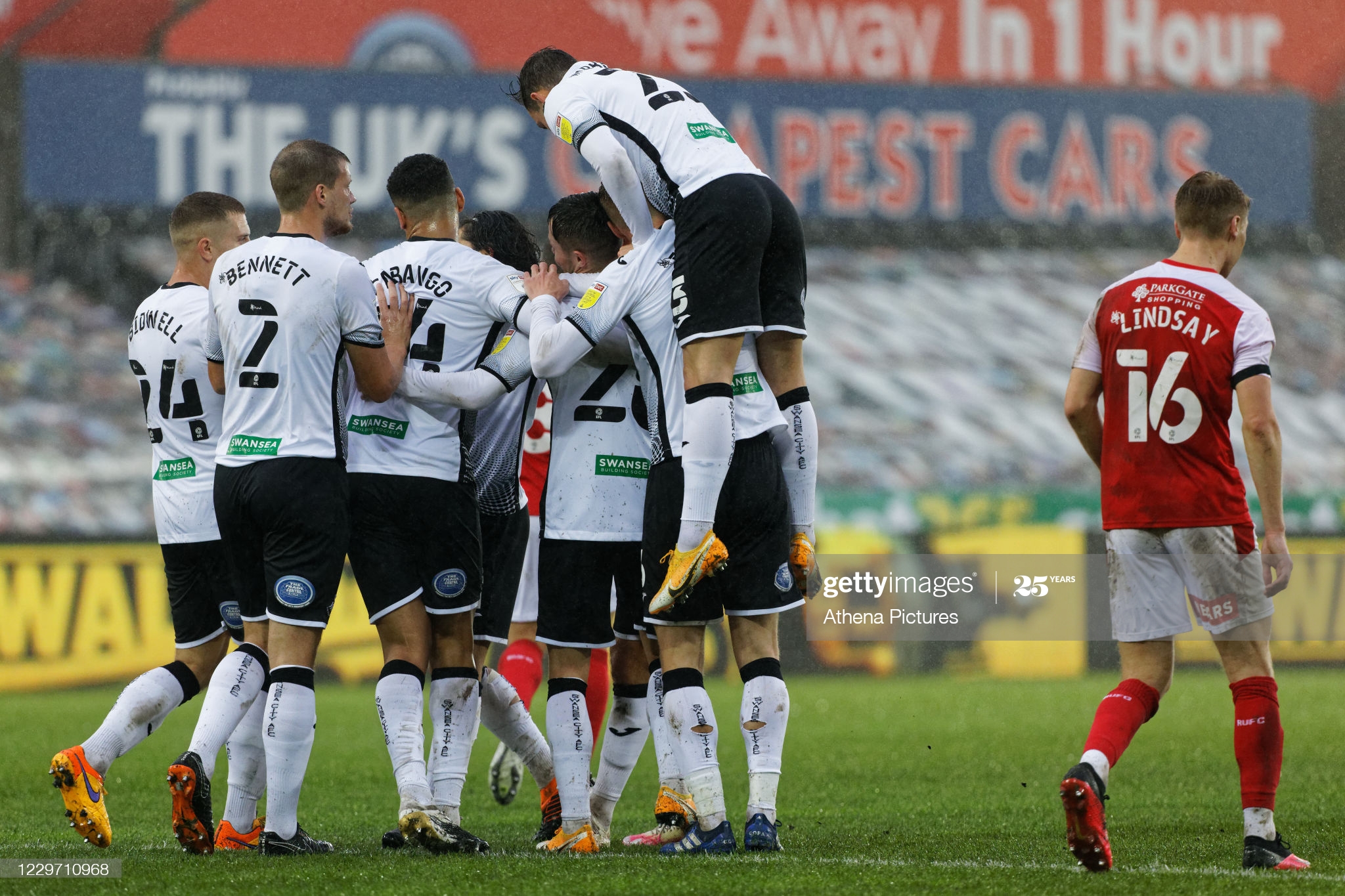 Steve Cooper admitted Swansea City had scraped and scuffed their way to a messy 1-0 at home to Rotherham but was still ecstatic.

It takes all sorts – and all types of victories – to assemble a promotion-winning season and the Swans manager was quick to suggest this was the type of win that may have eluded his team in the past.

After all, it had been three years since Swansea had last won in their return game back after an international break.

The hosts dominated for large spells but had to dig in and fight to clinch three points after Rotherham rallied late on.

Captain Matt Grimes scored his first goal from open play for five years in the 27th minute when he fired a half-volley from the edge of the box that scrambling goalkeeper Jamal Blackman failed to keep out.

But Swansea were forced to hold on and could have conceded a penalty in the final minutes when Ryan Bennett looked to have committed a handball on his own goal-line after Michael Smith headed Kyle Vassell’s cross towards goal. But their protests were waved away by referee Matthew Donohue.

And Cooper was delighted with his team’s determination to secure three points.

“I am really happy with it, it was a hard-fought game,” said Cooper. “We created some really good chances that we could and should have done better with.

“We scored a scruffy goal to be fair and to show the other side of the game in the second half, showing resilience and character and dealing with the set-pieces and having the kitchen sink thrown at us, I’m really happy with that.

“It is the games and the days like this that could be really important. I am not saying we wouldn’t have won this game last year, but there were games like this we didn’t win.

A snapshot of this afternoon’s victory…

With Andre Ayew among the injured and absent, Cooper gave a rare starting opportunity to Liam Cullen, who began only his second Championship match.

“Liam Cullen deserved his opportunity and did really well. The icing on the cake would have been a goal… but I was pleased with how he handled the level, he didn’t look like a boy.

“We are missing players unfortunately through no fault of our own… but we showed a lot of character and I am  really pleased with that.”

“Viktor and Jordon have tested positive for the virus,” said Cooper.

“They’re fine and there’s no symptoms. Viktor’s been on international duty with Sweden’s Under-21s, Jordon’s been in and around here.

“Both have to follow the protocols of doing the self isolation and will come back after that. But they’re both fine.

“It’s something we’re getting used to hearing, players testing positive.

“Viktor was away on international duty, so there’s not much we can do about that.

“With Jordon, you don’t know where he picked the virus up. It could be anywhere.

“We social distance as much as we can at the training ground. When I meet with the players, everyone’s got a mask on. We follow the red zone processes here at the stadium, we travel on two buses, like every other team will be doing their best to keep the virus away from the team, not just to keep players available for games, but to stay healthy.

“We are doing our best, but, to use your word, it is inevitable at times, it’s going to have an impact on squads.

“I’m sure we’ll play a team in the future that is missing players through the virus as well.”

Rotherham manager Paul Warne believes they should have been awarded a penalty, but had no complaints about the final result.

“I thought our first-half performance was lacklustre, and it just wasn’t us,” he said. “The joy of having five changes is good when things aren’t going great, and it allowed us to make a couple of changes at half-time and then tweak the system.

“We caused them more problems and on another day we might have got a penalty or a tap-in from the goalkeeper’s drop, but Swansea could have scored more as well.

“My opinion is skewed because I’ve seen the penalty incident back.

“My lads are really honest, it’s a weird one with penalties, if players don’t appeal the ref doesn’t give them.

“They all appealed which is quite unique and I was disappointed not to get it. Did we deserve it on balance of play, probably not, but you can still play badly away from home and still get a point.

“That would have been good for us to leave here with a point when the performance wasn’t up for it.”