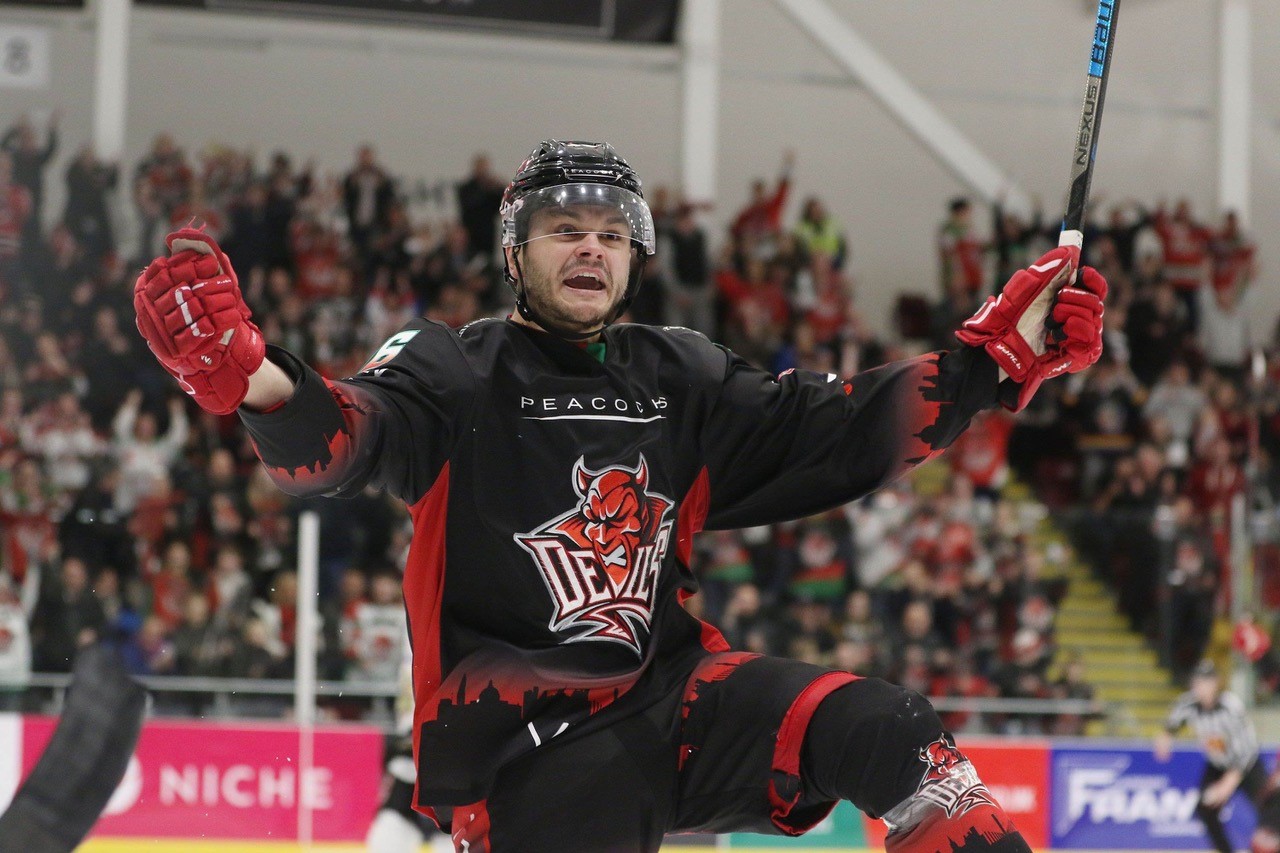 Forward Sam Duggan has committed to Cardiff Devils for the new season, which is due to start in November.

Reading-born Duggan is one of the most promising young players in Britain and Devils managing director Todd Kelman says: “Sam is only 22-years-old and is getting better and better each season. I expect a big contribution out of him in the new season.

“He is a workhorse, loves the game, and he has really benefited from being around the older guys on this team.

“When Sam joined Cardiff in 2018, we knew we were signing a great young player who has tons of potential. He has progressed even quicker than we anticipated.

“I love the way he plays – all energy every shift. He can adjust, play on any line and showed that last season.

“Sam has great speed and, as he gets stronger, he is going to develop into a top quality power forward in this league.

“As a guy, we all just love him. He is great with the fans and makes time for everyone.

“Hopefully he will be here for years to come.”

Duggan joined Cardiff after a brief stint in North America playing for Jamestown Rebels. Prior to that he played four years in Sweden with Orebro HK.

He was assistant captain in their under-20 SuperElite League, having captained Orebro HK under-18’s team for two years.

In 2017 he iced for the GB men’s team who won gold in Belfast to earn promotion to Division One A, scoring twice and adding an assist in five games he played.

Duggan played for Bracknell Stingers at under-16 level and Bracknell Drones under-18 level before moving to Sweden.

Josh Batch and Toms Rutkis have both rejoined Devils. Batch has played his entire professional career for Devils, making 2020-21 season his 10th season with the club.

He played every game for Cardiff last season, scoring twice and adding 11 assists in 65 appearances.

Batch was also selected for the GB National Team for the Olympic qualifiers in February after an impressive start to the season.

During his nine seasons with Devils, he has scored 34 goals and added 89 assists for 123 points in 590 games played. Batch can play either forward or defence, he kills penalties, blocks shots and is among the toughest players in the league.

Rutkis, aged 23, will be on a two-way contract with Swindon Wildcats, where he has played regularly for the last six years. Rutkis scored 20 goals and added 18 assists for 38 points in 42 games for Swindon in 2019-20, the most productive season of his professional career so far.

He played 20 games for the Devils last season including all six Champions League games.

Although he was born in Latvia, all of his hockey has been played in the UK, making him eligible for the Team GB programme. He has represented GB on three separate occasions, playing once for the under-18s and twice for under-20s.

“Toms has been training with us most weeks for the last few seasons and continues to get better every year,” said Kelman.

“We believe he will be a full-time EIHL player soon but the experience he is getting in Swindon is better for his development right now. He is playing in all situations for them and Swindon are a great organisation to be at.

“Toms is a great person, fits right into the culture of Cardiff Devils.  He works hard on the ice and in the gym and wants to improve every day.

“We are grateful for our ongoing partnership with the Wildcats. I feel lucky to be able to have the working relationship we have with such a solid club.