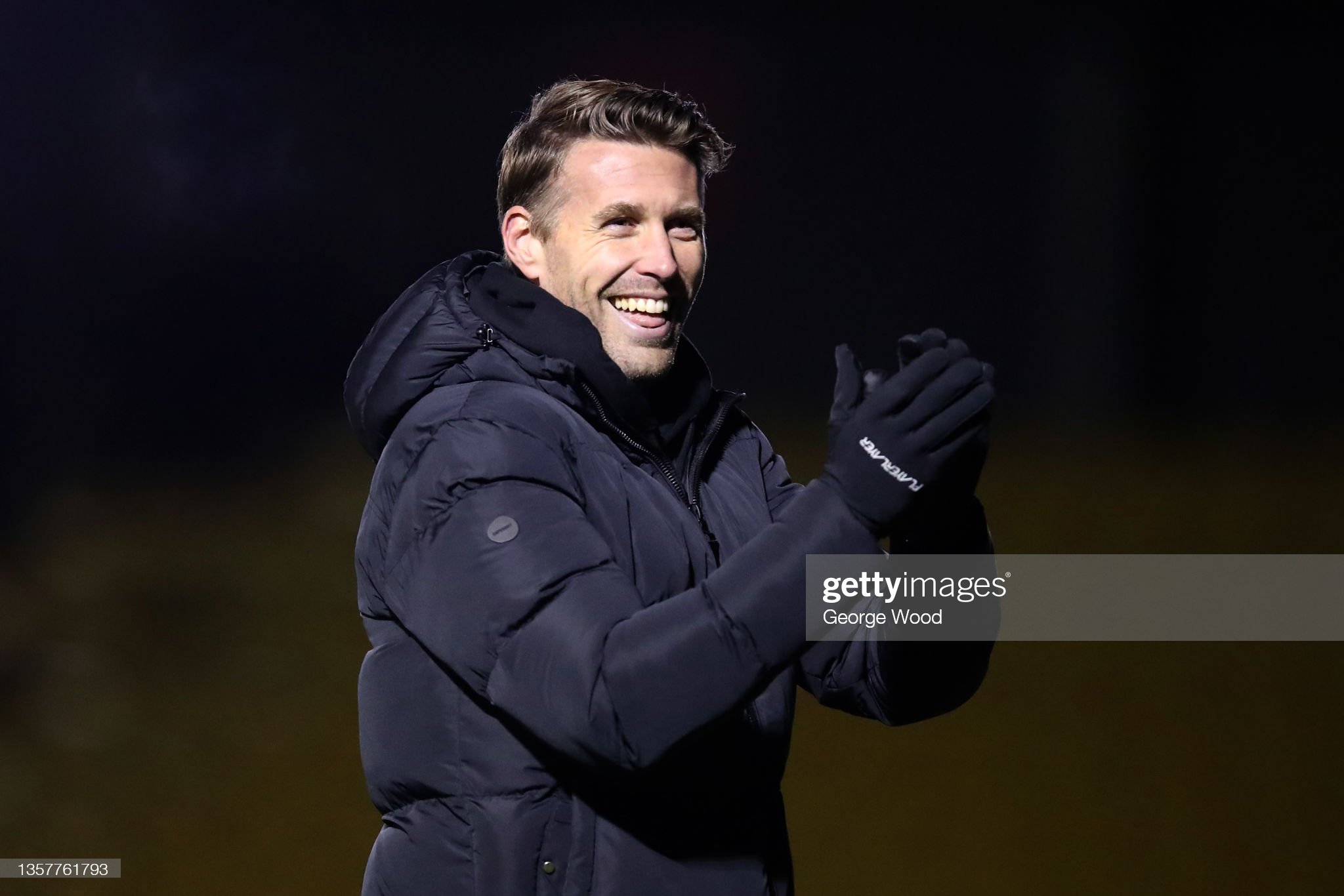 There’s a Welshman at the top of the League Two table who looks well placed to win a title and promotion. Rob Edwards pulled up few trees as an international player, though his managerial career is echoing the quiet success he achieved as a club player, as Daniel Parker reports.

While a handful of Hughes’ debutants progressed to become stars in a red jersey – Danny Gabbidon, Simon Davies, Robert Earnshaw and James Collins – the majority were international émigrés by the end of the decade.

Followers of the national team may be forgiven for forgetting the contributions of some of Sparky’s less-impactful charges; with the likes of Rhys Weston, Neil Roberts, Gareth Roberts, Darren Ward and Paul Evans largely lost in the mists of Welsh football history.

You could easily add the name Rob Edwards to that list.

Edwards, born in Shropshire to Welsh parents, won the first of his 15 Welsh caps as a substitute in Wales’ 4-0 Euro 2004 qualifier against Azerbaijan in Cardiff, a win which placed his team in pole position for a spot at the Championships in Portugal (spoiler alert – it wasn’t to be).

The Aston Villa youth player’s remaining appearances in red were largely confined to friendlies, though he did a make a handful of appearances under John Toshack in the unsuccessful Euro 2008 qualifying campaign.

Edwards had more joy at club level, making 100 appearances for Wolves; playing Premier League football at Aston Villa and Blackpool, and featuring briefly for Norwich City in their 2011 promotion season.

Since hanging up his boots in 2013, the former defender has carved out a reputation for himself in the dug-out, leading Wolves’ Under-23s to youth football’s top flight for the first time in the club’s history in 2019 before leaving the Black Country for the England Under-16s managerial post.

It was little surprise that heads would be turned in the Football League and last summer the Welshman secured the top job at Forest Green Rovers, one of British football’s most eccentric and ambitious clubs.

Rovers currently sit at the pinnacle of the League Two table, with a four-point gap between themselves and second-place Exeter City.

The Nailsworth-based side have scored nearly 70 goals this season, with prolific strike force Stevens and Matt responsible for 40 between them.

Indeed, Stevens looks to be the only player capable of catching Newport County’s diminutive goal machine Dominic Telford in the race for the divisional golden boot this term.

Meanwhile, the towering Matt – best known in Newport for his contribution to County’s remarkable 2019 FA Cup run, where he scored the first goal in a famous win over Leicester City – has consolidated the form which saw him nominated for EFL League Two Player of the Season last term.

IT’S NOT OVER YET😳

In yet another sub-plot, Jamille Matt pops up in the middle to latch onto a low cross and level this tie again. What a match!

There were signs of a wobble in February and March – including a home defeat to Mark Hughes’ Bradford City – but recent dogged wins over Colchester and Scunthorpe suggest that Edwards’ team will be able to grind out the results they need to see them over the line.

Off the field, multi-millionaire owner Dale Vince has announced that he will continue to serve as chairman despite stepping down as the CEO of Ecotricity last week.

The former New Age traveller – who was responsible for the club’s switch to veganism and carbon-neutral status – has also pledged to remain at the helm of an ambitious (and controversial) scheme to build an all-wooden 5,000 seat stadium for Rovers.

Vince’s continued involvement (at least in the short-term) should ensure the club have the resources to compete at League One level, though their meagre attendances remain a cause for concern.

Despite their lofty league position, the club attracted the lowest crowd in the division the other day, after Harrogate Town.

Will Vince continue to plug the gap in the coffers in the long-run?

Dale Vince is putting his #Stroud #Gloucestershire green energy company Ecotricity up for sale. He says he’d like to go into politics. However, he says the future of his football club, Forest Green Rovers, remains secure. pic.twitter.com/hmUEMIwNrF

With that cohort on board, there’s good reason to believe that the club won’t just be making up the numbers in the third tier.

While fans of other teams will continue to throw the ‘chequebook Charlies’ tag at Forest Green Rovers, there can be no denying their deserved status at the League Two summit –  a standing which has been achieved through playing an attractive brand of football that should put more bums on seats when (for it is surely a matter of when, not if) promotion is achieved.

Edwards, who we should not forget is still in his rookie year as a Football League manager, deserves huge credit for his work so far.

If Newport are promoted this year (hopefully, via the automatic route rather than the play-offs. for the sake of their fans’ wellbeing) there will be plenty of Welsh interest in League One next season.

That will surely include Edwards, though you wouldn’t be against him being poached by a bigger club if Forest Green do seal the title in May.

Not bad for a forgotten man of Welsh football.