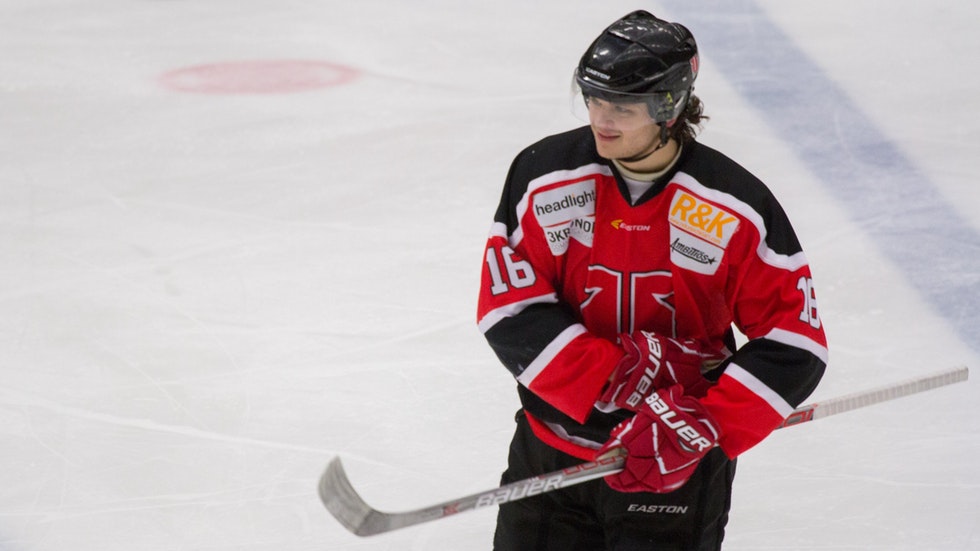 Sam Duggan during his time in Sweden.

Cardiff Devils have signed a young homegrown forward, still only 20-years-old, who was described as ‘one of Britain’s greatest talents ever.’

He has also been talked of as the ‘next Tony Hand’, a Scot drafted by NHL club Edmonton 30 years ago, and is certainly a player who will be at the heart of future GB teams as the likes of Jonathan Phillips, Mark Richardson and Matthew Myers start to wind down in future seasons.

Sam Duggan, a hugely rated centre/winger, has been playing for Jamestown Rebels in North America, but has now committed to Devils.

He arrives in Cardiff this evening, his new team-mates were told of the signing this afternoon, and will skate with them tomorrow.

Duggan will be involved in this weekend’s Challenge Cup group matches against Guildford Flames at home and Coventry Blaze away.

Devils have already made certain of going into the knockout stages and will certainly give Duggan ice time against Flames in front of home fans.

The signing is a massive move by Devils because Duggan has been tipped in Sweden, where he played for Orebro HK, and North America as a forward certain to play at a high level.

He jumped at the chance of playing for Devils and is expected to take up Cardiff Metropolitan University degree studies.

It was Orebro’s junior manager Jens Gustafsson who said Duggan is one of Britain’s greatest talents, while Hockey Sverigge compared him to Scottish ace Tony Hand.

Because Reading-born Duggan is an under-23 player – and will be for the next few seasons – he can slot straight into the Devils team.

Two seasons ago, he iced for the GB men’s senior team when they won gold in Belfast to gain promotion to Division 1One A, scoring twice and adding an assist in the five games he played for the national team.

“We believe Sam has the potential to be an impact player at this level and we hope that we can help him reach his full potential,” said Devils coach Andrew Lord.

“Sam has a well-rounded skill-set and sees the game at a high-level for his age. His time in Sweden has shaped him into a great player and has probably given him the opportunity to develop more than he would of if he hadn’t made the move to Sweden.

“He is a smart young man and knows what he wants out of this game and we think he is a perfect fit for the Devils now and in the future.”

Duggan joined Jamesstown Rebels after serving as an alternate captain for Örebro HK under-20s, putting up 10 points in 41 contests.

He was captain of the Great Britain under-20 team at the World Juniors, posting nine points in five games.

Elite Prospects say Duggan is 6ft 1ins tall and 187lbs, a big lad with plenty of time to get bigger.

He will benefit immensely from coaching development and skating with Elite League champions Devils.

Tickets are on sale for Devils’ home fixture against Guildford Flames on Saturday (7pm).