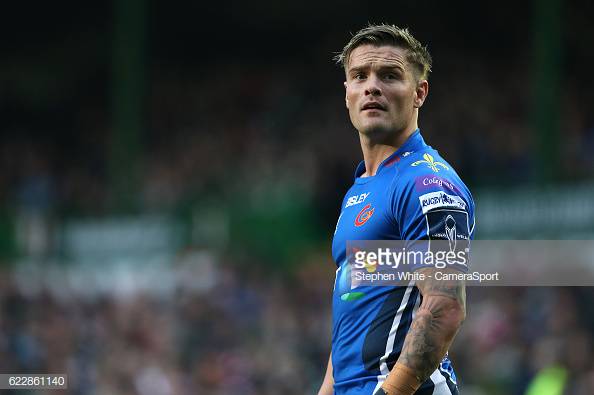 Tavis Knoyle is on the comeback trail with the Dragons. Pic: Getty Images.

As he slept in a caravan to scare off burglars from his new business venture, Welsh international Tavis Knoyle was a long way from returning to professional rugby.

The scrum-half – who has seen his career ravaged by injury – tore knee ligaments in the Dragons’ first game of last season and failed to return to the field as his team had a campaign to forget.

It left the 28-year-old at a career crossroads. With two young children to support and just a year left on his Rodney Parade deal, thoughts of retirement inevitably came to mind.

Knoyle instead chose to carry on fighting while at the same time moving into the business world by successfully setting up a new gym in Neath, called Unit9.

Now back fit, the next step is returning to the field.

“I lived in a caravan down at the gym for three to four weeks because I was worried people were stealing copper and metal,” Knoyle said.

“What people don’t realise when you’re injured is the impact it has. I’ve got a 21-month-old baby and when you’re in a cast or limping around the house, you’re no help to anyone.

“You can’t change nappies, you can’t help at all, and you’re just useless to have around. My wife Jo has done a hell of a lot for me and I’m so grateful to have her and my two children Ayla and Torin.

“Things might be different for me now if I was still single, but when you have a family to provide for it’s a different mindset which really motivates you. The reason I play is for them.”

Knoyle has 11 Wales caps to his name and it’s easy to forget he was part of Warren Gatland’s squad which reached the semi-finals of the 2011 World Cup in New Zealand.

Spells at all four regions plus Gloucester have all been interrupted by injury and it’s no surprise to hear it’s had an impact.

“I’ve had eight operations in total and it’s been three in the last two years. It’s just been a case of constant bad news for me,” Knoyle added.

“It’s been a case of getting back on the field, putting two or three games together, and then breaking down again. You do anything to try and get through it.

“I’ve taken painkillers and strapped myself up and the truth is you do that because you’re afraid of the competition in your position. You don’t want to lose your place because if you do, you don’t know when you’ll play again.

“But it doesn’t work like that and you can’t keep pulling the wool over people’s eyes. It gets to the stage where you have to be open and honest and if you’re not fit, you’re not fit.

“That’s what I’ve realised as I’ve got older. What’s happened to me has made me a better person and maybe I’ll be a better player for it now too.”

Knoyle hopes to be involved in pre-season action with the Dragons – who won just two Guinness PRO14 games last term – to prove his worth to head coach Bernard Jackman.

The affable scrum-half admits the Newport-based side have had “a gutful of losing” and want to make amends in the campaign to come.

Knoyle is one of the men with the most to prove, but insists he still has plenty he wants to achieve.

He’s spurred on by the new strength in depth at the Dragons and feels reborn at taking part in the region’s “unbelievable” training sessions.

“My whole career has been dominated by injuries and you have no idea how difficult it can be, but I’m over the moon to be back fit,” Knoyle said.

“Sport is a rollercoaster and I always remember speaking with Stephen Jones when I played with him at the Scarlets.

“He told me that your career is just about trying to cling on to the rollercoaster for as long as possible and not allowing yourself to get too high or too low.

“I’m going to give it everything I’ve got because I want to make something of myself. I’m still only 28 and I have ambition.

“When I look back, I do have regrets but there are also lots of things I couldn’t have done anything about. It’s not that long ago I was playing for Wales at a World Cup.

“The truth is playing for Wales opens up a lot of doors for you. That’s a long way away for me right now, but there is another World Cup around the corner and I won’t rule anything out.

“Representing your country is still the biggest thing you can do and every player in Wales will tell you that. The dream is to get back there, but for now it’s one step at a time.”