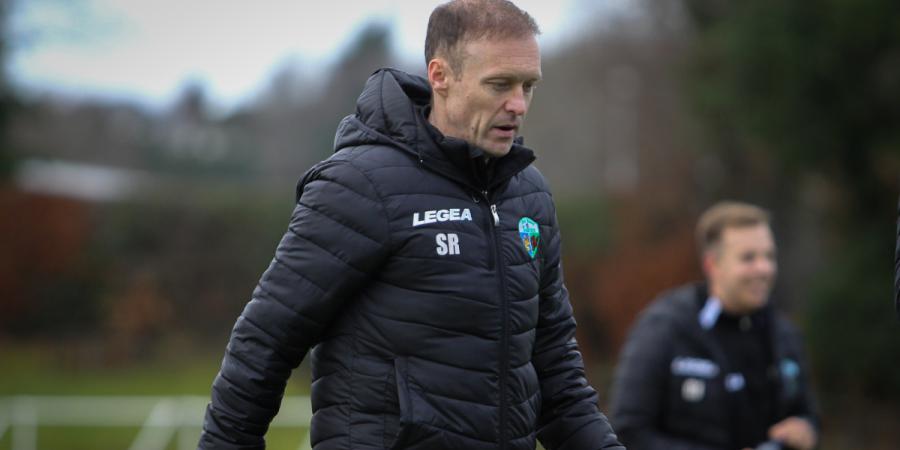 Scott Ruscoe admitted The New Saints had been “professional, rather than inspiring” as they kept their comfortable gap at the top of the JD Cymru Premier League.

The Saints manager knew his side weren’t going to get an easy ride at Cardiff Met at the weekend and so it proved as they struggled to bag a 1-0 win to move six points clear at the top.

“I hadn’t won here for a few years, so it was nice to get a win against a team that sets up well and can frustrate you,” said Ruscoe.

“But I felt we were comfortable even though it’s not one of those performances that you feel over the moon about.

“We need to be quicker and sharper and to move the ball more quickly, but the goal came from a really good delivery.”

There was an early shock for the league leaders when Elliot Evans hit the woodwork for the students and the first-half was a tense and tight affair. In the end, the small margin of difference came in the 55th minute when Liam Black conceded an own goal.

That proved the difference between the two sides and allowed Ruscoe and his team to head back to north Wales with their first win at Cyncoed since March, 2017.

That meant there was relief all round after reigning champions Connah’s Quay Nomads had won the previous night.

The Nomads had to take the field without Callum Roberts and Lewis Brass, who were both missing due to their red cards picked up in the 2-1 victory over Caernarfon Town, but were still good enough to beat Cefn Druids 2-1.

It was the first game for the Druids since the firebreak lockdown had finished because their game the previous weekend against Haverfordwest County had been postponed due to the Bluebirds being placed in self-isolation.

But they showed no signs of rustiness as they gave a great account of themselves against a team at the other end of the table.

A Michael Wilde header opened the scoring for the champions before an own goal from Ryan Kershaw doubled the lead.

Josef Faux pulled one back for Druids in the 63rd to ensure there was a competitive edge to the game right to the end.

Not one, but two birthdays in one day! Everyone would like to wish our very own @SwannyEdwards a very big happy birthday! We can’t thank you enough for everything you’ve done for us as a club! Thank you

With the Druids and Cardiff Met both losing, it was a great weekend for Flint Town United to find their scoring edge.

Sandwiched in between those two teams at the bottom of the table, Flint came up with a 3-0 win at Haverfordwest to move level on nine points with the students with what was only their third win of the season. It also ended a run of seven defeats in a row.

In what proved to be a disastrous afternoon for the home side, they not only conceded three goals, but also had two players sent off. Flint also lost a player to a red card.

Alex Jones gave Flint a 1-0 lead in the first half and then Connor Harwood made it 2-0 in the 50th minute.

Alaric Jones then saw red for the Bluebirds with his second yellow card before it became 10 v10 when Wes Baynes was sent for an early bath.

The scoreline moved to 3-0 shortly after Kieran Lewis became the third player to be sent off. The final nail in the home coffin was provided by Ben Steer in the 87th minute.

Newtown picked up a point on the road at Jenner Park as they held Barry Town United to a scoreless draw in the other game. It means Barry have now gone five games without a win.

Nathaniel Jarvis and James Davies both went close for their respective sides in a tight first-half. After the break Kayne McLaggon and Sam Bowen almost broke the deadlock for the home side, while Nick Rushton perhaps should have scored for the Robins.

It was the second draw played out between the two sides after their 1-1 draw at Latham Park earlier in the campaign.

Barry are now six points adrift of third placed Bala Town, while Newtown are flirting dangerously with the relegation zone.