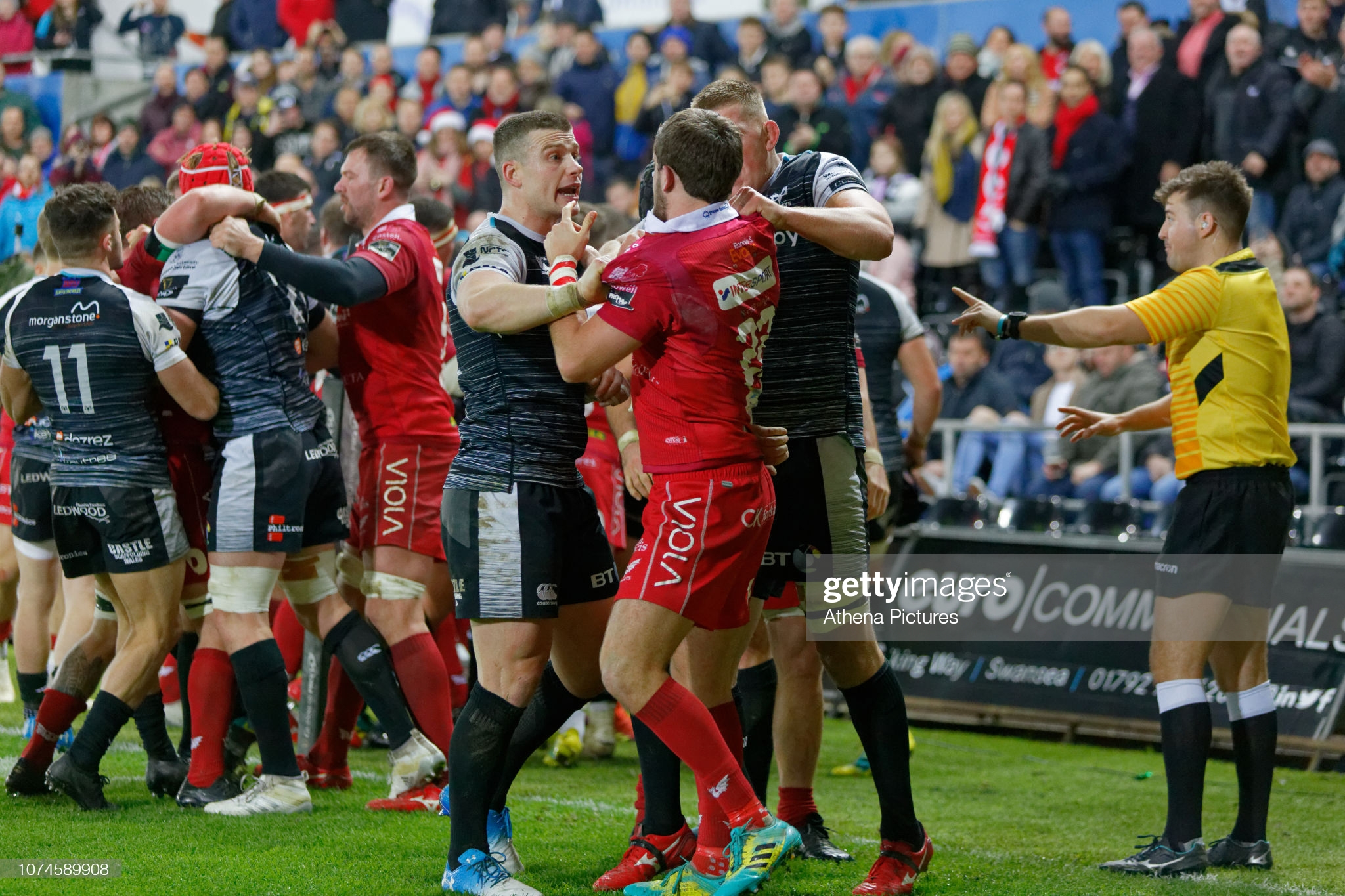 The Ospreys get to grips with the Scarlets in 2018. Pic: Getty Images.

Toby Booth has admitted the Ospreys have given themselves a harder task by taking their Boxing Day derby clash against the Scarlets to the home of their opponents.

With the Liberty Stadium pitch being relaid, Booth’s region did not have much choice in the matter but their head coach reckons the move to Parc Y Scarlets has forced a hardening of their mentality for what is always a testing fixture.

“It doesn’t affect our preparation. In fact, it means we probably have to be even better. We are putting more pressure on ourselves by playing away, said Booth.

“That’s a good test for us and the Scarlets have been probably the most consistent team in recent years from an outcome point of view and where they are.

“It’s an opportunity to see how far down the road we are.”

During this exciting time for rugby fans, the Ospreys will be happy going into this fixture after back-to-back wins in the European Challenge Cup against Castres and Worcester Warriors.

Booth is very happy where his side is currently at in several aspects.

“We’ve shown a lot of character in all of our games even the ones we’ve come second in.

“If you think back to the Benetton game, which was very similar to the Worcester game in relation to getting a victory in the last knockings.

“It speaks volumes for you culturally and where you are going from an effort and desire point of view, which are great indicators of the togetherness of the group.

“It ticks a lot of culture boxes as well as the outcome box.”

The clash will see Booth go head-to-head with the Scarlets’ Glenn Delaney – a coaching colleague from days gone by at London Irish, before Booth left the club to join Bath.

“I know Glenn well from my London Irish days and I know Richard Whiffin very well. I know what the Scarlets are in relation to their pecking order in Welsh rugby.

“That’s not unusual for us and hence the reason we are in not just the building of an identity and a style of play we are nurturing our young talent.

“We are trying to grow our squad to be more competitive so that we can compete not just on a weekly basis but on a season basis.”

Ospreys will be hoping to back up their 24-22 Pro14 win against Benetton at home last month and stay in third place in conference A ahead of the Dragons.

Having won their last four matches in five in all competitions, including last weeks automatic 28-0 win over Toulon, Scarlets will be content after their shaky start to the season.

Coach Delaney is excited for the occasion, despite the game being played behind closed doors.

“We love playing the Ospreys, when I remember back to last year with 15,000 in the stadium, it was phenomenal.

“That is the biggest shame of this for me, people aren’t going to be able to come to watch the game. These are the games they live for and the atmosphere we had here 12 months ago was electric.

“I haven’t experienced that kind of fervent support before. It is going to be a great derby match and I hope everyone gets an opportunity to experience it and share it as best they can.

“Obviously, with the current lockdown, the reality is we need to bring a bit of cheer and have a bit of distraction and a bit of escapism. T-ese games tend to deliver that.”

Despite this, the Kiwi is staying positive and is happy with how Jake Ball is progressing since sustaining a concussion away to Bath.

“Jake is back in the mix for this week after not being available last week because of concussion. He is a champion of a bloke, runs a good lineout and is pretty influential.

“We are so fortunate that those senior guys are so giving with their time, he is a great role model for the likes of Jac Price and Morgan Jones, players who are learning their craft off a guy who is at the top of his game.

“Jake was disappointed he couldn’t continue in Bath; it is good to have him back.”

With Wales’ hectic Autumn meaning top players have missed several league matches this season, Delaney knows how important these encounters are for the individuals and the fans.

“Wayne (Pivac) and his coaches will always look at these games as indicators.

Join us for a fierce Boxing Day clash! 👊

“The players do know each other incredibly well and you tend to go harder when you play against your mates. There will be some great matchups across the field. That is the sub-plot to these games and what makes them so intriguing.”

Scarlets will look to at least get to second spot temporarily and overtake Connacht in conference A come Saturday night.

The Ospreys are captained again by Welsh international Justin Tipuric and have given full back Dan Evans his 150th game for the side.

Welsh internationals Sam Parry and Owen Watkin are both out.

Scott Williams returns to play against his old club and Dan Lydiate moves from eight to six.

The team in Llanelli have starts for both Johnny McNicholl and Jonathan Davies, with Leigh Halfpenny out completely.

Jake Ball returns after being unavailable for the cancelled match last week against Toulon.