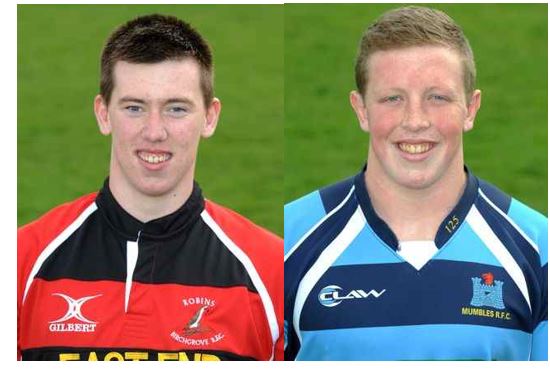 Adam Beard (left) and Harrison Walsh were 18-year-olds together at the Ospreys.

As the song says, the road is long with many a winding turn that leads us to who knows where. Two former Ospreys teammates are at the peak of their respective sports this summer, but no-one could have predicted the road that took them there, as Owen Morgan reports.

In May 2014 two promising rugby players from Swansea were amongst seven young hopefuls handed development contracts with the Ospreys.

The two 18-year-olds were making their first steps towards their dreams of becoming professional sportsmen and representing their country at the highest international level in their sport.

However, just a year later Adam Beard and Harrison Walsh – who had also played together for Swansea schoolboys – were to take very different paths towards their sporting dreams.

While Beard carried on his trajectory towards stardom with the Ospreys and Wales, Walsh’s ambitions for rugby fame were shattered by a career-ending injury.

But six years later, their career paths are converging once again – but in vastly contrasting sports and in different parts of the globe.

Beard has been earning rave reviews as part of the British and Irish Lions rugby squad in South Africa.

While his former Ospreys and Wales age-grade team mate Walsh is one of seven para athletes from Wales named to represent Great Britain at next month’s Paralympics in Japan, where he will compete in the discus.

Walsh’s return to top flight sport is one of incredible courage, persistence and resilience, which comes as no surprise to some of those who knew him as a powerful loose-head prop back in his rugby playing days.

Dan Griffiths, Ospreys Rugby general manager, was academy manager with the Liberty Stadium outfit when Walsh was part of the set up.

“A driven and diligent young professional with exceptional physical qualities.

“It was hugely disappointing to see the severity of the injury and the impact it had on his rugby career, despite the best efforts of Harrison and the club.

“He was part of a talented Ospreys academy group which included Welsh international second row, Adam Beard, who is now with the British and Irish Lions on tour in South Africa.

“Having two Ospreys plying their trade at the highest level in their respective sports is something we are all proud of.

“It’s a testimony to Harrison’s resilience and strength of character that he will be representing Great Britain at the Paralympics in Tokyo.

“All involved at the Ospreys are extremely proud of his achievements and wish him all the best.”

When Walsh was awarded his development contract with the Ospreys in 2014, the region described the Mumbles RFC product as “an aggressive and destructive player, powerful in the scrum and with a high work rate around the field”.

Those qualities had also earned him Welsh Under-16 and Under-18 selections alongside the likes of future Welsh internationals Kieran Hardy, Dillon Lewis, Callum Sheedy and Owen Watkin.

Walsh had been named in the same Wales Under-20 squad as another current British Lion, Josh Adams, when disaster struck.

Just a week before Wales were due to play England, the prop suffered his fateful injury coming on as a late replacement in a club match for Swansea RFC in January of 2015.

The freak leg injury, which happened during the last play of the match, was so complicated and extensive that it left Walsh essentially with no feeling and impaired movement in his right foot.

Steve Mellalieu, Ospreys’ sports psychologist, was one of the region’s staff that supported Walsh following the injury.

Mellalieu recalls how the youngster showed all the strength he had displayed on the rugby field as he came to terms with what the injury meant to his playing career.

“Harrison demonstrated all the qualities he had as an academy rugby player in his approach and diligence following his injury,” said Mellalieu.

“He applied himself to life after rugby, undertaking academic study at Cardiff Metropolitan University while also transitioning into discus throwing. His appearance in Tokyo for the Great Britain team underlines his determination to succeed.

“Forced retirement from sport through injury can be a particularly traumatic experience which places great demands on athletes.

“As a club we aim to provide structured and ongoing support to all our players forced to retire from the game.”

Walsh spent two years trying to rebuild his right leg along with his rugby career and it was while coaching an Ospreys junior team that David Jones, a fellow coach and a sport and health manager with the local authority, suggested he try out para athletics.

But since then, the 25 year-old Disability Sport Wales para academy athlete has barely looked back.

When Walsh was added to British Athletics’ Olympic and Paralympic world class programme in November of last year, coach Nathan Stephens spoke in similar glowing terms about his charge as Griffiths and Mellalieu did this week.

I love Adam Beard so much I grew a beard myself

“He wants to be the best at what he does in everything he does,” said Stephens. “And he is a pleasure to coach, not only is he a brilliant athlete, he’s a really nice person.

“As much as he puts into the sport, he wants to give back, so he wants to help the youngsters come through as well. He wants to develop para sport as a whole not just himself. It’s a testament to him that he is passionate about everything he does.

“He’s just a nice person to be around. For the younger guys coming through he is a very good role model in his commitment levels and what he does.

“It’s having that mindset to be adaptable. He has had to adapt with his disability, coming from rugby to athletics is totally different. It’s coming from a team environment to an individual environment.”

As a former Paralympian and F57 javelin world record holder, Stephens knows what it takes to compete at the very top echelon of the sport.

“I won’t push too much, but in the back of my head I know he has a real chance of getting there (Tokyo).

A massive congratulations to former pupil @harrisonwalsh1 on his discus bronze medal at the Bydgoszcz European Championships.

“Our main goal for Harrison is Paris. He is still young in his training age for Tokyo, but if we get there it will be amazing.

Amazing indeed. Walsh is now heading to represent Great Britain at the Tokyo Paralympics which start on August 24 – just a couple of weeks after his former team mate Beard is due to return from representing the British and Irish Lions in South Africa.

Walsh’s story is surely one to inspire sports people at all levels that there is hope beyond even the most serious of injuries.