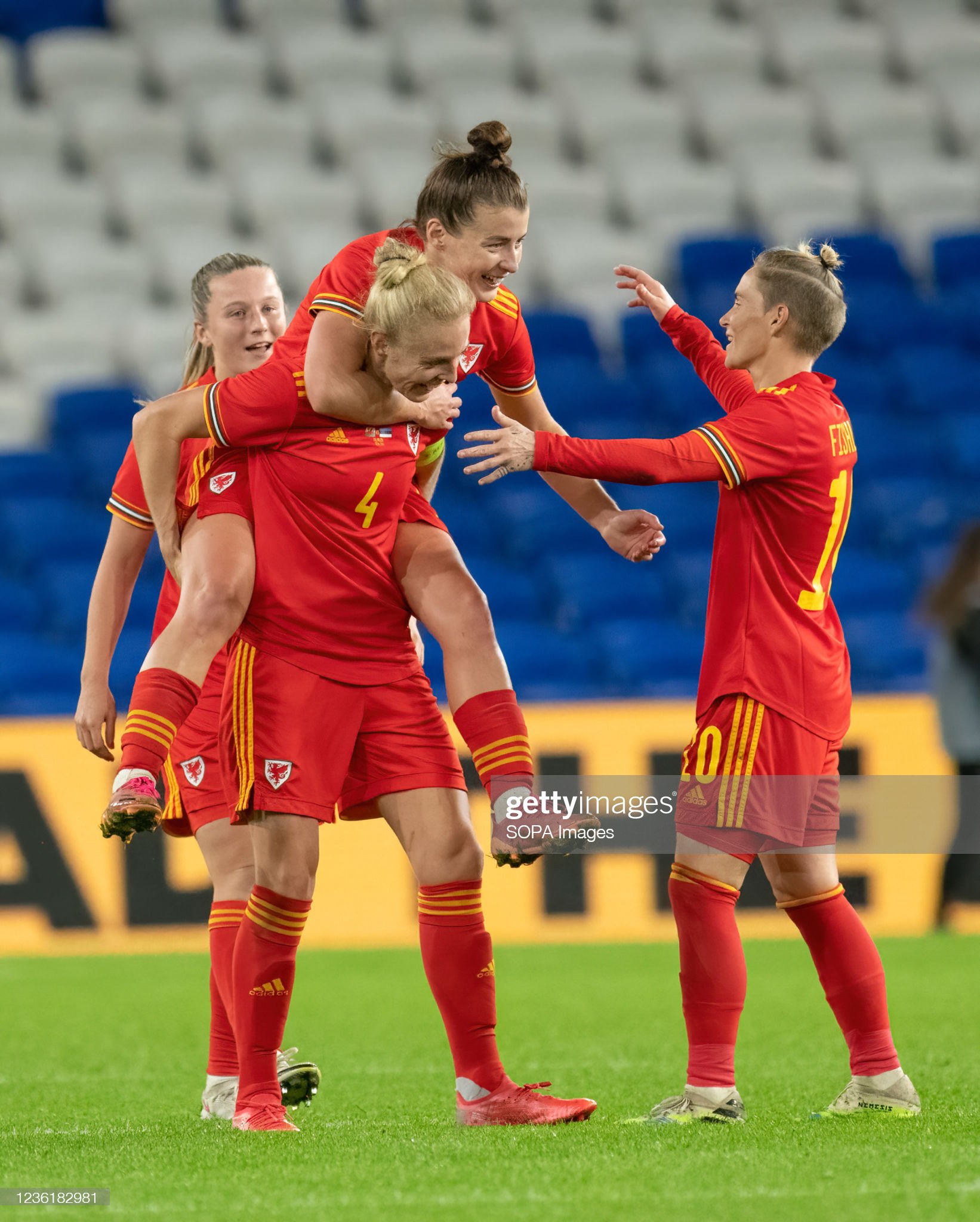 Wales will be hoping for a huge atmosphere in Cardiff, as they look to qualify for the World Cup. Pic: Getty Images.

So, an England football team has finally won a major tournament and it hasn’t been a totally unbearable experience for the rest of us (something I never thought I’d write).

The enhanced profile this summer’s European Championships has enjoyed – partly as a result of media interest in the English team’s progress, and more broadly as a consequence of nightly prime-time terrestrial coverage – can only be seen as a positive for the women’s game.

If even a very small number of the record 17.4 million TV audience for the England-Germany final were Welsh girls whose interest in football has been piqued for the first time, that would superb.

Encouragingly, the FAW has already reported a huge spike in ticket sales for Wales’ crucial home World Cup qualifier against Slovenia next month in the aftermath of the Euros final.

Watching Euro 2022 has been a frustrating experience for Welsh fans, though. And it has nothing to do with our neighbours’ thoroughly-deserved success, or even the ongoing wanton defacement of the Neil Diamond back catalogue.

AAAAAAAND for those of us on the Cymru side of the bridge …. let’s pack out the Cardiff City Stadium in September pic.twitter.com/Kga3pnGjGM

The truth is that Wales’ women could have (and absolutely should have) been at the party too.

The transformation of the Welsh women’s team over the last decade (a process initiated by the inspirational Jayne Ludlow, and now continued by Gemma Grainger) has been accompanied by a succession of painful near-misses; the kind the men’s team specialised in over the course of decades.

Wales’ women missed out on the 2015 World Cup play-offs by three points. Jayne Ludlow’s side then lost only a single game in qualifying for the 2019 World Cup – a fine achievement in a group containing England and Russia – before missing out on a play-off (as one of the four best group runners-up) by courtesy of a single point.

In an even more ludicrous twist, Wales were denied a play-off spot for the 2022 European Championship on the basis of having scored less away goals than Northern Ireland in their two drawn head-to-heads – even though the overall Welsh goal difference was +12 in comparison to Northern Ireland’s 0.

The women from Ulster went on to endure a dismal tournament this summer, losing all three of their group games and shipping eleven goals in the process. Wales fans would be forgiven for thinking that Gemma Grainger’s charges would have fared far better.

Congrats to the @Lionesses There is obviously stuff steadily and successfully happening for girls and women in football in the UK, but I hope this enhances and accelerates it. And particularly happy for the @HerGameToo campaign too.

Hope Wales are at the next tournament 🙏🏴󠁧󠁢󠁷󠁬󠁳󠁿

Indeed, as midfield maestro Jess Fishlock has pointed out, Wales have performed well in recent ties against a number of Euro 2022 tournament finalists: semi-finalists France were pushed all the way in recent World Cup qualifiers in Guingamp and Llanelli; and quarter-finalists Belgium were taken to penalties in February’s Pinatar Cup.

It’s absolutely time for Wales’ women to feature in a major tournament, and the likes of Fishlock, Sophie Ingle, Natasha Harding, Angharad James, Helen Ward, Kayleigh Green and Gemma Evans are all more than good enough to grace the biggest stage.

Four points from the final two World Cup qualifiers against Greece and Slovenia next month will be enough to secure a play-off berth, and a golden chance for them to do so.

Irrespective of results in September, the Welsh FA needs to continue to invest in the women’s game from the grassroots up and build on progress that has already been made. Before the pandemic took hold in 2020, football participation rates for women and girls in Wales had risen by 50% in four years, and there are now over 11,000 registered female players.

The ‘Huddle’ scheme – launched in 2019 as a means forging a bridge between schools and club football – has been a welcome addition, but there are still notable gaps in the system.

One example is the postcode lottery that exists in terms of access to girls’ teams – a problem which is acute in the South Wales Valleys. According to the FAW Trust, there is just one girls’ side registered in each of the Cynon, Merthyr and Rhondda valleys respectively; and none at all registered in the Rhymney, Ebbw Fawr or Ogmore Valleys.

Things may not be quite as bad as they were in the days when Wales legend Jayne Ludlow had to travel from Llwynypia to Barry to play her football, but it remains a disjointed and unsatisfactory picture.

Part of the problem is a lack of coaches. The FAW’s 2017 Women’s Strategy set a target of 600 new female coaches in place by 2024, but it’s unclear how close it is to reaching this target (the goal wasn’t referenced in the updated 2021-2026 Women and Girls Football Strategy document published last year).

Wales’ four fully-professionally sides have a role to play here in expanding their regional outlook. There have been some encouraging signs on that front, too.

For example, last year Newport County AFC partnered with the FAW Trust to launch the Newport County AFC Girls Centre, with an initial cohort of 350 girls from across Gwent participating across age groups from under-10s to under-16s.

That’s the kind of work that needs to expand, and requires stronger and more concentrated FAW collaboration with the Welsh clubs playing in the EFL.

They do. Despite everything.

That narrative needs to change.

Another issue facing the FAW is the efficacy of the domestic league system. The FAW Women and Girls Football Strategy emphasises that it sees the domestic Adran Leagues as a platform for producing future international players, but that’s yet to come to fruition: recent development squad call-up Phoebie Poole was a rare example of an Adran Premier achieving national recognition.

The FAW clearly don’t have the budget – or the clout – to start dishing out WRU-style national contracts to keep star players in Wales, but there needs to be a sense that that the domestic league isn’t a dead end for aspiring talent.

So there are challenges ahead, but lots to feel positive about – especially if Wales’ women qualify for the World Cup. We shouldn’t constantly compare ourselves to our immediate neighbours – they are one of only six countries in Europe with over 100,000 registered female players, and should probably question why they’ve taken so long to win a major tournament – but we should be ambitious.

Over the days and weeks ahead the UK press will (or at least should) use England’s success in the Euros as the catalyst for a debate around the chronic under funding of women’s football in all settings.

That’s a good thing, and Wales should be part of that debate too – all the home nations’ football associations are guilty of the historic, decades-long sin of shunning and undervaluing women’s football rather than embracing its potential as a means of engagement in sport, an untapped revenue stream, and a societal healer.