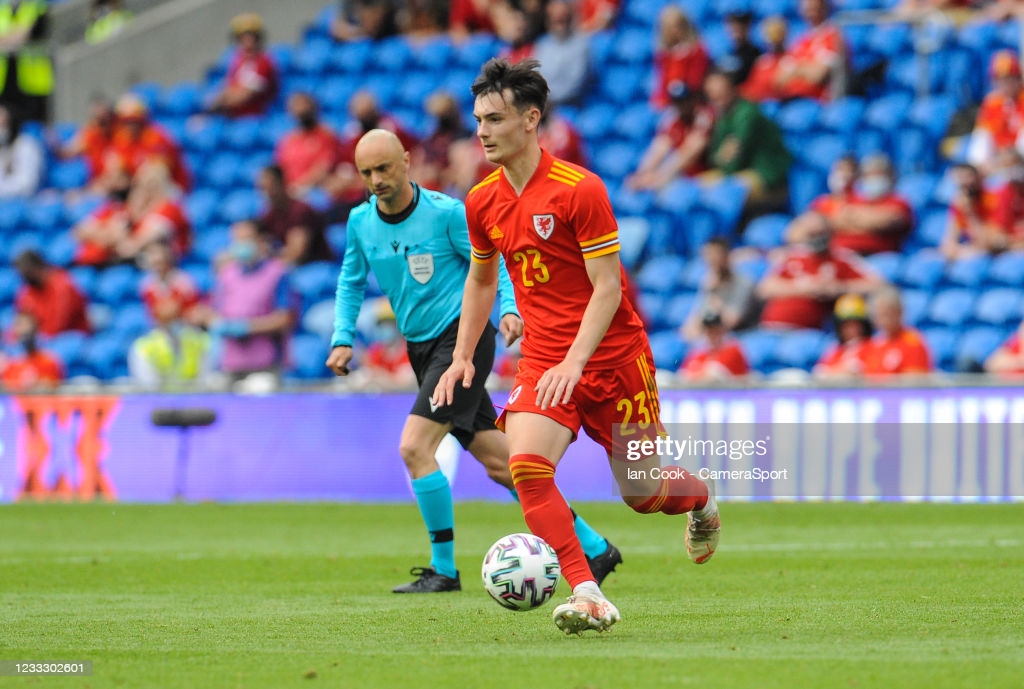 Wales resume their World Cup qualifying campaign on Sunday when they face Belarus in the Russian city of Kazan. It’s another long haul trip for Rob Page’s squad who have had to get used to doing it the hard way in recent months. But few of their players can match the miles on the clock being run up by Dylan Levitt, as Graham Thomas reports.

Dylan Levitt is hopeful the substantial air miles he is clocking up can qualify him for a place at the World Cup finals with Wales next summer.

The Manchester United midfielder is pressing for a starting spot for his country in their vital qualifier against Belarus on Sunday, a match that is live on S4C.

The game is taking place in the Russian city of Kazan, over 2,500 miles from Wales and almost double the distance to Minsk, where the tie would have been staged if sanctions were not being applied that prevent air travel to the Belarussian capital.

But time on an aircraft is something 20-year-old Levitt is getting used to as he stakes his claim for caretaker manager Robert Page’s side.

Levitt was not only part of the Wales squad at this summer’s Euro finals that shuttled back and fore between Baku, Rome and Amsterdam.

But in the past 12 months, the youngster from Bodelwyddan has gone on three different loan spells that have taken him from Charlton in south London, to NK Intra 1961 in Croatia, and now Dundee United in Scotland.

Levitt had to fly from Dundee to Coventry – to obtain a Russian visa – before going back to Scotland on the same day, before linking with Wales in Cardiff, on route to Finland (for Wednesday’s friendly) and then Russia.

“There has been a lot of travel, but that’s just something you have to get used to if you want to play for your country,” says Levitt, who was singled out for praise by Page after the 0-0 draw against the Finns.

“I had fly from Dundee to Coventry for the visa and then back the same afternoon. At least I had Ben Woodburn with me for that one, as he’s on loan with Hearts.”

Even when Levitt made his one and only appearance for United, it was in faraway Kazakhstan – a Europa League tie against Astana in November 2019.

But life on the road – or in the air – is not grounding Levitt’s progress with Wales as he already has 10 caps – only one less than the total of all appearances he has made for his clubs.

Official: Dylan Levitt joins Dundee United on loan until the end of the season pic.twitter.com/2PXTfEXfDW

United’s England star Jesse Lingard – who has had loans at five different clubs – is one of those who has advised Levitt how to cope with life as a long distance loanee.

“The first loan took me out of my comfort zone. Once you have been on one loan, you get used to the experience.

“Jesse Lingard is quite close to the young players at United. He’s been through quite a few loans and he speaks well to the younger players about what its’s all about.

“United want me to try and express myself as much as possible, to try and get as much game time as I can and experience different styles of football. Scotland is quite a physical style of football, so it is different.

“United have a very strong squad at the moment, but they recognise that I’m getting called up my country and they keep in touch with me every week. They ask me how life is going.”

Levitt may be earning his stripes in the Scottish Premiership at present, but he still has sharp memories of his United debut.

“I still have flashbacks to that day. The one thing that stood out to me was when you’re lining up on the pitch.

“That’s what I think made it special because we all played in the same game in Europe and that was all our dreams since the age of seven, eight.

“Obviously I’ve been told before that people are United mad but to actually witness it was breath-taking.”

An impressive, energetic display against Finland means Levitt could well be asked to play the same midfield starting role against Belarus on Sunday, a match Wales need to get something out of if they are to keep alive hopes of catching group leaders Belgium.

A victory in fanless Kazan would set Wales up nicely for their second qualifier at home to Estonia next Wednesday.

One of these would do nicely…

“I think we have a good chance of qualification if we keep building our performances,” says Levitt.

“To qualify for the World Cup would be a massive achievement and give everyone a huge boost, just as it did with the Euros.

“We had had some injuries but we still have a strong squad and every player’s expectation is still the same.”