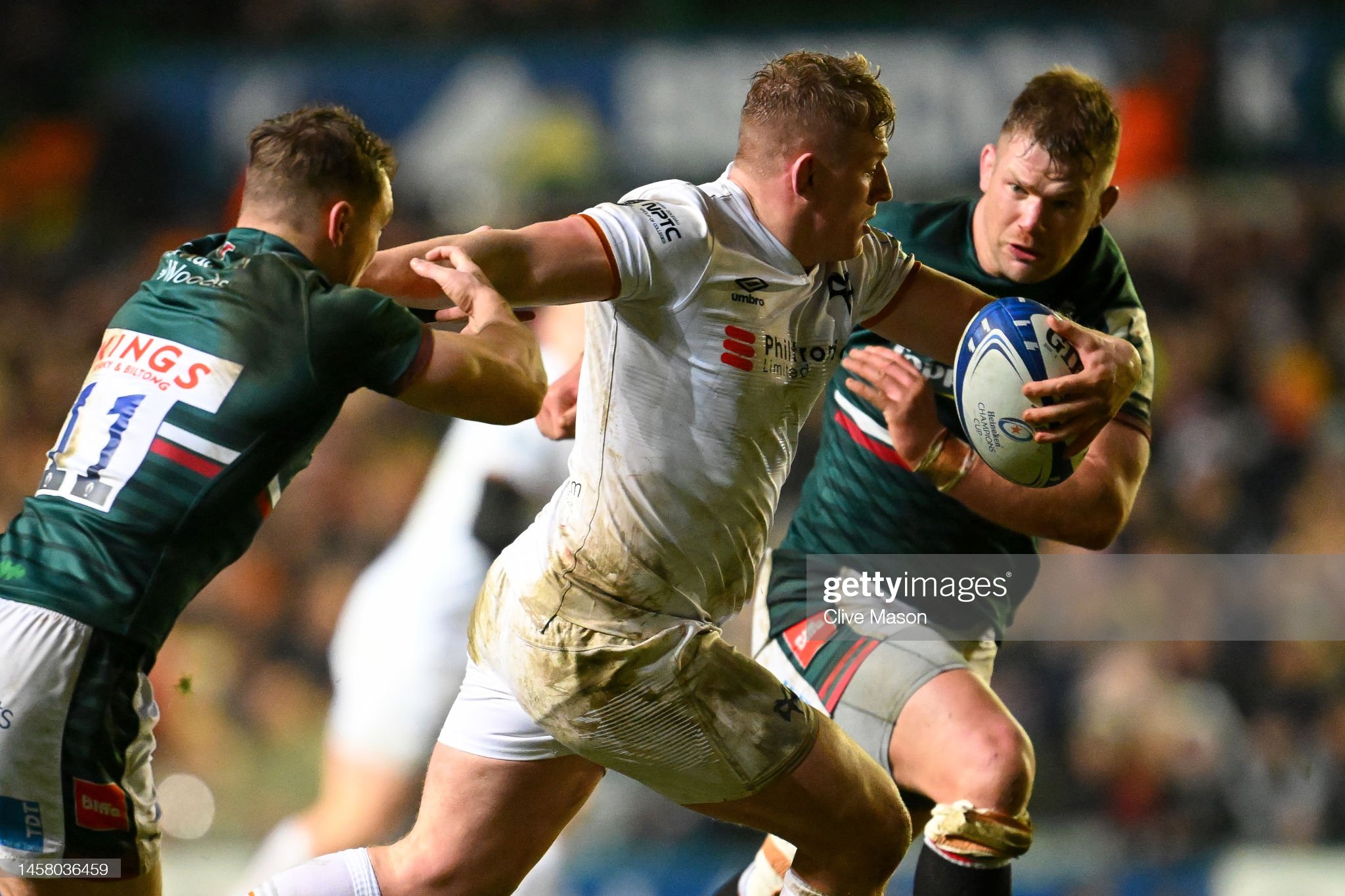 Jac Morgan of the Ospreys gets past Harry Simmons of Leicester Tigers. Pic: Getty Images.

Toby Booth has revealed a back-to-basics campaign has been the bedrock to the Ospreys’ success in Europe this season.

The Swansea region are waiting to learn their opponents after securing a home draw in the last 16 of the Heineken Champions Cup – the first time they have reached the knockout stages for 13 years.

It came after they earned one the best results by any Welsh team in Europe, a dramatic 27-26 away at Leicester Tigers on Friday night.

It was the first time any Welsh side had won at Welford Road for 25 years, since Swansea’s victory there in 1998.

The Ospreys showed little as an attacking threat, but their defence was heroically defiant, whilst the destructive power of their scrummage won them the contest in a nail-biting final 10 minutes.

“We have gone back to a few basics in certain areas and got rewards from that,” said Booth.

“We have worked extremely hard in my time here at getting the fundamentals correct from a set-piece point of view.

“Duncan Jones and Richard Kelly have done a great job in that aspect to give us good platforms.

“You get a game controlling player at 10 like Stephen Myler, Gareth Anscombe or Owen Williams and we have some potency outside. We have some very good players.”

“We won ugly (against Leicester), we can be much better. It sounds obtuse to say that but we have played better and lost. Good teams find a way.

“The advert of a team that cares for each other is how it defends and this European campaign has been built on aggressive defence.

“That is pleasing because it shows they are emotionally invested in the Ospreys, each other and what we are doing. This group is special. That’s why when we keep it together, it performs like it does.”

The only low point on a spectacular night for Welsh rugby was a knee injury to one of Warren Gatland’s three hookers, Dewi Lake, who had to be replaced by Scott Baldwin in the first half.

Lake used crutches after returning to the dug out for the second half.

Leicester gifted their opponents a try scored by Keelan Giles and that was the catalyst for Ospreys to stage a remarkable rally, which saw them batter the Tigers’ line for a sustained period of over 15 minutes before Jac Morgan crossed for a hotly-disputed try, which was awarded after countless replays.

“It shows the fighting spirit we’ve got in the whole squad here!” 👏

Booth was hopeful Lake recovers from his injury quickly as it put his involvement in the Six Nations for Wales in serious doubt.

He added: “When the draw was made, there was a very sharp intake of breath and most people would have thought that the later rounds in April and May wouldn’t concern us.

“The final try was not clear-cut but I thought Keiran’s (Williams) try just before was much clearer and should have been awarded.

The Ospreys lost their opening encounter at home to an under-strength Leicester but – since that defeat – they have recorded a notable double over French champions Montpellier before reversing the result with Leicester thanks to a conversion by Owen Williams in the 12th minute of added time following a try from Jac Morgan.

Booth said: “I didn’t think the drama of last week’s win could be bettered but it certainly was.

“Sport is amazing but it was very stressful tonight and I wish it could be more straightforward, although I’m delighted to come out on the right side of the result.

There aren’t many prouder Coaches than Toby Booth at the moment! ❤️@S4CRygbi | @ospreys pic.twitter.com/Z5m2KBIjx3

“Dewi (Lake) is a tough cookie and doesn’t leave the field easily. He bent his knee backwards and is on crutches so all we can do is hope he recovers quickly.”

Leicester head coach Richard Wigglesworth was pleased to reach the knockout stages but disappointed with the defeat.

He said: “We are desperately disappointed as the defeat was by our own making as we opened the door for them and they are a good side in great form.

“We produced some good stuff out there but we couldn’t quite finish it off and the disappointment will certainly linger.

“I didn’t see any grounding for their winning try but I would say it wasn’t a score and they obviously would say otherwise.

“We are through to the knockout stages and we would have taken that outcome before the competition started.”

The Scarlets kept their winning record in the European Challenge Cup by doing the double over French side Bayonne out in France, winning 20-7.

The win means they top Pool B and have qualified for a home game in the Round of 16 and in the quarter-finals should they get through.

Captain Jonathan Davies, co-centre Joe Roberts and wing Steff Evans crossed for tries but the Scarlets failed to register a bonus-point win against a side they had thumped at home. The Scarlets now have to wait to see who finishes in sixth place in Pool A to discover who they will face.

Cardiff ended their Challenge Cup group on a downbeat note as they lost 37-24 in Brive to miss out on a top-two place.

They came from 20-3 down to lead 24-23 with tries from James Botham, Rhys Priestland and Jason Harries.

But Brive added two further converted tries to earn themselves a last-16 visit to Scarlets.

Cardiff will have a home tie in the last 16, but missed the chance to host potential quarter and semi-finals.

0 thoughts on “Ospreys Have Gone Back To Basics And Rebuilt Something Special That Can Challenge In Europe, Says Toby Booth”