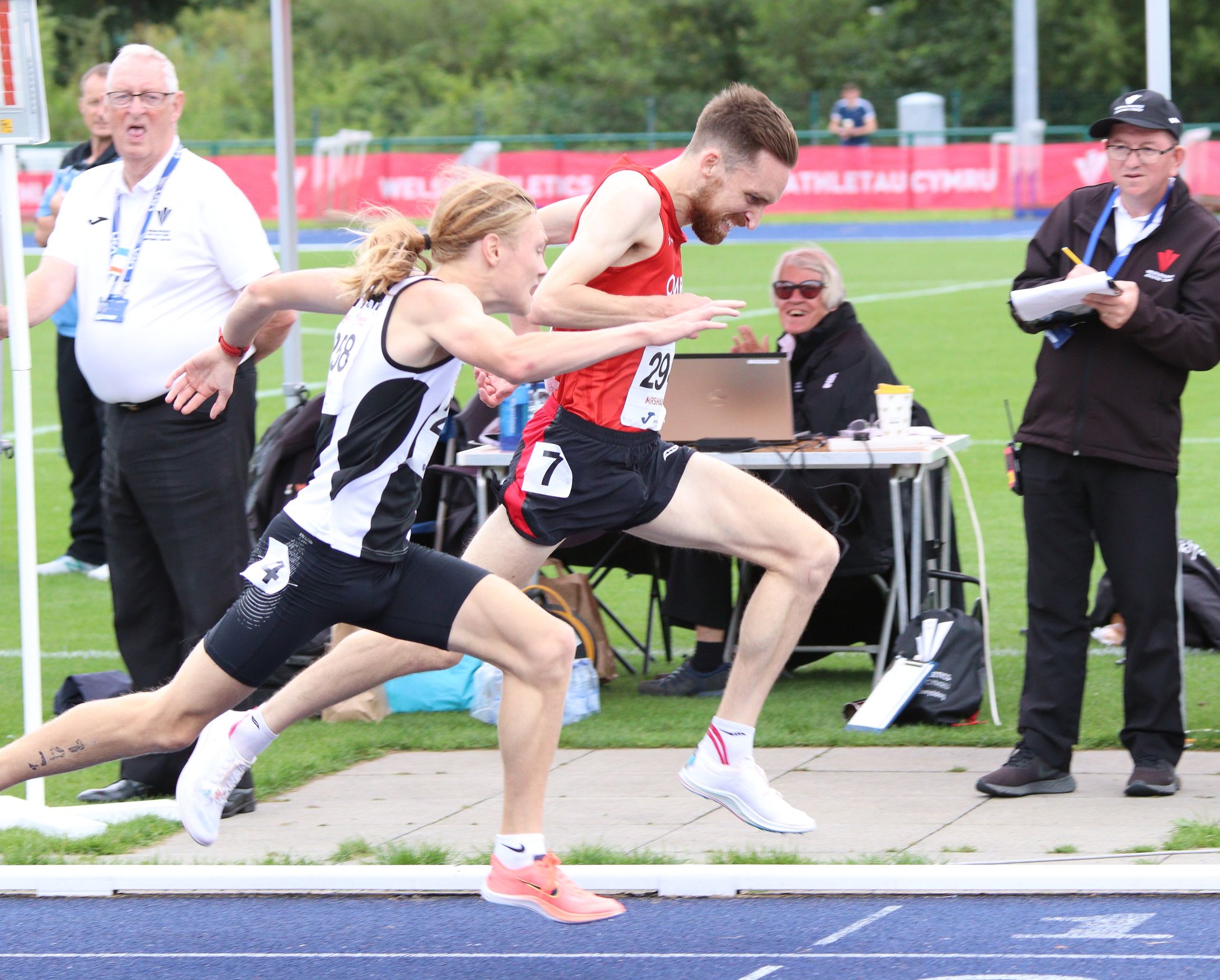 Tom Marshall finished 200th of a second ahead of Osian Perrin at the end of the 5,000m final. Pic: Owen Morgan

Tom Marshall won his 16th Welsh title across all running disciplines on Sunday in one of the closest races of his illustrious career.

The Cardiff middle distance star has moved up to run 5,000m on the track this season after making his name primarily over 800 and 1500m.

But he will seldom have been pushed closer than he was in the final few steps of the 12.5-lap race around the Cardiff International Sports Campus track.

Just 200th of a second separated Marshall from rising Menai Track and Field star Osian Perrin as he crossed the line to win in 14:51.85 and claim his seventh track title at the Welsh Athletics Championships.

Cardiff’s Lloyd Sheppard, who had made much of the early running, was third in 15:02.58.

Marshall, who represented Wales over 800m at the 2018 Gold Coast Commonwealth Games, said of the breathless end of to the race: “With 200m to go, seeing  the speed Osian came around me. I just thought ‘that’s it, game over’.

Asked how he managed to overhaul the 18-year-old, Marshall said: “I really don’t know, I think it was just down to experience.

“Osian went and I thought, ‘this is going to be fun. Let’s go and get as close to him as I can’.

The Welsh Championships are delivering again! It’s one of the closest finish we’ll see this weekend @TomMarshall1500 & @OsianPerrin sprint to the line in a photofinish in the SM 5000m.

“I just kicked and kicked and every time I kicked Osian just went again and I thought, ‘I can’t do anything here’.

Not even the two 100m finals of the day could match the closeness of the 5,000m last lap burn up.

In the men’s short sprint Cardiff’s Jeremiah Azu took the Welsh 100m title for the first time as he beat reigning champion Sam Gordon in the clash of Wales’ current two fastest men.

Azu, who last month won gold the European Under-23 title, crossed the line in 10.32, while close rival and friend Gordon clocked 10.39. Josh Brown made it a Cardiff clean sweep as he took bronze in 10.67.

The women’s 100m title was won in fine style by Hannah Brier who crossed the line with a beaming smile across her face.

The Swansea Harrier, who has been in outstanding form this season and is targeting a second Commonwealth Games, crossed the line in 11.44.

Mica Moore, who is aiming for a second Winter Olympics in the bobsleigh next February, won silver in 11.62 ahead of Thames Valley Harrier Shannon Malone who clocked 11.68.

Another Swansea Harrier, Carol Granville, won the 100m hurdles in a new personal best of 13.45.

Daniel Murathodzic, of Cardiff Archers, won the men’s 110m hurdle title in 14.95 ahead of Aled Price, of Swansea Harriers, and Harri Wheeler Sexton, of Cardiff.

The Great Britain international was in unstoppable form as he powered away from the rest of the field to stop the clock in 46.78.

Piers Copeland, better known for his middle distance exploits, was second in 48.53 with Coventry’s Reece Middleton third in 49.24.

One of the biggest head-to-heads in the field events during the championships came in the men’s hammer.

Liverpool Harrier Osian Jones and Cardiff’s Jac Palmer have both gained the nomination standard for next year’s Commonwealth Games in Birmingham.

Jones went into the competition as the Welsh record holder, while Palmer was the reigning champion.

But Jones reclaimed the title he last won in 2018 by producing a third round throw of 71.25m.

Palmer’s best of 63.92m brought him the silver medal with City of Plymouth’s Jonathan Edwards claiming bronze with 60.21m.

The women’s title was won by Deeside’s Amber Simpson, another Welsh hammer thrower to have achieved the Commonwealth standard, who threw 61.45m ahead of City of Portsmouth’s Cerys Thomas with 54.78m and Ffion Palmer, of Cardiff, with 52.64m.

The long jump saw Cardiff’s Rebecca Chapman, who has been knocking on the door of the Commonwealth standard all season, leap out to 6.31m to take the women’s title ahead of Cardiff Archer Emily Thomas with 6.05m and Swansea’s Lauryn Davey with 5.86m.

The men’s title was a close affair, with Swansea’s Aled Price claiming the title by just three centimetres with a jump of 6.54m to edge out Neath’s Ceiron Hopkins. Morgan Keen Williams was third with 6.26m.

There was a far more comprehensive win for Bethany Moule, of Neath, in the javelin. Her winning throw of 45.02m was more than good enough to win the title.

Swansea’s Lauryn Davey was second with 39.19 and Phoebe Brown, of Blaenau Gwent third with 38.60.

Wow. I don’t know what to say!
I can’t thank everyone enough for their work to stage these champs 🙌🏾🏴󠁧󠁢󠁷󠁬󠁳󠁿
Completely overwhelmed by the levels of performances we’ve seen across the board this weekend – we go again in 2022 😏🔥

Cardiff’s Rhys Barkley won the men’s title with a throw of 49.64m. Aled Price claimed silver with 48.76 and Curtis Mathews bronze with 47.90.

There was another Cardiff success in the high jump where Jonathan Bailey struck gold with a height of 2 metres. Seb Clatworthy, of Chelmsford was second with 1.95 ahead of Gibril Carlisle, of Cardiff Archers, who also cleared 1.95.

All the results from the weekend’s Welsh Senior Championships and Under-15 championships can be found on the Welsh Athletics website.