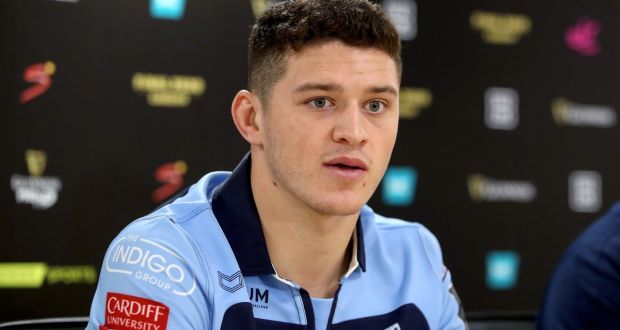 For Wayne Pivac, the name Botham always used to mean one thing – the smashing of his beloved New Zealand cricket team all around the park.

Thirty five years on from when Beefy the new baron was in his pomp, Pivac has asked Botham’s grandson, James, to repel the Georgians.

Botham junior/junior – son of Liam, who also played rugby for Cardiff – has fast-tracked “Jimbo” into an international debut on Saturday after only 13 games of senior rugby for the Blues.

The openside flanker was only called up by Wales on Monday and has been picked for a Test bow on the back of just two training sessions.

The 22-year-old will have a tough act emulating his grandfather’s sporting miracles, but Pivac insists he is ready for battle as Wales look to end a run of six straight defeats.

“He bowled most of the batting out single-handedly and scored 100 runs on many occasions. He destroyed New Zealand many times. He was a very good cricketer.

“We’re aware of James’ background. He has done very, very well in the short space of time he has been with us. For a young guy coming into a new environment, his levels of communication and confidence are impressive. Everyone has been impressed with what he has brought to the table.

“We’re all thinking the same thing – the guy can handle it and we want to give him a go. We feel he will be a guy who will step up to the occasion.”

Pivac is a man under pressure with Wales on their worst losing run since 2012-13.

And in search of a win he has ripped up his team to face whipping boys Georgia with 13 changes made from the side hammered by Ireland.

Former England cap and testicular cancer survivor Johnny Williams will join Botham – known as ‘Jimbo’ by his family – in making a Welsh bow, as will scrum-half Kieran Hardy.

Captain Justin Tipuric and full-back Liam Williams are the only players to keep their places from the Ireland horror show as Pivac puts his faith in youth.

“There is pressure to get results now, but that will be ratcheted up in the Six Nations and we’re aware of that,” said Pivac.

“We’ll learn a lot about the young players and how they fit into the group through to the next World Cup.”

One thought on “Wayne Pivac Banking On A “Beefy” Repeat From James Botham . . . Power, Pain, And Victory”