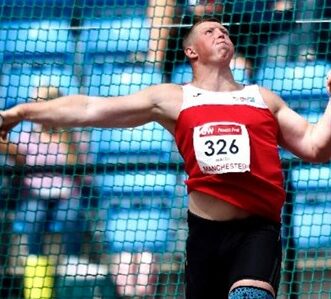 Harrison Walsh is off to the Commonwealth Games in Birmingham – an example to everyone that when one door closes, another one opens.

The 26-year-old from Mumbles was at the start of a promising rugby career, playing for the Ospreys and Swansea RFC when he suffered a freak injury on the field at the age of just 19.

The setback occurred just a week before he was due to play for Wales against England at Under 20 level.

Not only did the injury end his rugby career, but it left him with only partial movement and no feeling in his foot due to extensive nerve damage.

It was while the former loose-head prop spent two years attempting to rebuild his right leg and his rugby career, he met coach David Jones who suggested Harrison tried para-athletics.

Now, an international para athlete at discus and shot, Harrison is full of praise for Jones and Disability Sport Wales for helping him adjust to his new way of life.

"The fact I can educate myself here & have access to amazing facilities was awesome, it's unparalleled anywhere"
Harrison Walsh pic.twitter.com/C9FIgNjICo

“It’s hard to come up with the words to describe how good Disability Sport Wales are,” says Harrison.

Initially, he admits he found the transition difficult, but he soon found himself improving.

“It was really important for me to find another sport as it plays such a huge part in the lives of both me and my family,” he says.

“I was desperate for my passion for sport to remain and it was great to find that within disability sport.

“I really liked the motivation of getting better and better and it was important to continue that in another sport.”

Harrison’s professionalism and will to win stayed with him from his rugby days and Anthony Hughes, the national performance manager for Disability Sport Wales, was immediately impressed.

Da iawn pawb, the road to Birmingham has begun…

“Harrison had a thirst for knowledge, he was so keen,” says Hughes, who’s had a lifelong passion for disability sport.

“When I first met him, he was clearly a young man who was the ultimate professional. You could tell he was previously with a top rugby academy.

“After hearing about his promise from coaches in Swansea, I invited him to Cardiff so I could have a look at him myself. I was really impressed with what I saw.

“I always hear him telling some young academy athletes that whatever time they are required to arrive, they should make sure they get there at least 10 minutes early.

“That that sums up Harrison, for me.”

But it’s not all about sport for Harrison. When he is not competing at track and field, he is indulging his other passion – art.

Awesome to be apart of. Especially because I get to showcase where I’m from! 🏴󠁧󠁢󠁷󠁬󠁳󠁿🇬🇧 https://t.co/S7taZtEYng

His work – ink drawings – have been featured in an exhibition at London’s Zari Gallery, called ‘The Art of the Athlete’.

He says: “My work is in pen and ink and I tend to sketch when I’m away at training camps. It’s a bit surreal to be part of an exhibition but I feel really honoured to be part of it.”

His drawing only began in earnest after he suffered another disappointment – missing out on the Tokyo Paralympics because of an injury suffered just before the Games.

“Mindfulness and being present in the moment are some of the biggest things I’ve taken from Tokyo.

“I realised I hadn’t dealt with some of the stuff from my rugby injury as all the memories came flooding back as it was kind of a similar situation.

“It’s really forced me to understand myself and understand why I’m doing the sport and what it means to me in general.

“I think these setbacks have played a part in making me a better person.  I think it’s really important to strive to be the best.

“It’s important that everyone understands that sport is about fun and enjoyment.

“When I first started shot put and discus, I was really bad but I really enjoyed it.

“What I liked was it was the type of sport that you could really progress with, and I was determined to get better and better.

“My advice to anyone would be to find something they enjoy and then stick at it and continue to improve.”

Had Walsh stayed fit as a teenager and remained in rugby, he might now be a Wales teammate of Adam Beard, who was a fellow member of that Wales U20 squad seven years ago.

Instead, he is part of the Team Wales squad about to go for gold at the Games.

“The two sports are very different. Obviously, we can all see the differences between rugby and shot put.

“Sometimes it can get kind of emotional, but I honestly don’t remember a lot of rugby now because I have spent so long not in the game.

“I’ve spent a few years not being able to play rugby. So, in actual fact, I had lost touch with the sport.

“I started to actually enjoy watching rugby again during the 2019 World Cup. I couldn’t enjoy it before. It was too raw. I wasn’t done with it.

“But I think as soon as I started to really focus on throwing and saw some success from it, I was able to enjoy watching my friends playing rugby.

“That’s something I think that throwing has really helped me with – enjoying watching rugby again.